A private palace of art - Leighton House in London

Frederic, Lord Leighton (1830-1896) built the Kensington studio-house from 1865 on. With the Victorian art market booming, and domestic taste fascin­ating the middle classes, Leight­on needed to demonstrate his importance. After all, he was both president of the Royal Academy and chief exponent of the new Aesth­eticism.

Leighton House was to be his link to a special society, so #2 Holland Park Rd needed to be special. Fortunately Leighton was enjoying increasingly high fees for his paint­ings, and he also had family money. Leighton and his arch­itect, George Ait­ch­ison, chose the decorat­ive elements for their aesthetic effect, wherever they came from. The result incorp­or­at­ed styles from Arts and Crafts, Orientalism and Baroque.

Adding to the building for years, he end­ed up with one of the most talked-about houses in the country. Around the dome was a super frieze made up of tiny tiles, commis­sioned from artist Walter Crane (1845-1915), who did the work in Venice and then trans­port­ed the finish­ed product to London. William Morris curtains were loved. Orientalist Iznik wall tiles and the fin­est Arabian and Persian artwork were coll­ected on his regular trips to Turkey and Syria. Sometimes he comm­iss­ioned friends to buy the art objects abroad, including the Japanese and Chin­ese porcelain.

Leighton was a leading painter. His main interest lay in history painting and neo-classicism, and his most instantly re­cognisable work is Flaming June. Viewers also value his plein air oil sketches, made on his North Africa and Middle Eastern travels. 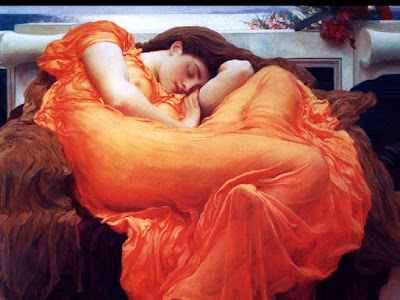 On Sundays, visitors gazed at the spectacular 1877 Arab Hall, with its golden dome, intricate mosaics, walls lined with beaut­iful Islamic tiles and indoor fountain. Colleagues attended one of Leighton's famous musical soirées, complete with its minst­rels' gallery. Intimate friends were invited to spend the evening in the red dining room with glittering Middle-Eastern ceram­ics.

Or they lounged in the private and relaxed Silk Room, with its paintings by Tintoretto and Millais. Certainly it was homo-social; he filled this cosy room with pieces by friends such as Millais, George Frederic Watts, Singer Sargent and LawrenceAlma-Tadema.

Was Leighton a dandy? Presumably yes. But note three things. Firstly his young women were expected to access the studio through a separate Model's Entrance in the back. Leighton House may have been de­signed to showcase the artistic avant garde, but his class relat­ionships were still Vic­t­orian. Secondly for all his generous support of fellow artists, Leighton seemed to have had little interest in women painters or their work. Finally Leighton lived alone in his palace, occupying the house’s one, very stark bed­room on the first floor. Thus he was showy, public and extra­vagant, but private and a bit grim as well. 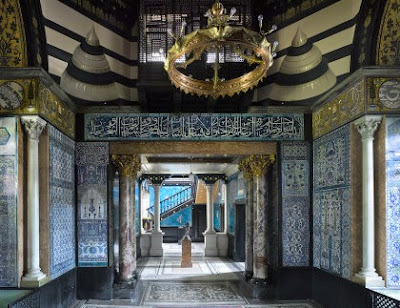 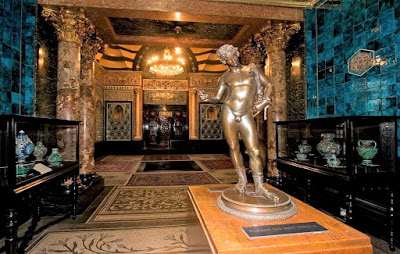 After Leighton's death in 1896, his one-bedroom house didn’t sell. So his sisters had to focus on the house's vast art coll­ection, in order to carry out the bequests in their brother's will. Following the Christie's sale, his works by Constable, Delacroix and Corot were bought around the world. During this empty time, the house’s ceilings were covered in lining paper and painted dull bronze emulsion. The wooden flooring was covered with protective layers.

After WW2, Leighton House underwent well-meaning but sloppy rest­or­ation. That changed in 2008-10, with a £1.6m fund from the Roy­al Borough of Kensington & Chel­sea; a team of curators, crafts­men and architects did a very careful restor­at­ion. Working with old photographs, they strip­ped the house back to Leighton’s original vision. It is now a testimony to a particular moment in British cultural history.
Many of the key paintings which were sold were loaned back, and now occupy their original positions. Where furniture, tiles, wallpaper and fabrics were missing, facsimiles have been commissioned from traditional craftsmen.

Enter via the splendid Arab Hall and see the central dome, newly restored with gold leaf. There are ottoman seats which have been re-upholstered in a William Morris Willow fabric, clearly ident­ifiable in photographs of 1895. And from those photos, historians set about re-creating the wallpaper that Leighton had himself commissioned. Other highlights include the reproduction of finely embroid­ered upholstery, designed by Gertrude Jekyll. It is a place of tactile luxury!

Leighton House Museum is surrounded by a group of other studio-houses, all built during the later C19th. Today the museum has a collection of 76 oil paintings by Leighton, includ­ing large-scale finished works produced for exhibition at the Royal Academy.

There are only 3 extant Leighton sculptures, but their influence over younger British sculptors was profound. The examples at the museum were pres­ented in 1900 by Leighton's friend and close neighbour, artist G F Watts.

700 of Leighton's sketches were assembled in the early years of the C20th, shortly after the establishment of the museum. The collection demonstrated his skills as a draughtsman. 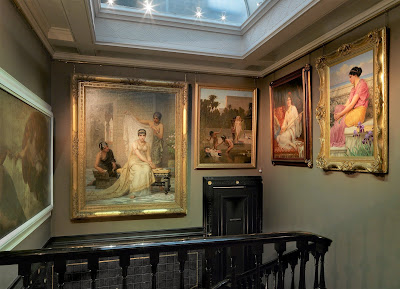 Leighton collected paintings by his friends and colleagues

During the High Victorian period an informal group of C19th art­ists based in West London was called The Holland Park Circle. As well as Frederic Leighton, it included George Frederick Watts, Luke Fildes, Marcus Stone, Val Prinsep and William Burges. See the group’s archives, plans, photographs and drawings. And see the group of photographs by Julia Margaret Cameron whose family had close associations with the Holland Park artists.

The museum holds a collection of c100 pieces of pottery by Wil­l­iam De Morgan and his later associates. Following De Morgan's death in 1917, this collection was presented by Ida Per­r­in who paid in the 1920s to build the Perrin Gall­ery (at the east end of Leighton House). His wife,  Evelyn De Morgan (1855-1919)'s watercolours on paper, remain.

The House Museum shows Leighton's life as a gentleman, art­ist and collector. The fascinating coll­ect­ion of the arts by Leighton and his generation is still growing.

Hello Hels, Leighton House sounds like the equivalent of Olana, the 1872 New York house of Frederic Church, the Hudson River School painter. There is much Oriental exoticism mixed with other varieties of Victorian Eclecticism. Olana now includes the restored house, Church's studio, hundreds of paintings and artworks by Church and his friends, and an extensive grounds.

Getting back to Leighton House, I now have one more must-see spot for my next (and long overdue) trip to England.
--Jim

All that Victorian lushness is normally too much for me, but Flaming Jane is gorgeous.

Leighton House is a surprising gem. I loved visiting and your description and photos brought it all back.

I had never heard of Olana, but from the photos, it does indeed remind me of Leighton House. If such a house surprised people in London, I bet it knocked the socks off people in the USA. And even more surprisingly, the two houses were maintained after the artists' deaths.

Flaming Jane (1895) was sensational, and was recognised as Leighton's most famous work. But although Leighton filled his home with important PRB works, he was not a member of the Pre-Raphaelite himself. In fact the PRB's decades of glory were from 1848 to perhaps 1878.

It IS a surprising gem! I lived in London for a few years, but had never heard of the house-museum back then. Much later I was taken on an organised tour and found that the house's 1877 Arab Hall, in particular, had been preserved very sympathetically.

Such beauty is to be admired, and it is very beautiful, but such wealth spent by one person in such a manner is not to be admired. Still, aren't we all the better for having it to admire.

I find great wealth offensive, particularly because rich families and businesses think of taxation as an optional cost in their lives. But at least if wealthy citizens feel they have an important role in community and cultural development, they will patronise the arts, educational services, health services, immigration, museums etc.

The trouble is that Thump will open elite golf courses and elite hotels, but I don't call that community development.

It is always lovely to hear that a property has been restored back as far as it can to its interesting point in history. And a joy to hear the original works are loaned or given back to be displayed there.

the difference between restoration and destruction of important buildings is very often a fluke. After Leighton's death in 1896, his house was put on the market but, as it happened, it didn’t sell. It was only by default that his sisters focused instead on the house's vast art coll­ection. Thank goodness!

John Ruskin claimed that he had burned a mass of works of eroticised art done by JMW Turner during the last 10 years of the artist's life. The loss to the world was incalculable.

It can also work the other way. Franz Kafka gave explicit instructions that all his work be destroyed after his death; it was only saved by the heroic decision of Max Brod, Kafka's literary executor.

This is, of course, a private museum and the entrance fee's are fair enough. However, it brings into focus the great value of the mostly free museums and galleries we have on hand in the UK in general and London in particular.
CLICK HERE for Bazza’s recondite Blog ‘To Discover Ice’

Agreed. If there is an entrance fee, especially a substantial one, the museum will be keeping out the very people it should be attracting: working families, school groups, undergraduates, pensioners etc. Then we are back to the original problem of the moneyed elite.

Perfect information & the blog is almost perfect keep me updated with such kind of upcoming blogs.
Best Commercial Architects in Mumbai

Many thanks, but not perfect. For example I don't know why Lord Leighton always lived alone. Nor do I understand why he chose to live in rather bleak conditions.

Hi Hels - a delightful introduction to the House/Museum ... and on my return I will definitely visit. It looks quite incredible and I must definitely go there on my return. I'm really looking forward to seeing it.

Re the entry cost - it's in line with other museums ... so not exorbitant - yet a cost ... most definitely worth it by the look of it ...

Thanks - delighted to read this - cheers Hilary

I have seen other beautifully designed and presented homes from the late Victorian era, presumably because people wanted to entertain their important guests in an atmosphere that showed how cultivated the hosts were. There were/are stunning cultural salons in Vienna, for example.

But Lord Leighton wanted something more than a cultured atmosphere.

The 2018 renovation plans include the provision of new accessible entrance to the Museum, a dedicated drawings gallery to display a selection of Leighton’s work and a collections store. The proposed work not only improves the museum’s functional space but will better display the historic aspects of the building, including the butler’s pantry in the basement and the discrete stair and ante room to give models access from the ground floor up to the studio. Miscellaneous modern alterations and infill from the 1950’s under the Winter Studio will be removed and the area opened up to provide a multipurpose space, giving a view of the original column structure which supported the Winter Studio.

The east wing which today fronts the Holland Park Road is formed by an extension built in the 1920’s designed by Halsey Ricardo, himself an interesting late Victorian architect with a particular interest in ceramics. The extension was designed to provide more exhibition space and will now be opened up at ground floor level to create a new reception area with access back to the historic entrance hall and to the new lift and main staircase.

Many thanks. I had no idea that vast renovations were necessary, above and beyond what all mid-Victorian architecture would require. But it makes perfect sense to better display the historic aspects of the building.

Will Leighton House be closed during renovations?