Queen Victoria’s unsatisfactory grandson, Prince Albert Duke of Clarence, second in line to the British throne, desperately needed a bride. Earlier attempts to marry this useless duke off to foreign princesses had failed, so Queen Victoria was relieved when, in 1891, Mary of Teck (1867-1953) loved the prospect of becoming Britain’s queen and immediately accepted the duke’s hand. But this plan had to be abandoned when the duke died of pneumonia soon after the engagement. Instead Mary became engaged to his brother, the Duke of York, who in 1910 was crowned King George V and she his queen consort. 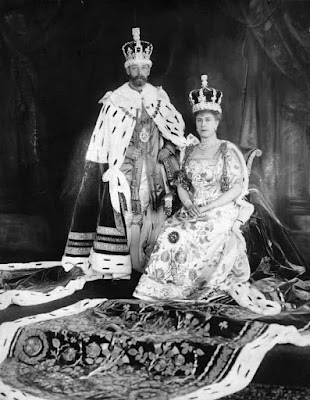 King George V and Queen Mary
at their coronation, 1911

Queen Mary of Teck and King George V had 6 children, of whom 5 survived to adulthood. Mary lived through the reigns of her sons, King Edward VIII and King George VI. In 1952, her eldest grandchild became Queen Elizabeth II and in 1953 Queen Mary died at Marlborough House, aged 85.

Royal librarian Owen Morshead asked James Pope-Hennessy (1916–1974) to write a biography about the late Queen Mary. Pope-Hennessy had been the editor of The Spectator, author and biograph­er. He was the brother of Sir John Pope-Hennessy, director of both the V&A and British Museums.


James was very well connected. He had formerly shared a flat with the spy Guy Burgess in Ladbroke Grove, London and in 1960 was invested with the Insignia of Commanders of the Royal Victorian Order by the Queen. He had previously been in a relationship with Harold Nicolson, a former diplomat, writer and MP. Author James Lees-Milne was also a former lover of Pope-Hennessy.

James Pope-Hennessy began his 3 year project in 1955, two years after Mary died. It took him to many royal courts in Britain and Europe, meetings old royals, current and retired courtiers and Queen Mary’s staff. He included sharply observed encounters with the Duke and Duchess of Windsor, Duke of Gloucester and a young Queen Eliz­ab­eth. Plus he had access to many private documents. His book, Queen Mary, was set to be a classic of royal publishing.

The interviews revealed as much about the interviewer as about the late queen. At Sandringham, Pope-Hennessy was a bit arrogant about the suburb­an, middle-class York Cottage into which George V and Queen Mary lived for most of their reign. And some reviewers sugg­ested that Pope-Hennessy’s judgment was not always to be trusted eg he thought the Duke of Windsor was very intelligent and liberal-minded.

The interviews were fascinating. Pope-Hennessy spent a weekend with Prince Henry Duke of Gloucester at Barnwell Manor. The Duke was very kind and entertaining, and he sat with the author until the wee small hours of the morning, gossiping about family. Queen Mary spent the war at Badminton so the Duchess of Beaufort interview was also important. She described the queen sitting in the air-raid shelter at midnight, fully dressed in pearls, with her Lady.

Inevitably the picture that emerged was not altogether favourable. The Duchess of Devonshire, who was Mistress of the Robes for 40+ years, claimed that in all that time she only once had a relaxed conversation with the queen. Maggie Wyndham, a Woman of the Bed­chamber, was sometimes made to read aloud to the queen for 7 hours non-stop. Lord Claud Hamilton said that Queen Mary was ‘one of the most selfish human beings I have ever known’.

The cold, proud queen dressed up in diamonds for dinner at Sandringham every night, even when alone with the king. And her staff knew when she admired something in other peoples’ homes, the hosts had to give it to her.

The author soon realised that these interviews in themselves formed the mat­erial for another book. But because of the awful secrets they contained, Pope-Henn­essy wrote: I kept a private and confid­en­t­ial file recording in considerable detail the convers­ations I had both with Queen Mary’s immediate descend­ants, related German, Dan­ish and Norwegian royalty and with sur­v­iving members of the Court of King George V and Queen Mary. None of these strictly confid­ential interviews could be published until a lapse of 50 years.

In the end James' very informative book biography was released in 1959, six years after the queen’s death.

Pope-Hennessy’s brutal death
In Jan 1974 thieves ransacked the home of James Pope-Hennessy, 57, following newspaper reports that he had been offered $150,000 to write a book about Sir Noel Coward. He was bound and stabbed by three men. During the attack, James’ young valet Leslie Smith entered the house and was immediately set upon, before the assailants fled the scene. Smith staggered into the street and shouted for help from local labour­ers. He was taken to hospital with a serious head wound and surv­ived. Pope-Hennessy was also taken to hospital but immediately died from multiple stab wounds. Queen Elizabeth II was informed and sent a condolence message to James’ brother, Sir John. 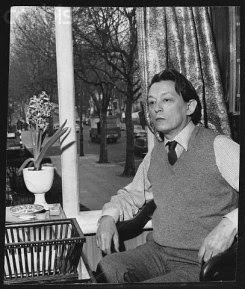 The three men, all rent boys, were arrested and charged with the mur­d­er. One of them, John O’Brien, had been living at Pope-Hennessy’s flat for a few months prior to the incident. Since both Pope-Hennessy and his valet were users of the rent boys in Picc­ad­illy, they had both been in a sexual relationship with O’Brien.

In the July 1974 trial, a deal was struck and the three defendants pleaded guilty only to manslaughter. They men received further sentences for robbery, G.B.H and burglary.

Mostly the candid observations, secrets and ind­iscretions in Pope-Hennessy’s notes were indeed kept private. Now published in full for the first time and edited by royal bio­grapher Hugo Vick­ers, this is a fascinating portrait of the eccen­tric ar­istocracy. Hugo Vickers published the interviews, along with his well edited text.

I enjoy reading biographies, but what if they too had been self censored by the author, or by a court official?

That has always been true, yes. Mostly the reader will never know if all the researched material was published ... or if the difficult material was never recorded, if the papers/tapes were archived or totally destroyed.

Pope-Hennessy was a brave writer, archiving his recorded interviews and banning access to them for 50 years. After 50 years, the interviews might well have been lost, faded or mouldy.

Was Mary a royal before she married King George or a member of the aristocracy?

I too would not have known before writing this post.

Princess Mary was born to Francis, Duke of Teck in Germany, and was thus a very minor royal on his side. Here mother was Mary Adelaide of Cambridge, granddaughter of King George III and therefore a proper (albeit minor) royal.

One wonders why we still need a Royal family but, I suppose, Elizabeth II has redeemed the office during her reign.
Mary of Teck was a nasty woman who, fortunately is a side-line of British & European history.
I love the use of 'unsatisfactry' to describe Prince Albert!
CLICK HERE for Bazza’s luminous Blog ‘To Discover Ice’

Meantime, I didn't like Queen Mary of Teck either, but she must have had a substantial influence on Edward VIII (and George VI). And we know what happened there!!!

Re young men being less than wonderful. I remember when my own sons were 17... lovely boys but not very tidy, polite or study-focused. Now I thank my daughters-in-law warmly, for making my boys mature and responsible :)

Hello Hels, I am always careful when reading biographies and especially collected editions of letters to watch out for omissions and artistic editing--the material can be slanted in any direction. 1974 doesn't seem that long ago, but that is when James Pope-Hennessy had to be subject to that sort of blackmail and murder. What is surprising is that even if he had received all that money for the book, it certainly would not have been lying around the house in sacks--maybe there is more to the story than we realize.

A coincidence: So soon after your Hogarth post, I just finished reading a weird fictionalized biography of Mrs. Thrale, and William Hogarth and his dog Trump were prominently featured in the book.
--Jim

thank goodness some people are careful not to accept every word in biographies as gospel truth. With the exception of auto-biographies, I suspect biographies are assumed to be scholarly. I read "Queen Mary" as an undergrad and never thought to second-guess Pope-Hennessy's findings.

There are no coincidences in blogging :) There are so many mentions of William Hogarth in the bloggy world and of Donald Trump in the general press, examining Mrs Thrale, William Hogarth and his dog Trump is inevitable.

I knew nothing about Pope-Hennessy's life or hideous death, so I can see some reading in my near future. However what happens if his court reports and newspaper stories are themselves redacted or dishonest?

Talking of coincidences, a book by Alexandra Churchill will be published this week called "In the Eye of the Storm: George V and the Great War". Amongst other things, it discusses the relationship King George and Queen Mary, and the relationships between these two parents and their six children.

Hi Hels - thanks such an interesting review - I've made a note to get a copy when I get back to the UK ... fascinating insight into life you've given us. Then the new book too - yes lots to read and to think about - cheers Hilary

Thank you. I am retiring at the end of this academic year, which is a bit of a worry. However I am creating a reading list of books from history and art history blogs that I have loved.

I had heard that she was rather self absorbed person who was VERY conservative in her outlook but otherwise well matched with George . What I find appalling about her was her almost kleptomaniac love of diamonds which she got for a song from members of the Russian royal family when they were very much at the mercy of the British royal family and government . I dont have much sympathy fro any of them but as a hum an being she was a nasty piece of work.
Apparently though the endless attendance at openings etc and touring the country made bother here and George rather more popular and accessible than the royal family had been fro a long time. They were both rather dour humorless people who were VERY duty conscious . Maybe some of this has come down in our present queen ? Certainly it didnt in the Duke of Windsor and the duke of Kent who died in a plane crash and was a rather rackety type.

Duty conscious, dour, rigid, conservative, remote in their parenting... sounds like most branches of European royal families. Not surprising, really, since all the royals are close cousins - the "father in law" was Christian IX of Denmark and the "grandmother" was Queen Victoria.

The book sounds really interesting as is the tale of James Pope-Hennessy.

The Pope-Hennessy story remains under-explained still, yes. Even the use of the word "rent boys" in the official records sounds dodgy.