So many thanks to Bronwyn Watson who wrote about the influential member of De Stijl (1917-1932), the architect and designer Gerrit Rietveld. Rietveld had a great belief that furniture should be democratic — that is it should be simple, clean and functional, not ostentatious, not dripping with status. Therefore the furniture had to be cheap to make and should not have required the top craftsmen in the nation. His furn­iture had enduring appeal because it valued concepts like truth to materials, honesty to construction, revealing structure, no upholst­ery, nothing unnecessary, it was flexible and had movability, and it did not use extravagant materials. Note that this furniture was that nothing was hidden - it had a pared-back sensibility.

De Stijl painter Piet Mondrian went even further in describing a theory base for the movement. In the middle of WW1 carnage, he had the utopian belief that art could transform life by resolving all conflicts. He aimed for pure abstraction with a framework of formal geometric patterns that became objects of contemplation on the cosmic order. 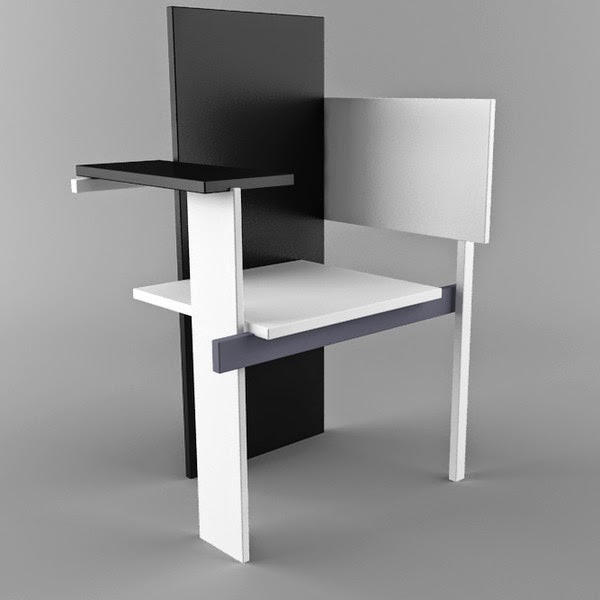 Berlin Chair by Rietveld, 1925
De Stijl
National Gallery of Australia
How comfortable was this pared-back, no upholstery chair?

What made De Stijl immediately recognisable was that these Dutch artists and architects shared a collective passion for primary col­ours and black and white, and for the geometric forms of the square, the rectangle and the straight line. They were full of idealism, but idealism based on pure geometric abstraction. And on a strong asym­metricality.

Rietveld’s Berlin chair (see photo above) was designed for an art exhibition in Berlin in 1925. Note this was Rietveld's first asymmetrical chair. And note that each element was painted in a single colour, black, white or grey.

De Stijl's design language all sounded very familiar to me. The Arts and Crafts movement (c1870-1914) advoc­at­ed economic and social reform; ideology and practicalities were more important than a desire to create top-end, expensive decorative art objects. The designers wanted to avoid industrialised objects that demeaned traditional craftsmanship, so handcrafted work became val­uable in its own right. Arts and Crafts theorists valued the concept truth to materials.. with respect to the profound and innate characteristics of materials. In seeking essence and simplicity, the Arts and Crafts movement rediscovered the valuable qualities in simple and common materials. 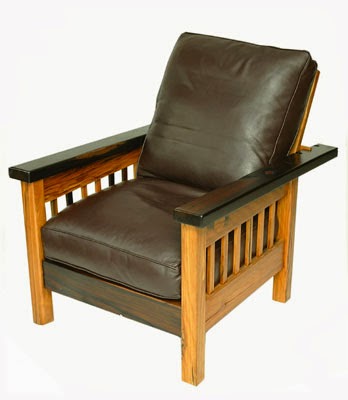 Not only did machine-made products demean the craftsmen; machines also created mass-produced, poor quality substitutes of the hand­crafted arts. Yet handcrafted work was slower and therefore more expensive than machine­-made work. So it is ironic that Arts and Crafts designers found they were pricing themselves out of the very family market they had so keenly aspired to.

The Morris chair (see photo above) had a seat with a hinged reclining back and high armrests. The reclining angle adjusted through a row of pegs and holes in each arm. Or it could be controlled by a metal bar set in hooked back racks. In a design where comfort and versatility were paramount, this chair was most popular in c1890.

Depending on your perspective, the Bau­haus movement (1919-1933) also either gave birth to, or nourished modern design, a de­sign style recognised by its clean, simple lines and truth to mater­ials. The honest and integral design style allowed Form to Follow Function in the design process. So normally hidden materials such as steel had be exposed, and not covered, within the interior framework of furniture.

Bauhaus designers realised that most objects in the post-WW1 era were going to be machine-made. So they adapted the form of the objects to modern industrial processes and materials. The forms in the Bauhaus chairs (see photo below) were expected to be simple and light without decorative addit­ive, giving the sitter comfort, versatility and a fair price. Modern materials like steel, glass, bent wood and serviceable leather were preferred over richer, heavier mahogany etc. 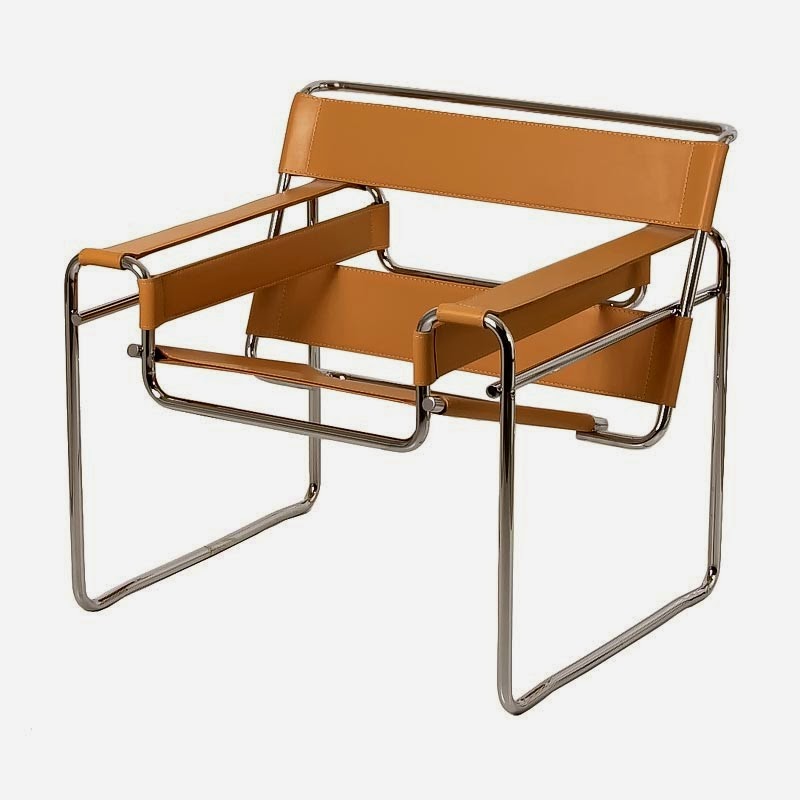 In the end I needed to pull these three separate but seemingly overlapping movements together. The director of Bauhaus Walter Gropius decided that his academy had to generate simple, rational designs for mass-production that would be available to ordinary working families. He wanted designers like Marcel Breuer, Paul Klee, Wassily Kandinsky and Laszlo Moholy-Nagy, whose thinking already incorporated existing modernist movements like De Stijl, and who saw the machine as a force for aesthetic and social good. Bauhaus designers created prototypes for industrial production, their work based on simple geometric shapes and primary colours.

The overlaps and influences between these movements is fascinating. And, so intriguing to see how the various styles and designs reflected the industrial developments of the day as well as taste and affordability.

Our friend has a Z chair by Zietfeld in his apartment which he partners with a French baroque writing desk. A bold positioning of two very different styles and periods but which makes for exciting interior decoration.

Three elements must have seemed very unusual in De Stijl furniture - a. straight vertical and horizontal lines, b. planes that did not intersect, and c. strong asymmetry. Not comfortable, probably.

the Zig Zag chair or Z-form is the starkest piece of furniture I have ever seen. So it would look interesting, pairing it with over-the-top French baroque furniture :)

Of course the De Stijl theorists may not have approved of your friend's mixed taste in the decorative arts. Those writers were soooo ideologically driven.

It is interesting that what was modern, abstract and ideologically rigorous in De Stijl days was, only a few years later, too uncomfortable for Bauhaus designers.

Even though Mies van der Rohe and other designers liked the simple rectilinear shapes and the use of only 3 colours, they eventually put Function Before Form at Bauhaus.

Hello Hels, Lip service may have been given to functionalism, but it is apparent that these furniture designers were more interested in aesthetics and sculptural quality. The Rietveld chair is a perfect example--fascinating to look at, but almost certainly torture to sit in. Simple geometric shapes may have been socially redeeming, but unfortunately that is not how the people who have to sit in the chairs are formed.
--Jim

With the exception of the Morris chair, neither of the other two look at all comfortable. I have sat in modern expensive designer chairs at different times and never have I found one to be comfortable.

I was going to suggest that De Stijl theories were relevant to paintings, sculpture and architecture, but NOT to functional arts like furniture e.g they valued total simplicity and abstraction by using only straight horizontal and vertical lines, and rectangular forms."

But if the translation of stijl is a post, then it makes sense that their designers would be PARTICULARLY intrigued by the construction of crossing joints eg in woodwork.

I think I have just contradicted myself :(

I am quoting Design History Mashup:

"De Stijl art forced the viewer to ponder about their relationship to the world, relating to the form, colour and space surrounding them. De Stijl designers believed that with this, they could re-idealise the world, achieve equilibrium and create a future society with real unity and equal rights. The ubiquitous grids of De Stijl art and architecture completely rejected organic nature and showed estrangement towards classic literature."

The Morris Chair was elegant and comfortable, but could the average family afford one? Or two.

undoubtedly Morris sought to re-dress class inequality and improve society by reinstating past values and by providing affordable art for all. But I cannot find any prices.

Old House Journal 1975, on the other hand, says the chairs were enormously popular; almost every home had a morris chair of some kind by the turn of the century.

Nice Info! There are many people who wish to get the scrap metal services just to earn some money on it by selling it at the junk shop.

This is a few days after the fact, but the discrepancy between the Morris chair's expense and popularity might be that the term "Morris chair" became generic. Here's an article about the Stickley version of the classic Morris:
http://www.finewoodworking.com/projectplans/011101038.pdf

Great posts, thanks and keep up the good work.

very useful article, many thanks.

Now I need to ask another a question. Was the name "Morris Chair" ever patented by Morris & Company? If not, then Stickley, Sears Roebuck and others could certainly copy, modify and manufacture a new type of Morris Chair in the USA.