In this blog I've been interested in many famous citizens who made the long and dangerous trip to Australia by ship. In 1836 Charles Darwin visited Australia and wrote up the experience. Lola Montez knocked the socks off the diggers in the Victorian goldfields in 1855. Prof Louis Pasteur was supposed to arrive in Sydney in 1891 to solve the problem of rabbit plagues but he became ill at the last moment. So he sent his brilliant nephew Dr Adrien Loir instead, with a lasting impact on Australia and on the Divine Sarah Bernhardt who was also visiting. During her first tour of Australia in 1926, Anna Pavlova and her dan­cers visited Melbourne, Sydney, Brisbane and Adelaide to acclaim.

Now a book has come out that commands attention. The First Celebrity: Anthony Trollope’s Australasian Odyssey by Nigel Starck was published by Landsdown Media in 2014. As a young adult I read and loved Trollope’s novels, particularly his six Barsetshire novels. I had no idea that Anthony Trollope (1815–1882) visited Australia or that he was not young when he made the long, uncomfortable and rather dangerous trips. He spent a total of a year here in 1871-72,  and then again in 1875. 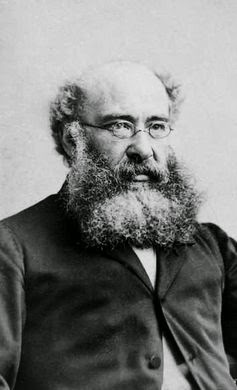 Photo of Trollope in Australia, 1871-2
Photo credit: The Conversation.

Trollope, who came with his wife Rose and staff, had two reasons to visit, one familial and one literary. Clearly they wanted to visit their younger son, Frederic, who was a sheep farmer in NSW. I don’t know why Fred’s sheep station, Mortray, was failing, nor do I know what dad thought he could do about it.

Interested in the widespread British empire, Trollope had a contract with his publishers for a book on the Australian colonies. Plus he agreed to use any material he gathered for articles in the Daily Telegraph. So all that travel on horseback was not wasted. Anthony Trollope wrote his novel Lady Anna during the year away, describing "descending mines, mixing with shearers and rouseabouts, riding his horse into the loneliness of the bush, touring lunatic asylums, exploring coast & plain by steamer & stagecoach".

No-one travelled as much as Trollope. In August 1871 he went to Queensland and in October visited rural New South Wales. In Sydney he attended parliament, and in December he gave advice to the Legis­lat­ive Assem­bly select committee on the civil service. In Melbourne he gave a lecture to a very literate audience of 3000 on one of his favourite topics, English Prose Fiction as a Rational Amusement. In January 1872 he was in Tasmania. 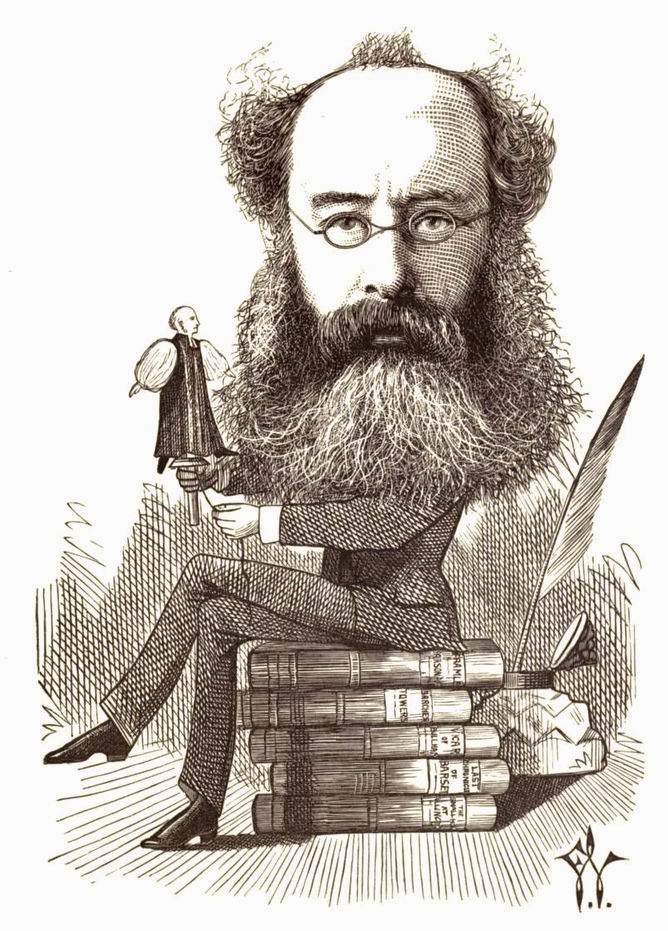 Which Australian or New Zealand newspaper first published this cartoon of Trollope?

Poor Trollope. He was constantly criticised in the Australian press and he seemed to be even less popular with his son Fred and Fred’s colleagues. Perhaps Australian journalists were too sensitive to writers coming from the Mother Land and presenting Australia in a bad light. They were wrong about Trollope, I believe. He appreciated a lot of Australian life, even acknowledging that despite Tasmania’s rather vicious convict past, he would prefer to live in Tasmania than in any other part of Australia. He always reported that Australians were energetic, friendly and helpful.

In July 1872, he left Australia aboard the SS Macedon for several months in New Zealand. Back at home in 1873 he published a two-volume book about his travels called Australia and New Zealand. His overall impression of New Zealand was positive - in the book Trollope suggested New Zealand had the potential to become a new and improved version of England. However he was less fond of the New Zealanders' propensity to get drunk. Regularly!

Trial-by-Australian-media must have failed because Trollope re-visited Australia in 1875 and wrote many articles for the Liverpool Mercury. He used his Australian experiences in two novels I have never read: Harry Heathcote of Gangoil (1874) and John Caldigate (1879). I now think these novels, alongside his books about the West Indies (1859), North America (1862) and South Africa (1878), must have proved less popular than the Trollope books I knew and loved.

It is interesting that when he came to Australia, Trollope’s reput­ation at home had already peaked. Clearly he had no idea that the novel that would do best financially, The Way We Live Now 1875, was yet to come. Just as well he got on with it; he died in 1882. In his obituary, the Sydney Morning Herald sniffily wrote that “Trollope had no place in the front rank of the great English writers of fiction”. Colonials don’t forgive or forget slights easily, it would seem.

Note that all the novelist’s direct descendants live in Australia!

2014 was a good year for Trollope watchers. Trollope Down Under – an Anthony Trollope tour in Australia, was organised for March 2014. The 14 day tour was perfectly timed for Trollope scholar Professor Nigel Starck (University of South Australia) to launch his book!

Hello Hels, Perhaps the Australians had nothing against Trollope, it's just that they were leery of any foreign author coming on a tour of inspection. The general pattern was to take a look around, then state with considerable vitriol that things were better in the home country.

Even now, America has not completely recovered from the singeing that was the result of Trollope's mother Frances visiting in the 1830's. Dickens was not much kinder, but I seem to recall that Kipling's American Notes took a less critical view, although the book is still very perceptive.
--Jim

Family relationships are always so tricky, even for famous authors. What hapened to Fred?

I bet Frances Trollope's books, especially Domestic Manners of the Americans (1832), went down like a lead balloon in the USA.

Frederic was sent to Australia as a teenager, to clean up his act and to return to his parents in the UK at 21. Instead he loved Australia, married a local, did not invite his parents to the wedding, had 8 children and ran 10,000 sheep. As far as I can see, Frederic didn't even want to visit the UK again.

There are two sources of information about Frederic. The more focused analysis is The Life and Letters of Anthony Trollope's Son in Australia which was edited by Peter D Edwards (Queensland UP 1982). A very wide ranging book is Brief Encounters: Literary Travellers in Australia 1836-1939 by Susannah Fullerton (Picador 2009).