My paternal grandmother’s descriptions of living in the East End of London were fascinating, but I never knew how accurate her memories were. And there was no way I was going to discover details about my grandmother by reading about royal, noble or wealthy families, from army or church records or even from newspaper clippings.

So for me, the most interesting part of reading historical census documents was discovering how ordinary people lived, people who were born, worked and died without any fuss being made. A 1901 census re­turn succintly described the living conditions in­ King Edward St Whitechapel. Then in the Metropolitan Borough of Stepney, the house gave a safe haven to five families, all the adults being immigrants from what is now Russia, Belarus, Ukraine or Poland.

This should not surprise us. The 1901 Census noted that Jewish families were desperate to leave Russia's Pale of Settlement and that 90% of Britain’s 150,000 Russian and Polish Jewish newcomers settled in London’s East End. 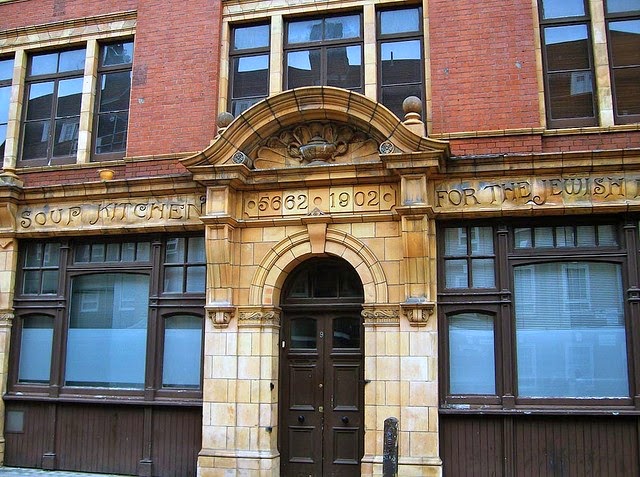 Jewish Soup Kitchen, Brick Lane, Spitalfields
opened 1902.
Today the sandstone facade and sign are original, but the building itself has been converted into luxury flats

The building was divided into flats, but there were still only eight rooms in total. Sarah and Max S shared their two rooms with their two children and a lodger. Jacob and Heide B had one room. Elijah and Florrie S shared their room with their child. Isidor and Rebecca P and their six children squeezed into two rooms. Isaac and Rosa H, six children and Isaac’s adult brother fitted into the final two rooms in the house. 27 human beings!

Census unformation was given about every resident’s name, gender, age, country of birth and occupation. And for that I am grateful. But wouldn’t it have been useful to known if all five families shared one kitchen, bath and wash-house? Did any of the adults in the house speak English? Did the adults have any other language in common with each other eg Yiddish, German, Polish or Russian? How long did each family live in King Edward Street, before they moved on to a bigger flat? Did the 27 human beings roster the one toilet across the alley, to avoid overcrowding?

Conditions at home may have been appalling, but community facilities were booming. I know there were four synagogues and at least one school within easy walking distance from the Whitechapel house. A soup kitchen was founded in Brick Lane and a Temporary Shelter was opened in Leman St, mainly for new comers. Social clubs included Russian tea rooms and libraries. Sick visiting organisations supported struggling families and a Jewish burial society tended to the bereaved. From the late-1890s, Pavilion Theatre (later demolished) in Whitechapel Road showed Yiddish language plays to enthusiastic audiences.

Of all the facilities and activities available, my grandmother remembered The Pavilion Theatre, music hall and pantomimes most fondly. 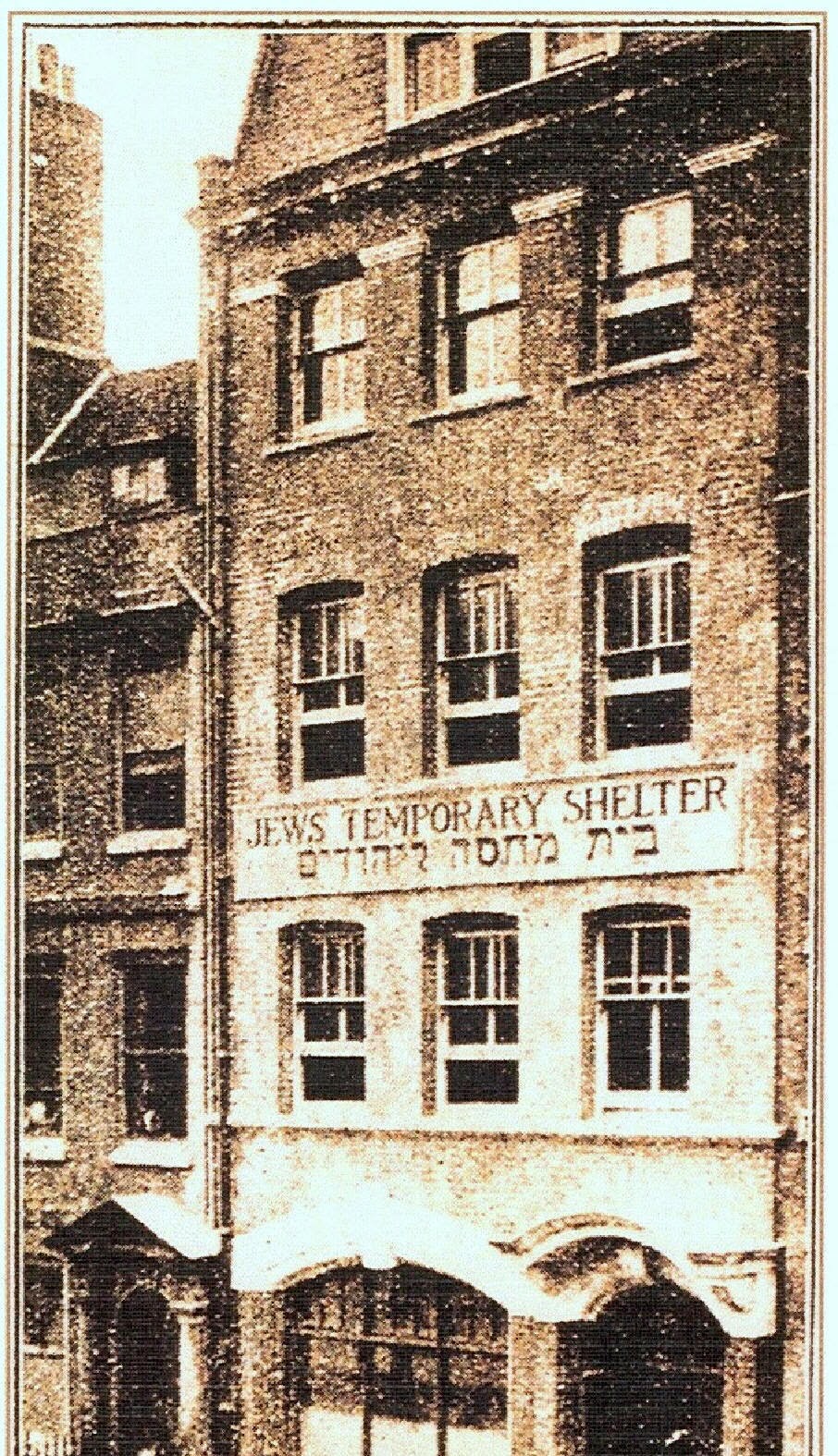 The marriages must have survived because my grandmother later found herself surrounded by four more healthy siblings, supported by their father’s salary as a boot finisher. One sibling went eventually to live in Chicago and established himself independently of his family. (Was he in trouble with the law, or did he made someone pregnant accidentally?) The rest of the family emigrated to Australia just as the outbreak of WW1 was stopping all civilian shipping.

Actually it wasn’t very different for my grandmother when she arrived in Australia, at least regarding external toilets. Pan closet toilets in Melbourne’s crowded inner suburbs generally backed onto a lane and were emptied weekly by a nightman. And like the UK, the toilet was generally built as far from the house as possible, to avoid spreading infections. But there WAS a big differ­ence. Inside the family’s own back yard in Melbourne, the one toilet was used exclusively by the one family. 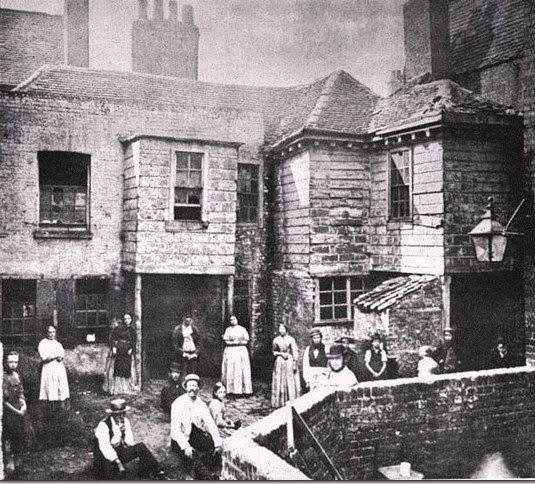 The Whitechapel Boys was a group of young men that went on to become some of my favourite English writers and artists of the era. I will mention only three: Mark Gertler (1891–1939) was born and raised in Spitalfields, Isaac Rosenberg (1890–1918) moved to Stepney as a school boy and David Bomberg (1890–1957) grew up in Whitechapel. From their intensely impoverished but acculturated world, The Boys used the Whitechapel Library as a meeting place, their discussions contributed to the founding of British Modernism. Strongly iconoclastic, the painters and sculptors in the group began to experiment with dynamic form and abstraction while the writers and poets searched for innovative prose to express their philosophical and political views. My grandmother (also born 1890) didn't remember them but she would have been proud of how her exact contemporaries overcame the constraints of living in the impoverished East End to become a vibrant avant garde. 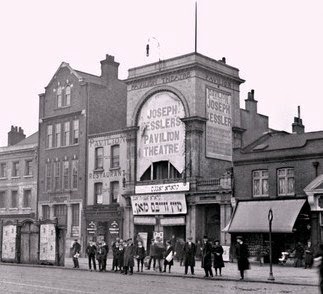 I heard you give a paper on the Cable St riots by Sir Oswald Mosley and his Fascists. 1936 showed that the East End of London was not always a warm, happy place for British Jews.

Dear Hels,
An interesting article. My grandfather's family owned a lot of property in Shadwell, and Bromley prior to the population explosion. Apparently with the influx of eastern european immigrants arriving, my irascible great grandfather would sally forth with his sons to dispense charity to all teaching them (his sons) that differences in ethnicity and religion were irreverent when it came to helping others in need.
One member of the family eventually married into a sephardi family. I believe that they had been in London since the 18th century.
Kirk

An interesting and personal account of this area of London which we know reasonably although not well.

When we lived in London we were very close to Brick Lane and the gentrification of that area and Spitalfields has been extraordinary in the last few years. It is so intriguing to learn through you of its origins and its place as an avant garde stronghold.

Mark Gertler is an interesting artist. We watched the film Carrington recently but are uncertain how accurate the picture of him portrayed in the film was reflected in real life.

Yes - impoverished and desperately short of space, but with a strong sense of community and very very safe. So it was a nightmare when the Fascists chose, out of the entire UK, the East End for the 1936 battle.

I didn't know the name Shadwell until I was trying to pin down a suburb for Cable St.

But you are right.. people were very good to the new citizens. Partially for pragmatic reasons (eg because their labour was essential for the economy) and partially because there was a real commitment to provide a safe haven in Britain. I like your grandfather!

I have come back to the East End in this blog a number of times. It is fascinating historically, because of the different populations that arrived, the evolving architecture, the diverse religious institutions, specialist arts and crafts, and the markets. My final art history thesis was about the Huguenot silver artists after they were expelled from France :)

But you are the first family I know who moved back into a gentrified East End. What a great decision.

Hello Hels, It seems that London's East End is similar in some ways to the immigration in New York City. I have come across a number of accounts of living in the New York tenements, often from those who started there and did well. Musicians like Irving Berlin and comedians like Alan King come to mind.

By the way, how do you think the matzo balls were in that Jewish Soup Kitchen?
--Jim

that seems to be true for every newly arrived refugee group, running away from persecution or grinding poverty at home. They are so grateful to be offered safe haven, they will live in any circumstances... at least for the first generation: cramped East End houses, divided into rooms; New York tenements, Nissan huts in Australia or ma'abarot camps in Israel.

Re soup, imagine the debates between the Northern Russians, Poles and Ukrainians :)

Helen this is your father speaking. The family's surname was changed when they arrived in London. I think their old surname sounded too Eastern European. My mother said they took on the surname of a famous politician in the British Parliament, even though he was no relation whatsoever.

I have heard many times of surnames being changed as families pass through Immigration officials, either on purpose or because the officials didn't hear properly. But I have never heard of families adopting a famous politician's surname. Cool!

What a fascinating post. This makes me want to get a better idea of my own family history. I knows the bare facts but not how they lived.

nod... I also had only the vaguest of information, absorbed from my grandmother's stories.

The original census data provide a goldmine of reliable history. But be prepared... some of it is heart-breaking eg of the 14 full term pregnancies, many died in childhood.