The city of Nice in southern France has long attracted holiday makers from the north. The construction of the Promenade des Anglais in 1820 suggests that the town council was actively targeting British tourists who, if they had enough money, would certainly want to avoid the cold winter at home. But Nice's lovely beach and attractive weather did not seem to be enough.

In the 1870s Nice’s Council decided to examine Brighton Palace and London’s Crystal Palace, to create a pier and casino that would be appealing in Belle Epoque France. It was to have a casino, cafes, restaurants, shops, theatre and a great space for promenading. The location was perfect - Place Masséna where Nice is closest to the sand and water. And so was the timing – compare this plan with the Victoria Pier in South Blackpool that opened at the same time.


A suspicious fire broke out just days before the Nice pier was due to be opened to the public in April 1883. But finally, years after the project was first mooted, the casino (opened 1884) and pier (opened 1891) were finished. Every thing was topnotch for the complex facing Place Massena: the music, operettas, vaude­ville and orchestras, all a huge success with visitors. The casino was even extended to the rear with a hall containing a much loved winter gard­en, totally covered in a huge glass roof. 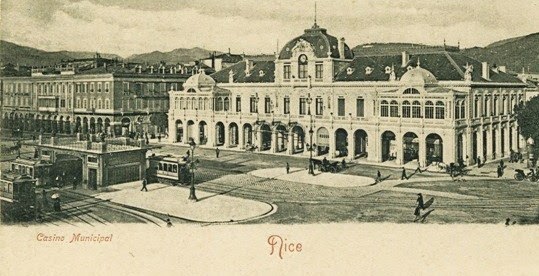 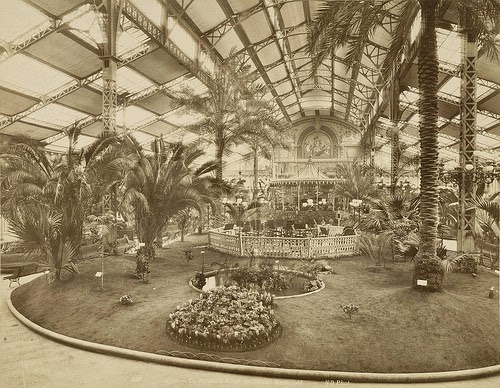 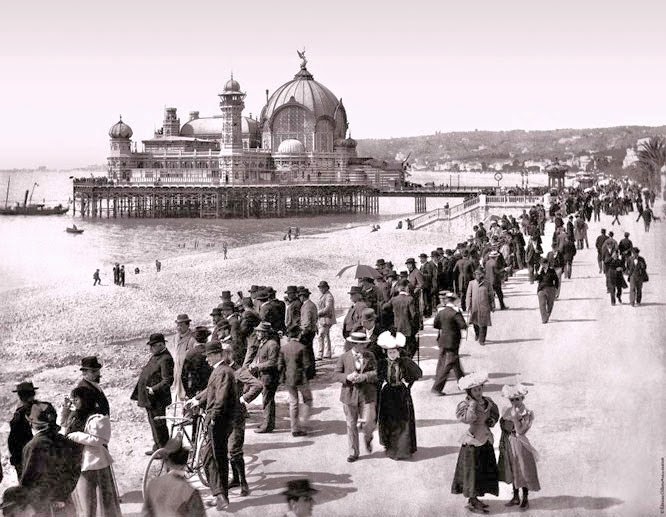 The pier was described as being an immense structure with a bold dome, covering a bandstand, concert hall, theatre and sea bathing. The rooms were apparently decorated in exotic Orientalist styles – Japanese, Indian, Turkish and Moorish. The night lights on the pier looked as if the structure was hovering magically over the sea.

Very sensibly, the casino complex held memorable banquets in honour of Emile Loubet (president of France 1899–1906) and Armand Fallières (president 1906-1913). It must have worked because in 1906, the money rolled in; the Casino’s lounges and the theatre were redecorated by the architect Édouard-Jean Niermans. Further changes were made to the exterior in 1939. It stripped of its grey roof and the façade was painted pink to bring it into harmony with the other, older buildings in Place Masséna.

Today beautiful Nice has utterly changed. The pier was closed in 1942 and stripped of its valuable metals by the occupying German forces. The newly re-instated French government doomed the pier in 1946.

After WW2’s liberation of Nice, General de Gaulle spoke in 1945 to the Nice population from the balcony of the Casino. But the conn­ect­ion to de Gaulle did not save the complex. In 1964 the Casino hall and the theatre were closed, soon followed by the gaming rooms in October 1969. The building was razed to the ground in June 1979, on the orders of the mayor Jacques Médecin. This centre of cultural life on the Riviera during the Belle Epoque had closed, never to re-open. 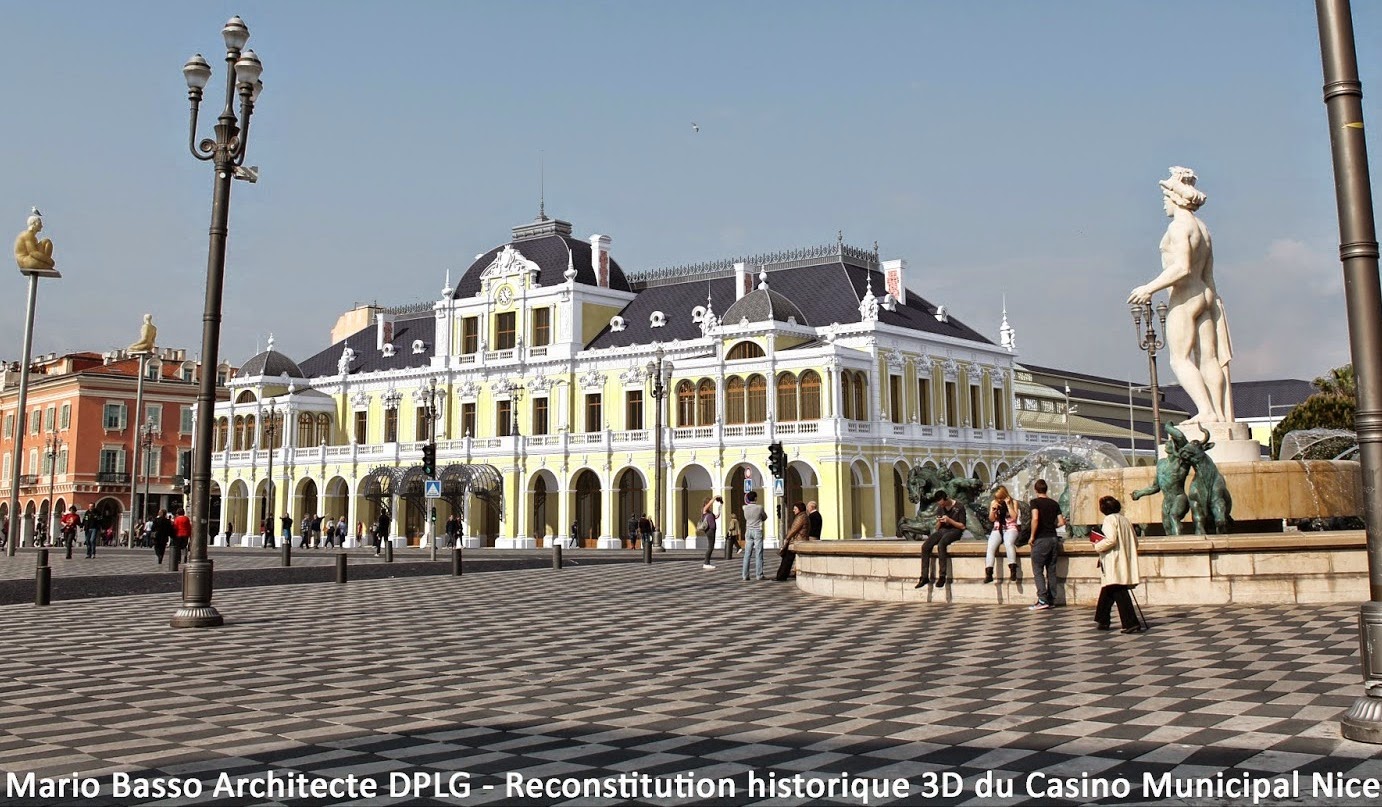 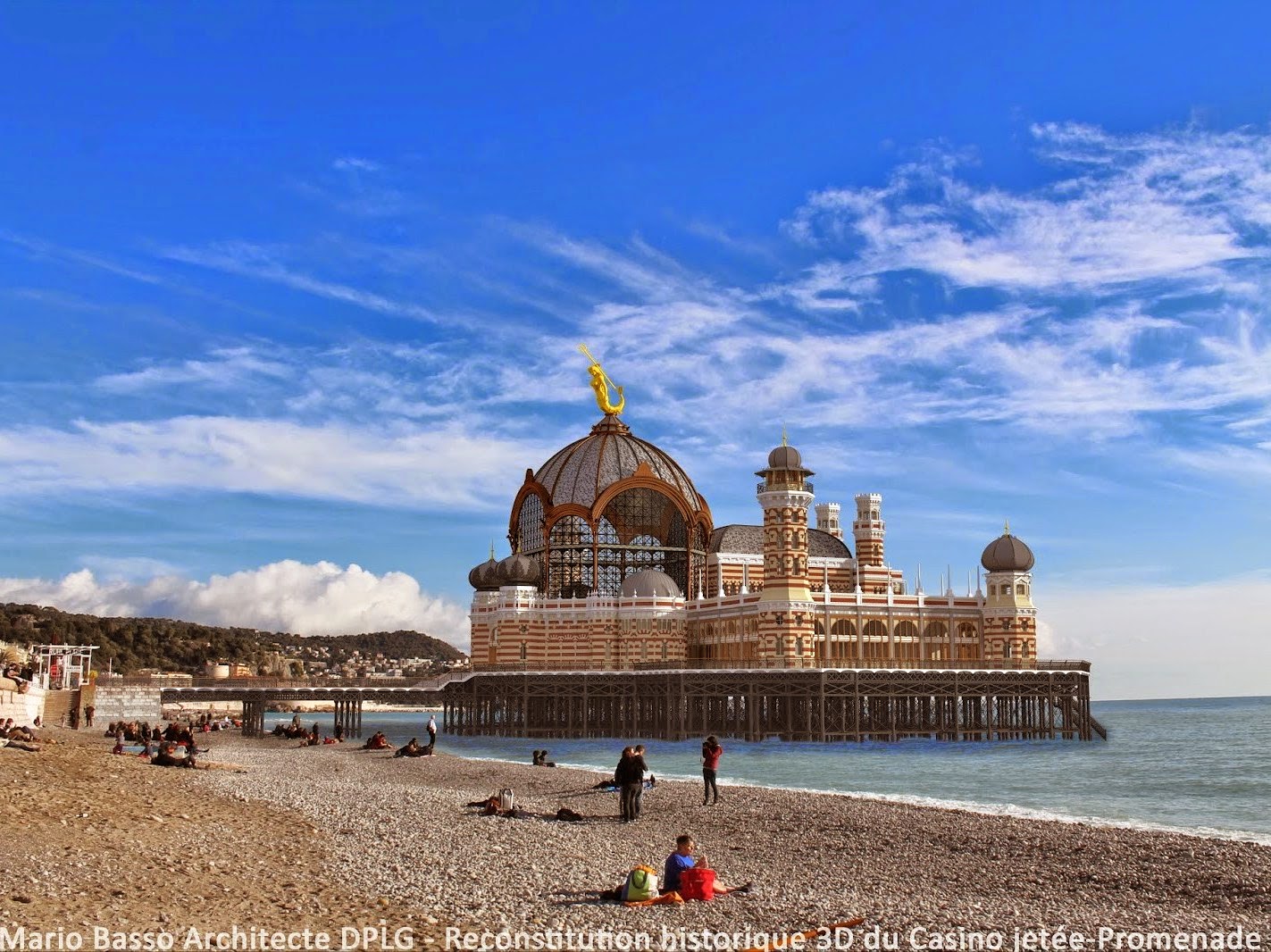 The Good Life France reminds us of the tragic loss. We would not know the Palais de la Jetée in Nice had even existed, if it were not for three things: 1] old postcards, 2] the Pier Palace chandelier that now hangs in the Church of St Roche and 3] the paintings of Raoul Dufy.

I recently saw twelve albumen print photos of Nice sold as a souvenir of the Exposition de Nice in 1884. Beautifully presented, but the photos did not provide much information on which to base a complete architectural 3 D design via modelling and rendering. And there were no plans of the buildings in the Nice Council archives. Now viewers can inspect the architect Mario Basso’s cleverly reconstructed images of the casino and the pier in The Griotte. Many thanks, Mario.

This makes for very interesting and rather sad reading. What wanton destruction.

No casino, no leisure pier and no theatre. So what are the key tourist attractions in this part of Nice now?

Hello Hels, I have seen books with colored overlays that recreate the appearance of ancient cities. Too bad that this technique must now be used with such appealing buildings as these, that were only lost within living memory, due to whims of fashion and other short-sightedness.
--Jim

I remember how sad it was when the StKilda Pier Restaurant burned down 10 years ago, by accident. Plain and a bit ugly but families loved it since Federation.

Nice is the fifth biggest city in France and second only to Paris in tourist numbers. If there needed to be post-war destruction of the old cityscape, it should not have been in Place Masséna, the main square of the city.

perhaps tourists don't go to operettas, vaude­ville, winter gardens and pleasure piers any more. The Promenade des Anglais, once famous for its opulent palaces and villas, is now full of post-war blocks of flats and gorgeous hotels.

There are still lots of tourist attractions in Nice.. just not in the same location. See http://www.amb-cotedazur.com/French-Riviera/nice.html

in this case it was even worse because there did not seem to be any original architects' plans extant. Nor were there proper internal photos, documenting the facilities for future generations.

The St Kilda Pavilion was built in 1904 as a kiosk located at the end of a longggggg walk along St Kilda Pier. Melbourne may not be Nice, but the loss (by arson?) was awful. Happily the kiosk re-opened in 2006.

I always deplore the wanton destruction of lovely old things, whether by Bolsheviks, NAZIs or idiot Victorian councils.
Nice does still have the opulent Hotel Negresco. Opulent enough for Helmuut Newton to use for his photos anyhow. King Farouk was a habitue in the 50's, king of pl;ayboys as well as Egypt. Nice is also on the way to Monte Carlo, and many art museums.
More adventurous tourists could simply observe the criminal activity around Le Gare du Nice. :)

Ann
agreed...Nice still has some amazing places and Hotel Negresco (1912) is a perfect example. I particularly like the Promenade des Anglais location.

One of my favourite attractions in the centre of town is The Palais Massena - fancy 19th century architecture and impressive impressionist paintings.