Orchestra of Exiles 1936 - getting Jewish musicians out of Germany

“Orchestra of Exiles” is a fine film that premiered in Dec 2011, directed by Josh Aronson.

Bronislaw Huberman (1882–1947) had been a child violinist in Poland who was exploited and pushed by his father, yet was enthusiastically cheered by Brahms. Pulled out of school, the young lad played in Austria, Germany, Russia, Poland and the USA. The sky was the limit for his career.

But Huberman was Jewish. By 1933 he understood that the Nazis would be gunning for every Jew in Germany and then in other countries. This was true, regardless of how elevated the cultural level of Jewish communities was; regardless of how badly the great orchestras would suffer if 40-50% of their players were sacked.

Wilhelm Furtwängler (1886–1954) was the German conductor and composer who was given the responsibility of leading the Berlin orchestra, and he was Huberman's friend The question was raised in the film about why Furtwängler remained in Nazi Germany, even though he was not a member of the Nazi party. And how did he react to the many Jewish members of his orchestra, from 1933 on? 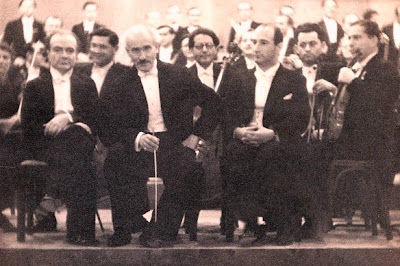 From L to R: Bronislaw Huberman
Arturo Toscanini who conducted the concerts
William Steinberg who trained the orchestra till Toscanini arrived

In 1934 Huberman and his wife returned to Palestine where he con­ceived of the idea of moving Europe’s most brilliant Jewish musicians to a safe haven. He decided to tour across Central/Eastern Europe, to interview any musician who wanted to play in his to-be-established Palestine Symphony; if a person was selected, Huberman guaranteed to get him and his family a visa out of Europe. Of course it had to be Palestine because France, USA, Canada, Australia, Britain, Argentina and other countries had made immigration extremely difficult in the years before the war started.

At the same time Huberman was trying to get musicians OUT of Europe, the Jüdische Kulturbund-Jewish Cultural Federation under Kurt Singer was providing an alternative workplace WITHIN Germany, for those Jewish artists, musicians and actors already fired from German institutions. The Jüdische Kulturbund’s 70,000 members actually lived quite well, at least until 1941. Then they did not.

At least the Kulturbund’s conductor, Hans Wilhelm Steinberg, who fled to Moscow and then Tel Aviv, survived the war. Steinberg had been invited to conduct and train the newly established Palestine Symphony Orchestra!

Perhaps the most anxiety-provoking parts of the film were the Arab riots of 1936 and the British decision to block Jewish refugees from arriving by ship to Haifa. Only through the intervention of Chaim Weitzmann in Britain (Israel’s future head of state) and Albert Einstein in the USA could enough visas be obtained and enough money raised. It seems that Einstein had been a talented violinist himself in his youth and greatly admired Huberman's music.

Eventually the Palestine Symphony did start its concert tours in Dec 1936, a few months later than intended but still led by the greatest composer in Europe, Arturo Toscanini (1867–1957). Golda Meir, David Ben Gurion & every other cultural or communal figure in Palestine was at the first concert, which was held in the Italian Pavilion of the Levant Fair Ground in Tel Aviv. 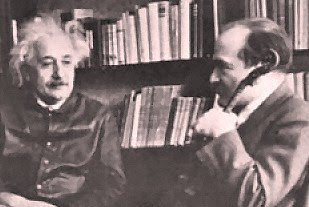 In the film, I particularly loved the contemporary letters, photos & music; fortunately there were plenty of documents to and from Huberman, located in various central European countries. I was less enthus­ed about re-enactments. But on balance, the important issue for me was that Orchestra of Exiles showed a man who persisted and saved 73 brilliant musicians and their spouses and children. And he salvaged the Jewish cultural tradition of European music, right under the eyes of the Nazis.

A lot of the initial data for the film came from the daughter of Viennese violinist David Grunschlag who was one of the few world class musicians to survive the Holocaust. Huberman got the Grunschlag family tickets to Palestine, to play in the orchestra of exiles that Huberman and Toscanini were creating. That the director of this film, Josh Aronson, is himself a classical musician and Jew of European origin.. could only have helped in making a sensitive recreation of this era.

The film opened in December 2011, exactly the 75th anniversary of the founding of the orchestra.

Hello Hels, What a harrowing story this is of the way the Nazis treated these performers. One would have thought that the murder of many artists of international repute would have spurred strong international support and intervention, but such apparently was not the case.

When I collected early phonograph records, I was often dismayed to learn when researching the performers how many of the German ones ended up in the Nazi death camps. The great Ottilie Metzger (many recordings also on Youtube) is one name that springs to mind.

The other side of the coin concerns artists and performers accused of cooperating with the Nazis, the list including P.G. Wodehouse and Maurice Chevalier. Some of these were coerced, but some willingly cooperated, or were straddling the political fence, and for me at least this strongly affects my respect for and enjoyment of their work.
--Road to Parnassus

I think you will find with Maurice Chevalier, the key word is "accused" - he was never found guilty of being a collaborator. Not that I am a fan.

Wodehouse was probably more naive and foolish than a Nazi collaborator. His decision to make cheery broadcasts from Berlin (to get out of a German internment camp) was wrong, but on the other hand, his works contain plenty of ridicule of fascism with Spode and the Blackshorts.

True true. Ottilie Metzger really did get out of Germany and was in Brussels in 1939. Her sometime singing partner Erhard Eduard Wechselmann really did get to Amsterdam. Yet they both perished in the Nazi camps.

According to the film, there were two more murders that _could_ have been prevented. Of the 73 musicians saved by the the newly established Palestine Symphony Orchestra, 2 went back to Germany to be with their parents in the late 1930s. I love my parents dearly, but even so I would not have gone back to Nazi Germany from a safe haven in 1939.

the film didn't mention either P.G. Wodehouse or Maurice Chevalier, but I will be very interested to follow up on your lead and parnassus'.

Arturo Toscanini was a very brave person. I wonder if his career suffered because of his stance.

Very brave! How ironic that it was Arturo Toscanini who became the first non-German to conduct at Bayreuth, in 1930. Toscanini was an artist already well known for his anti-fascist views, so he was one of the very few musicians to stop performing in Germany because he found Nazi policies morally repugnant. Nonetheless I can’t help but think he was the bravest musician in the world when he boldly went to Palestine, thumbing his nose at the Nazi party.

Fortunately he always had an alternative, if European music fell apart – the NBC Symphony Orchestra in the USA