The colonising exploits of Edward Gibbon Wakefield (1796-1862) were not part of Australian history curricula for primary school students. But recently a favourite blog, The Resident Judge of Port Phillip, reviewed two books on the subject. And I soon read another blog, Keith Johnson Wellington New Zealand, on the Wakefields.

And three quite unrelated events occ­urred to arouse a special inter­est in the said Mr Wakefield. Firstly a New Zealand commentator noted that NZ students heard endless stories from primary school history classes where Wakefield was the founder of their nation. Secondly I was already fascinated by the development and collapse of a different Utopian dream. Thirdly a Canadian involvement came to light, and I love Canadian history.

Wakefield did not come into adulthood with clean hands. Seeking a de­cent income to secure a seat in the House of Com­mons in 1816, Wake­field abducted a VERY young daughter of a Cheshire silk manufact­ur­er, and married her. Worse still, he had two children, but dumped the babies onto a relative when his wife died in childbirth. He later tried to marry another child bride and this time the girl’s father ensured that Wakefield was tried in court. In May 1827, Edward was sentenced to three years gaol.

In 1831 Wakefield became involved in projects that advanced the colonisation of South Australia. He believed that many of Britain's soc­ial problems were caused by over crowding, and he prom­oted the concept of emigration to the colonies as a solution. Wake­field’s colonisation scheme was not based on involuntary convict labour as New South Wales had had – rather he was promoting a vol­un­tary labour force of workers, artisans and capital, working in unison.

The South Australia colony started slowly. Alth­ough Wakefield had created the original dream, he found he was being pushed out of the decision-making. Why was this so - a lack of interpersonal skills on Wake­field’s behalf? A utopian dream not shared with the other commissioners? Religious conflicts? Event­ually, when the conflict was intolerable, Wakefield took his bat and went home.

As quickly as possible, in 1838, some of the colonisation commis­sion­ers approached Dr Gregory of the Royal Military College to recommend a different, more godly man as governor of South Australia, and Gregory advised Geor­ge Gawler to apply. The task was to concretise the experiment in system­atic, self-supporting colonisation, devised by our very own Edward Gibbon Wakefield. 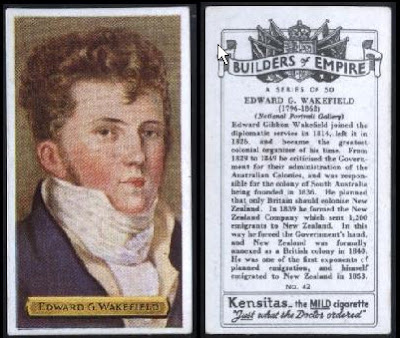 Wakefield was still very interested in colonisation as a way to resolve Britain’s overcrowding, of course, so he set his sights on a new dream - the New Zealand Association. In 1837 Britain’s Colonial Office gave the New Zealand Association a chart­er to promote settlement in New Zealand. It has been suggested that the government wanted New Zealand to become a full British Colony, in which case land sales would become a Government monopoly. Wakefield, on the other hand, wanted the NZ Association to be a commercial company. In the event, the Colonial Office and the NZ Association fail­ed to come to an agreement, so Wake­field turned his fertile mind towards Canada instead.

The British government of Lord Melbourne wanted to send Lord Durham to deal with the rebellion in Lower Canada that broke out in 1837. Lord Durham was very aware of Wakefield's colonial theories from the NZ Association and was only prepared to sail to Canada if Wakefield could also sail, as Commissioner of Crown Lands. Alas Wakefield’s reputation must have preceded him. Wakefield and his son, also Edward, sailed secretly for Canada in 1838. But before they arriv­ed, the appointment was blocked back in Britain. Lord Durham got around the prohibition by appointing Wakefield to a different position.

The union of Upper and Lower Canada in 1840 was no mean achievement, especially since Durham’s adviser Edward Wakefield had proved what a skilful diplomat he could be, when required. Yet Durham suddenly resigned; he and Wakefield returned to Brit­ain together. What happened?

Back at home, Durham presented to Parliament a report on his years in Canada (1837-9); this report became the basis for British Colonial policy.

By 1839, Wakefield was invited to become the director of the newly formed New Zealand Company. This time around he was smarter; he stacked the board with his relatives. Their first ship sailed for NZ in mid 1839 and within six months he had sent eight more ships. This was a brave (or foolhardy) experiment, since the NZ colony was an uncertain entity. More and more Wakefield siblings were thrown into the project.

While active with the New Zealand Co, Wakefield still watched Canadian affairs. The North American Colonial Association of Ireland sent him back to Canada as their very well paid representative in Jan 1842 and he stayed in Canada for another year. During that short period, he had got himself elected to the Canadian Parliament. Yet again, he pulled up his wickets and sailed for home. What happened??

By 1846 Wakefield was focusing entirely on NZ, but I don’t think the 50 year old was a well man. In May 1847 the British Government agreed to take over the debts of the New Zealand Company and to buy out their interests in the Colony. The directors accepted the offer! 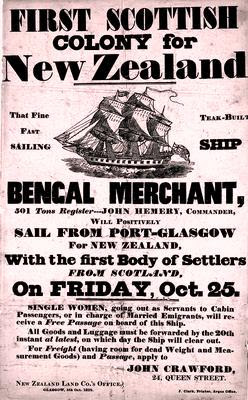 Poster advertising for emigrants to New Zealand in 1839

Meanwhile Wakefield was getting involved in a new scheme that had a more religious emphasis. He was working with John Godley to promote a new settlement in New Zealand, this one to be sponsored by the Anglican Church. This plan matured to become the Canterbury Settlement. The first ship sailed from England in Dec 1849 with Rob­ert Godley in command of the expedition. With them also sailed son Edward Wakefield II. Then the first immigrant ships sailed from Plymouth in September 1850, bound for Canterbury and others followed. In the same year, 1850, Wakefield co-founded the Colonial Reform Society with another member of parliament.

During 1851 and 1852 Wakefield continued to work for the Canterbury Association and also to work towards making New Zealand a self governing colony. The New Zealand Constitution Act was passed in June 1852. New Zealanders liked the idea, of course, although they did not like that their new government had to absorb the remaining debts of the defunct New Zealand Co.

At last Wakefield personally sailed from Plymouth in Sept 1852 for New Zealand. Within a very short time Wakefield was completely disenchanted with Canterbury. He claimed the citizens were far too parochial in their outlook; they were far more concerned with domestic issues rather than national politics. Clearly they were not worthy of Edward Gibbon Wakefield so he soon sailed for Wellington.

But Wellington was a disaster - Wakefield went on the attack almost as soon as he landed. He took issue with Governor George Grey on his policy on land sales. Grey, who thought Wakefield was a speculator and hustler, was in favour of selling land very cheaply to encourage the flow of settlers. Wakefield, who thought of himself as an ideologue, wanted to keep the price of land high so that the growth of the colony could be financed by land sales. This had been a core principle of his colonial theory since 1831.

Governor Grey did not quietly give in to Wakefield’s beliefs; Grey drew attention to the generous fees that had been paid to Wakefield as a Director of the New Zealand Company at a time when the company was reneging on its debts in New Zealand. It was an ugly struggle.

After decades of political battles, Wakefield withdrew from all public life. This very difficult man died in Wellington in 1862, still annoyed at all his plans that had been frustrated by other, more powerful people. How­ever he was very pleased to see that the Wellington settlement was successful. 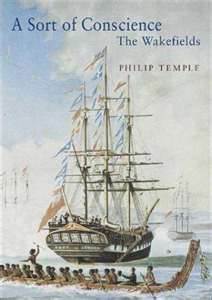 Read:
Real Gold, Treasures of Auckland Libraries and
Philip Temple, A Sort of Conscience: The Wakefields, Auckland UP, 2002.

What a fascinating bloke. I have noted in different histories how often Britain vetoed an appointment in one of their colonies, but by a round-about way the person was appointed to a position anyway. Slow communication can be very helpful at times.

many of Wakefield's ideas were excellent, even as far back as 1831. He did NOT want colonisation to be based on involuntary convict labour as New South Wales endured (or profited from). Most moderns would be very attracted by his notion of a well balanced, voluntary, cohesive labour force of workers, artisans and capital.

I had put his lack of official advancement down to his tricky personality. But on reflection, you might be right. Parliament and the civil servants in Britain wanted their own men to be appointed to important positions in the colonies.

If I was 19th century civil servant in the position of being able to block or advance someone's career, I think I would have the known heiress abductor at the bottom of the list of possible candidates, and I would make sure he stayed there. It might have been moral scruples on the part of the civil servants. However, I haven't read the book and don't know how widely known this was. But there'd have been talk, I'll bet.

It seems that frontier settlements attract this kind of strong and individual personality--think how boring history would be otherwise.

The name of Wakefield is also well known in America. There is the city of Wakefield Massachusetts, which possesses many historic houses.

Ruth Wakefield ties in with your recent post about tea rooms. She ran the Toll House Inn from an old Colonial tavern. The Toll House Cookbook was a standard for generations, but her chief claim to fame is that she was the inventor of the chocolate chip cookie, which are still often called Toll House cookies in the U.S.
--Road to Parnassus

I BET there was talk, yes :) But did this early indiscretion blight the rest of his career?

Even convicts were given positions of great responsibility, if the colonies needed them eg Francis Greenway architect and Doctor William Bland who had both been convicts in Sydney.

Mind you, I must admit that both Francis Greenway architect and Dr William Bland felt under appreciated by the colonial authorities as well.

Were your Wakefields from the same family as the Wakefields who were so involved in pioneering British colonies, especially New Zealand? What an amazing event that would be.

The final pictures are of Shrigley Hall, Cheshire (now a hotel) – the house owned by William Turner, the father of Wakefield’s underage runaway heiress Ellen. This is what he missed out on to become the ‘Father of New Zealand’!

All the best
Keith
http://kjohnsonnz.blogspot.com.au/2010/07/edward-gibbon-wakefield-new-zealands.html

thank you. Shrigley Hall Cheshire and its estate looked lovely. And just what Wakefield needed.

Since Ellen Turner was also going to inherit daddy's spinning mills, I think Wakefield should have cosied up to daddy, not alienated him. Especially since Turner was a High Sheriff of Cheshire!!!

Wow, this is just so interesting! I had a fair idea about Australia's history but absolutely none at all about New Zealand and Canada and the connection between them. You've actually inspired me to try read up more on the subject now!

there are two great joys in blogging: a] finding new stories that are fascinating, stories that cause you to search further and b] finding unexpected links.

That Lord Durham was very aware of Wakefield's colonial theories from the NZ Association was in some way to be expected. After all, Lord Durham would certainly have read whatever reports were going around London.

That he was only prepared to sail to Canada only if Wakefield could also sail, as Commissioner of Crown Lands, came as a big surprise.