Canada’s Golgotha sculpture: why was it hidden away?

In England in 1887 British artist Francis Derwent Wood entered art school and worked as a modeller. In 1890 he joined the National Art Training School where he studied under Edouard Lanteri, the man who also taught Charles Sargeant Jagger. Quite independently of this particular post, I have written several times about Jagger in the past: Low Reliefs and War and Sex.

From 1918 on, Wood was professor of sculpture at the Royal College of Art and one of his commissions was to model the wreaths for Sir Edwin Lutyens' Centotaph.  Lord Beaverbrook decided to document Canada's huge contribution to WW1 by commissioning 116 English and Canadian artists to produce 800 art objects. One of 116 artists was Francis Dervent Wood.

This post is going to concentrate on Canada's Golgotha, a half life-size bronze sculpture by Wood that depicted a crucified WW1 soldier. It illustrated the story of an unknown man from the Battle of Ypres in April 1915. We know only that he was a Canadian (from the maple leaf insignias) and that he was surrounded by jeering Germans as he died on the makeshift cross. You can see the tatty barn door in the background. Appropriately for a war casualty, this young man had baynets in each wrist and ankle, not nails. And he was in heavy army clothing: a great coat and boots, rather than a mere loin cloth.

The sculpture was first displayed in an exhibition for the Canadian War Memorials Fund 1919, at Burlington House in London. But the sculpture was withdrawn from the exhibit after protest. The Allies were disgusted at German barbarity and they were particularly horrified that a Christian symbol be used to kill a young Canadian soldier. The Germans, on the other hand, were outraged that an atrocity story could be publicised without any evidence of it having been historically accurate. They assumed it was more Allied propaganda.

But why was the sculpture, controversial though it might have been in 1919, hidden away for the rest of the century? Whose interests were being served?
* 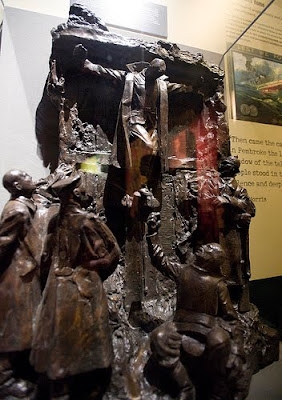 After the end of the war, the Germans formally requested the Canadian government provide proof of a crucifixion. But there were two insurmountable problems: the written eyewitness accounts were unclear and contradictory, and no crucified body was ever found.

BEST FREE DOCUMENTARIES described new historical evidence which identified the crucified soldier as Sergeant Harry Band. He was from the Central Ontario Regiment of the Canadian Infantry. Based on letters from other soldiers in Band’s unit to Band's sister Elizabeth Petrie, and her letters back, the family in Canada eventually discovered that the horror stories about a crucified Canadian soldier were true. Like other soldiers without a proper grave, Band was commemorated only on the Menin Gate memorial.

It is interesting to me that when the sculpture was displayed in 2000 at the Canadian Museum of Civilisation, it again provoked controversy. People are still very angry about German atrocities, assuming that crucifixion of the old Canadia soldier was the most barbaric of all atrocities. I, a non-Christian, personally think the massacre of thousands of French and Canadian soldiers in Belgium by poisonous gas to be far more barbaric. But I might be missing the critical symbolism here. In any case, note the name of the 2000 exhibition: "Under the Sign of the Cross: Creative Expressions of Christianity in Canada".

In 1921 the entire War Memorials Collection was donated to the National Gallery in Ottawa, but the Gallery was not in a hurry to display any of these precious art objects. Particularly Canada's Golgotha.

Now at least the sculpture is in its rightful home, the Beaverbrook Collection of War Art in the Canadian War Museum in Ottawa. Perhaps the 1984 book Art in The Service of War: Canada, Art and The Great War by Maria Tippett will provide some answers.
Posted by Hels at 21.4.10

I'd heard of this. A fascinating story and I think you have presented it very well - though personally I have great doubts the actual incident is true.

What gets me is why is this not just regarded as symbolism in the first place - why does it have to be proven? It's a methaphor. Like Hermes - I have doubts to whether this is true or not.

But I'm guessing it was hidden away because people just don't like to see their Jesus-symbols portrayed differently. To this day there is all sorts of hue and cry in the West if the crucifixion is portrayed in an editorial cartoon for example.

I saw the BBC analysis and think that something did happen back in Ypres. The details were murky then and will probably remain murky forever.

Did Lord Beaverbrooke pay for all the art works or did the Canadian tax payer. That would make a difference about who could hide an art object for 80 years.

There is a ton of writing about Beaverbrooke. During World War I the Canadian government made Max Aitken (later Lord Beaverbrooke) responsible for creating the Canadian War Records Office in London. He became chairmanship of the War Office Committee for Propaganda - his specific task was to document and publicise Canada's contribution to the war, in British newspapers and back at home. He certainly visited the Canadian troops in the battle fields often enough.

During the war, he wrote a history of the achievements of Canadian soldiers and after the War, he wrote several more books. For our purposes, Aitken’s most important role was establishing the Canadian War Memorials Fund and collection the art. But who paid for the 800 art objects? I still don’t know.

Whether the story was true or not, it does seem to me to be a fine example of art in the service of rather crude propaganda. We have been watching a series about world war two propaganda on our national public television service. It has become clear to the younger members of my family that all news and most of our culture is, in fact, propaganda, that propaganda is good if you are on the same side as the propagandists and that the show itself was the propanganda of our contemporary accepted beliefs.

I think that this act is regarded as more barbaric because it strikes at the very heart of Christianity and it was seen as martyrdom.

I am prepared to believe that this incident was true. It really had to be proven because it's so upsetting and there were so many false accusations against the Germans in WW1.

Shalom Hels. It is good to learn of your grandfather's wartime experience in our region (in your comment to Sally). I'd love to hear more.
You might like to see my ANZAC Day in Jerusalem post of yesterday and the one which will come soon.

I cannot seem to forget this sculpture; its history still haunts me. I understand what everyone said in response to this post: that the story might not have been true, and even if it was, nobody wants their religious symbols used differently.

But Iain Overton's PhD thesis was very persuasive. So the truth or otherwise of the 1915 events in Ypres seem almost irrelevant to art works today. Even in the 1980s Maria Tippett wasn't allowed to see the sculpture for her book called: Art in The Service of War: Canada, Art and The Great War!