Charles Jagger 1885-1934 was born in Yorkshire and studied art in Sheffield before moving to London to study sculpture at the Royal College of Art for some years. He was just starting to develop his career when World War One broke out in 1914. So Jagger joined a regiment that was made up of performing and visual artists. The following year he was commissioned and quickly served in horrendous battle fronts. Jagger survived, but was damaged physically and probably psychologically.

The first work that Jagger did, after returning to civilian life, was a series of war memorials. I am not sure if that was a good idea (because only a soldier would understand the true meaning of war memorials) or a bad idea (because he'd be forced to relive the tragedies he saw in the trenches). However some of his works from this period went on to be treasured by bereaved parents and communities in post-Armistice Britain. First Battle of Ypres at Horse Guards Parade was completed in 1918 and Royal Artillery Memorial at Hyde Park Corner was completed in c1923.

Jagger’s Artillery Memorial in the blog Great War Fiction showed the enormous impact he had on British memorial sculpture after WW1. This giant stone howitzer was covered in low reliefs, capturing the night­mare of war. The soldiers on the memorial were so realistic, they could have been the neighbour’s boy or the lad who delivered news­papers. Jagger’s dead soldier was particularly realistic and particularly harrowing.

And there is even a Jagger connection to Melbourne, as the blog Airminded · London noted. The Drivers and Wipers statue, located in Melbourne’s Shrine of Remembrance reserve, commemorated the many thousands of Australian lives lost during the fighting at Ypres. The bronze sold­iers were recast by Jagger from the London figures, and shipped to Australia for a location outside the Museum of Victoria. 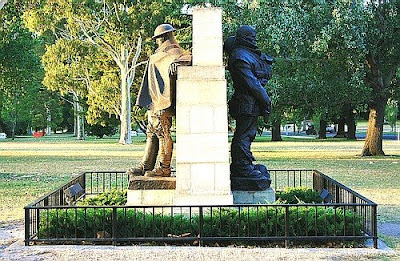 
By 1930, Jagger was accepting commissions for works not related to war and loss. And perhaps the mood of the nation had changed to some­thing altogether more Deco and frivolous. But I don’t think anyone expected an object as racy as Scandal Relief 1930, now in V&A South Kensing­ton.

Jagger created Scandal Relief for Mulberry House Westminster, home of Henry, 2nd Baron Melchett, and his wife Gwen Mond. In the drawing-room of the Mond home, in the centre of the end wall, was a large marble fireplace. Over the fireplace, there was a panel left specifically (161 x 149 cm) by the architect Darcy Brad­dell, to be filled by Jag­g­er’s fine bronze relief.

I have no doubt it was meant to scandalise polite society and sat­irise their hypoc­risy, but how would polite society have got itself into the Mond drawing room? Therefore we have to assume that the Monds were having a great laugh about the gossip that had surrounded them, laughing at their own expense and laughing at “decent people”. 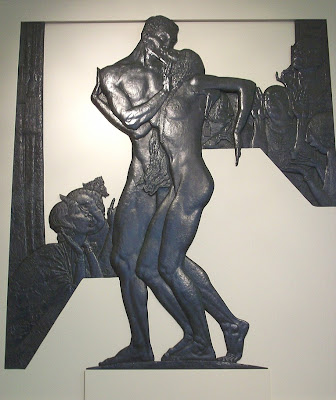 
It may seem bizarre that Jagger was best known for his ultra-sombre, ultra-respectful war memorials. Perhaps he would have moved on to more decorative works in the 1930s, had he lived long enough, and may have pushed his oeuvre in new directions. We’ll never know; he died in 1934. Undoubtedly Jagger’s racy work will now bring people to the museum – Scandal Relief was bought this year, specifically for the V & A and funded by National Heritage and another fund.

Interesting article. You wonder sometimes whether the First World War interupted artists careers, added to their experience, pushed them in new directions, or destroyed them. Probably a combination of all four.

I do love the relief, they sounded like an entertaining couple you'd like to spend time with, not necessarily in a menage though!

For another look at Jagger in the UK, read the blog Exploring London:
http://exploring-london.com/2014/09/10/10-of-londons-world-war-i-memorials-5-royal-artillery-memorial/