In 1917, The Fine Arts Society in London exhibited a series of works called The Great War: Britain’s Efforts and Ideals. Commissioned by the Bureau of Information, the exhibition used 9 headings: Making Soldiers, Making Sailors, Making Guns, Building Ships, Building Aircraft, Transport by Sea, Women’s Work, Work on the Land and Tending the Wounded. 12 artists made prints for the ‘Ideals’ and nine artists depicted the ‘Efforts’. 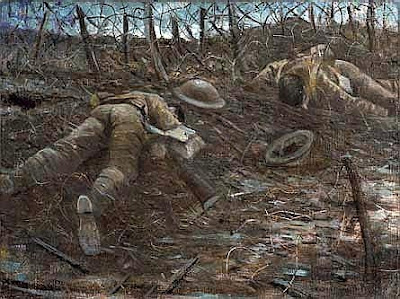 Christopher Nevinson (1889–1946), one of the important artists in the exhibition, studied alongside Paul Nash, Ben Nicolson and Stanley Spencer and became Britain’s foremost Futurist. But it is his pictures of the Great War, based on his experiences on the Western Front as an ambulance driver in the Army Medical Corps that Mike McKiernan focused on. Nevinson was the first artist to depict realistically what was happening at the Western Front and although not a confirmed pacifist, his antiwar sentiments led him to emphasise the appalling human cost of war. Paths of Glory, now in the Imperial War Museum, was censored during WW1.

This 1917 show did not include George Lambert,  Charles Jagger or Will Longstaff, so I have included them in previous posts.

Recently (2009) The Fine Arts Society in London once again held an exhibition called War. They wrote that wars were the catalyst for the best artists of their generation to produce some of their most modern, powerful and beautiful work, even more importantly because photographic images of the reality of war had been repressed. The show included two of the most stark and memorable works on paper of WW1, Returning to the Trenches by CRW Nevinson and The Void of War by Paul Nash. There is also a group of three horror-filled paintings by Nash done in the trenches in 1917, in which he vividly recorded a landscape transformed by high explosive. 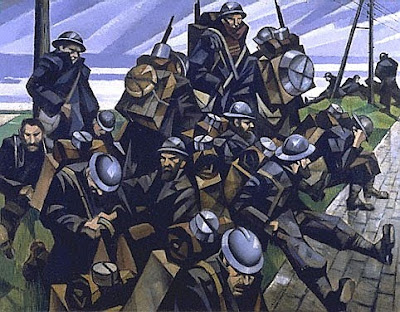 Many of the artists (Charles Sargeant Jagger, Paul Nash, CRW Nevinson, William Roberts, Edward Wadsworth) were on the battle fields themselves during WW1. This first-hand experience gave their work immediacy and brutal honesty. It took a message from the trenches to the firesides back at home. Nevinson's 1916 drypoints were his first prints of war subjects. He served with the Red Cross as an ambulance driver, stretcher-bearer and interpreter, and was faced with the wounded, many of whom died through lack of medical attention, in scenes of unspeakable horror.

Jagger’s The Driver, part of the Royal Artillery Memorial at Hyde Park Corner, is one of his greatest and most moving sculptures. Consider it alongside Wipers, a bronze of a rifleman standing with bayonet fixed. The large watercolour Gunners Pulling Cannons at Ypres by William Roberts and Edward Wadsworth’s woodcut Drydocked for Scaling and Painting were equally powerful.

The Fine Art Society put up a number of the paintings on their web page. So did Weimar with an excellent range of Allied and German WW1 paintings.

I have seen The Void of War by Nash... very disturbed, very dark. But then it would be dark, since he had been an infantry officer in Ypres.

Thank you for that Mott. I went back into my post and added a link to the Fine Arts Society's own page.

I probably know a bit more about the poetry of the First World War so it was very interesting to read about these very powerful and moving paintings.

Although it isn't what you were thinking of, I just came across a reference to the strong sense of poety in Nash's paintings.

Dulwich Picture Gallery had an exhibition back in 2010 called Paul Nash: The Elements. They noted that Nash held Blake in great esteem and suggested that within this poetry, there was a sense of his love for the country, touched with melancholy.

Edward Thomas, who died in battle, wrote poems not about WW1 conflict but about his beloved South Downs landscape. I wonder if Thomas and Nash knew each other.

After we did this subject at CAE, I had a look at the Weimar blog. It was amazing, especially Bomberg, Orpen and Nash. But some of the German painters must have seen Hell themselves and painted it. They were hideous.

There is an exhibition called Nash, Nevinson, Spencer, Gertler, Carrington, Bomberg: A Crisis of Brilliance 1908-1922, being displayed at the Dulwich Picture Gallery until the end of September. Well worth seeing, if you are in the UK in the next short time.

Otherwise locate the book Nash, Nevinson, Spencer, Gertler, Carrington, Bomberg: A Crisis of Brilliance 1908-1923 edited by David Boyd Haycock. It was published by Scala Publishers in 2013.

The artists had the daunting responsibility for visual presentation of the First World War since I believe the public was desperate to know something of the conditions in which its boys were living and fighting. Nash himself wrote "I am no longer an artist interested and curious, I am a messenger who will bring back word, from the men who are fighting, to those who want the war to go on for ever".

Nevinson poured out bitterness in a stream of articles for the popular press. His Paths of Glory (1917) is remarkable for the subject matter - two dead soldiers. This was unacceptable to the military authorities who censored it.

great journal article, many thanks. Of course the military authorities censored private letters, paintings, photos, poetry and everything that told the truth about WW1. If men at home saw what was really happening at the Front, the army would run out of volunteers. And since British conscription only went into legislation in Jan 1916 for single men, and in Feb 1918, for all men, there would have been a crisis.

But I am not sure that the public was desperate to know something of the conditions in which its boys were living and fighting. If my sons or nephews were at the Front, I would never have been able to sleep again.