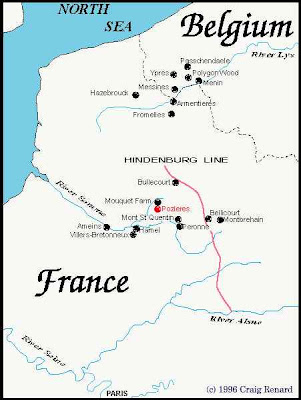 
The Great War resulted in the utter devastation of the town of Ypres in Flanders. The Menin Gate marked the start of one of the main roads out of Ypres towards the front line, on to an obscene loss of young life. There was no actual gate – just a gap in the old city walls and a bridge across the moat. When the First World War came to Ypres in 1914, the walls could not stop the heavy shells which were fired into the town. 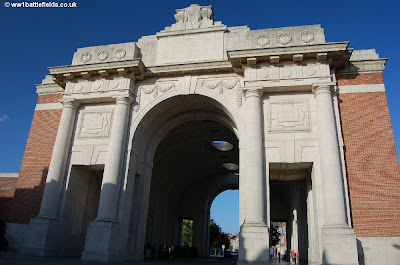 
Almost as soon as the war was over, there were plans to build some kind of memorial in the Ypres area. The Belgian Government off­ered Menin Gate to the British for their use as a commemorative site and the British Government decided that it should commemorate the Missing i.e soldiers of the British and Empire armies who had died in the 1918 fighting around Ypres, but who had no known graves. The number of dead was staggering - Britain: 40,000 men, Australia: 6200, Canada: 7000 and India 4200. [New Zea­land and Newfoundland soldiers were honoured separately]. This mem­orial was designed by Sir Reginald Blomfield and was opened in 1927.

Artist Will Longstaff (1879-1953) enlisted in the Australian Imperial Force at the outbreak of WW1 but was injured early in the war. In October 1915 he rejoined the war in France and Egypt before being evacuated, again, to England in 1917. In England, he returned to military art. Eventually Longstaff was appointed Official Australian War Artist in 1918 and produced many works during the final campaigns of the Western Front.

Australians and New Zealanders are used to war artists painting tent camps, men on parade, men in trenches, men in hospital and women farewelling/welcoming their soldier husbands and sons. But it was less common for artists to portray spiritualist ideas in WW1 paintings.

Longstaff painted Menin Gate at Midnight well after the war, after he saw the opening ceremony of the Menin Gate memorial at the ent­ran­ce of Ypres. Longstaff said that he was so pro­foundly moved by the ceremony that during a midnight walk along the Menin road he saw a vision of steel-helmeted spirits rising from the moonlit corn fields around him. It is said that, following his return to London, he painted the work as quickly as he could, so as not to lose the sensation of Menin Gate. 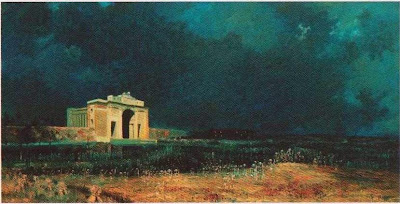 
The scene was painted largely in blue, which was part of the midnight imagery. It was created in a traditional, landscape structure: the moonlit memorial was placed on the horizon line, and before it marched a host of ghostly soldiers, portrayed by just a suggestion of bodies and helmets. In the foreground, the ground was covered with red pop­p­ies. In the distance, a small building added a dramatic con­trast to the Menin Gate and to the silence of the region.

Following the success of Menin Gate, Longstaff painted several other works on a similar theme. Immortal Shrine/ Eternal Silence 1928 dep­ic­t­ed ghostly soldiers marching past the cenotaph in London on Remem­b­rance Day 1928. This work was closely based on a watercolour by Long­staff held in the Imperial War Museum that depicted the cenotaph on a rainy day: the bold structure of the cenotaph, the reflections in the street, and the glimmering lights were similar, but the watercolour was peopled by the ghostly figures of ordinary citizens, rather than by soldiers, and in Immortal Shrine the cenotaph itself had an eerie presence, dimly spotlighted in front of the solemn, dark buildings.

Holties House blog wrote of the extraord­inary importance of ANZAC day on the Australian and NZ national psyche in ANZAC Day 2009. Sleepless Travels Reloaded blog said in ANZAC Day that “Longstaff’s Menin Gate at Midnight was the exhibit that really stood out to me, and is my favourite. It is displayed in a darkened alcove. I remember standing there practically mesmerised by the painting, holding back tears”. Craig Tibbetts blog reinforced the symbolism of the Gate in The Menin Gate Memorial. He said the gate itself, beyond which these men’s fate lay, became symbolic. It was the last place they marched through, on their way to the Front Line. Attempts blog 2006 in Poems for Armistice Day wrote 88 years ago tod­ay World War One ended: after four mad years, the guns at last fell silent.

I agree. As a passionately anti-war person, I hope the war to end all wars will never ever be repeated. Nonetheless spouse and I still thought it important to visit Gallipoli in Turkey a few years ago. We were very moved by the entire experience.

Thanks for the link Helen, and your article on Longstaff.

Hi! Thanks for the comment on my blog over at Sleepless Travels Reloaded . I think you probably got the link wrong on your post though.
Cheers!
- E

Ohh Evangeline, you are quite right. "Sleepless Travels Reloaded" was the correct blog title, but the subheading should have been "ANZAC Day".

I wanted to include the Sleepless Travels quote because Longstaff probably had the same impact on everyone seeing the painting. Even 70 years later, viewers find the image arresting.

These two items have been in my family for as long as I remember –and I am now 63 years of age.

I am wondering if there is anywhere I could take them to have them authenticated and valued.

Any help you can offer would be greatly appreciated

Since the originals of these two paintings are in the War Memorial, Canberra (see my post above), I assume your family inherited copies printed by the Herald Newspaper, so that the RSL could distribute copies to returned servicemen.

Thus the War Memorial in Canberra is the place to start your search.