When The Ghan first departed Adel­aide for Alice Springs in 1929, it was intended that it would one day travel through to Darwin. 72 years after this north-to-south route opened, The Ghan train IS running the entire 3,000 ks between Adel­aide & Darwin.  It took over 100 years of Federation to agree on one railway gauge!

Named for the camel-riding Afghans who once carried supplies to opal miners in the remote parts of the outback, it took almost 3 years of laying track through the most inhospitable parts of Australia. The 2.5 day ride glides past the red-hued Macdonnell Ranges, over the baked Great Victoria Desert, via vast sheep and cattle stations. It leaves twice/week, from both ends. 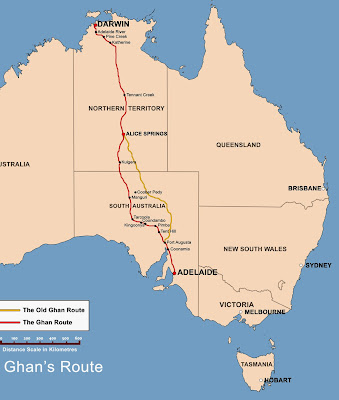 On board, travellers can enjoy the spectacular Australian land­scapes through the heart of the continent. But sight seeing tours (book Whistle Stop Tours on the train) are the best way to make the most of the journey. Alas The Ghan only has two set stops: in Alice Springs and Katherine, for 4 hours each. There are only two nights on board, so people who want to get off and tour other places will need to leave the train and join a later train. 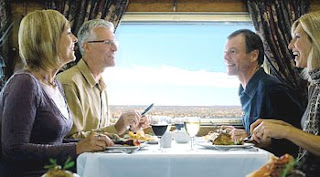 The Ghan’s carriages are totally silver from the outside. The dining car serves first-class meals and Australian wines, while the lounge bar is a meeting place for Australian and international visitors. The train’s internal decor highlights the dramatic colours of the desert land­scape through which the train travels. The best cabins are lovely.

I wish there was a half day stop in Coober Pedy (pop 3,500), a small town 846 ks north of Adelaide. The harsh summer temperatures mean that most resid­ents live in caves drilled out of the rock in the side of a hill, rather than actually under-ground. A stan­dard 3-bedroom cave home has a lounge, kitchen and bathroom. It remains at a constant temper­ature, even during the boil­ing hot summer months. And people work under­ground in mine shafts. The town is known as the opal capital of the world because 90% of the world's finest opals are mined there. Other interesting attractions in Coober Pedy include the mines, the graveyard, and the underground churches.


I also wished the train would stop for half a day in Uluru where it is worth rising early to witness the rock at sunrise. Travellers could learn about Uluru from Aboriginal cust­od­ians on the Liru Walk. Or choose to take a Harley Davidson tour, a desert camel ride or see unique wildlife at the Predators of the Red Centre show. The park is open from sunrise and sunset all week, and the Cultural Centre explains the spir­itual legends surrounding the rock. Listen to the didgeridoo as the sun sets on Uluru. 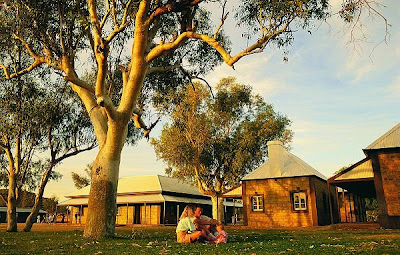 The train stays for 4 hours in Alice Springs (pop 38,000) so there is some time to explore the history of the town. Alice Springs has many hist-oric buildings eg the Overland Telegraph Station 1872-7, the Old Courthouse and Residency and the Hartley St School. The modern town of Alice Springs has both western and Aborig­inal influences. The town’s focal point, the Todd Mall hosts a number of Aboriginal art galleries and community events. The Royal Flying Doctor Serv-ice, brainchild of John Flynn of the Inland, was created here in 1939. For people wanting to see the outback, half-day tours visit Alice Springs Desert Park or explore the Aboriginal Dream time.

The Ghan arrives in the beef cattle town of Katherine (pop 7,000) early in the morning, only 6 km from the township by shuttle bus. In stunning Nitmiluk National Park, go on a guided cruise through Kath­erine Gorge, a series of 13 gorges cut in­to the Arnhem Land plateau by the Katherine River. The towering sandstone walls of Kath­erine Gorge house an array of wildlife as well as ancient Ab­original rock art. Commentary from local guide examines the gorge’s plants & animals, especially the freshwater crocodiles. Travel and Trains and Other Things blog went on a different tour that shows travel­lers the highlights of this outback town and its surrounding en­virons, includ­ing School of the Air, Katherine Museum and the Old Spring­vale Home­stead 1879. Jim and his friends re-boarded the train for the last part of the journey, clearly having had a splendid time. 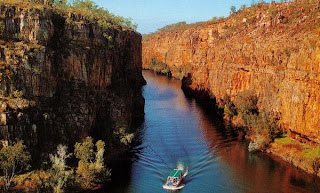 
The trip ends at Darwin train station which is located c20 minutes drive south of the city centre. Darwin has changed from the rough frontier town pre-Tracy to a modern vibrant multicultural city. It is home to the Indo-Pacific Marine & Australian Pearling Exhibition, which houses a huge aquarium. The Museum of the Northern Territory focuses on regional history, including exhibits on Cyclone Tracy and the boats of the Pacific Islands.

Darwin Harbour is surrounded by scenic mangroves and pristine tidal beaches. Some visitors want to go on a day tour to Litch­field National Park with the strange magnetic termite mounds. Swim in the nat­ural pool at Wangi Falls, view the beautiful double waterfall that is Florence Falls and see stunning Tolmer Falls. Travel to Adelaide River and join a guided crocodile cruise. Watch as salt water croc­odiles leap from the river. Or explore Kakadu National Park. 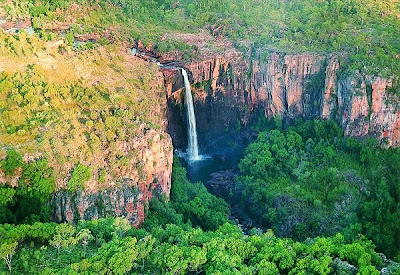 In The Bible on the Ghan, I really liked the idea that The Ghan has up to three private carriages: Chairman's, Prince of Wales and Sir John Forrest Carriages. The carriages have cabins, lounges and dining facilities, and would be perfect for a conference.

I don't think that I'll be going - it's too expensive! I suppose that's part of the reason why it's considered a luxury train!

I love trains! One of my favourite things about going to France with my mom is always the train trips. There's always something romantic and exciting about a train ride--especially in one as lovely as this one! If I'm ever in Australia, I'll have to do this!

This sounds a fabulous trip but not inexpensive I would imagine. There's a similar one in South Africa called The Blue Train I'd love to do as well but I suspect that both will remain a dream.

although you get a lot for your money, it is indeed a fair amount for a couple to pay. And that is only one way!

Travelling on Australia's longest train journey, the Indian Pacific, was reviewed in the paper today. Less elegant, fewer stops with tours, but more days of fun on board.

I am making my life's mission to go on every luxury train trip in the world, then to write it up on this blog. So far I have been on great trains in Scotland, Canada, USA, India, Australia etc etc but not South Africa. Yet!

I like the train trip service between these cities. It is an easy way of traveling for the people who want to travel with their whole family to these locations. Thank you for sharing this useful post with us.

I agree. Over extremely long trips, cars are too risky, buses are too uncomfortable and planes miss everything on the ground. But luxury train travel is brilliant.

I recommend people thinking about a trip on the Ghan read "Making (historic) tracks" in Inside History, Jan-Feb 2014. Written by Dorian Mode and Lydia Thorpe, the article describes the history tours available in Alice Springs, Kathrine and Darwin.

you mentioned Coober Pedy. See Gary Tippet's trip on the Ghan in royalauto.com.au. They bussed 42 kilometres from a train stop to the legendary mining town. And a detour to the multi-coloured hills of the Breakaways.

Correct! I had a look at travelonline (https://www.travelonline.com/trains/the-ghan) for their 2017-18 itinerary. There is a full day excursion to Coober Pedy in both directions.

Explore Coober Pedy which is an ‘underground’ town. Tour the town and hear about its history. See the Serbian Orthodox Church, Umooma Opal Mine & Museum and the grassless golf course. OR discover the beauty and history of Australia’s national gemstone at the Umoona Opal Mine and Museum, one of Coober Pedy’s original attractions and the Opal capital of the world. OR discover the Majestic Breakaways on a guided walking tour.