Apollo Art Awards 2020: winner of the Exhibition of the Year

The Annunciation, Jan van Eyck, c1425.
National Gallery of Art, Washington, DC
Apollo is proud to announce the winners of its annual awards. Dating back to 1992, the Apollo Awards celebrate major achievements in the art and museum worlds.

One of few capital projects to have steamrollered its way through the pandemic this year (at a cost of £40m), the Box draws together the old civic art museum and library, their renovated buildings linked by a large extension that includes on-site collection storage in the box that caps off the structure.

The renovation of these galleries, the Met’s flagship project in its 150th year, has involved a reconsideration of the global contexts of six centuries of British decorative arts. Around a quarter of the objects here were acquired with the new display in mind.

This €50m project has done much to improve facilities, but has also reintegrated sculpture and painting in the galleries and increased the sense of spectacle in the display of these great collections. Extensive conservation has been carried out on some 200 paintings and 300 frames.

This new museum for the Royal Library of Belgium, displays manu­scripts from the collection of the dukes of Burgundy. c100 of them are shown across two floors, alongside armour, prints, sculpture and paintings, with the appreciation and interpretation of manuscript illumination at the heart of the museum’s mission.

The first dedicated university art museum in Nigeria is named after Prince Yemisi Shyllon who has donated c1,000 works it – a founding collection that ranges from pre-colonial objects to modern and contemporary works by Ben Enwonwu, Nike Davies-Okundaye etc. Shyl­lon has also committed to funding the museum for at least 15 years. 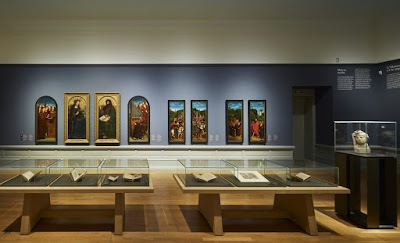 Ambition and intimacy are not the most natural of bedfellows. But the achievement of Van Eyck: An Optical Revolution was that its curators realised the grandest imaginable exhibition on its subject, in scope and scale, while allowing visitors a beguiling proximity to so many paintings by Jan van Eyck. Of 22 works ascribed to him, 13 were on display here; anchoring portraits and devotional works on loan from European and American collections were the eight restored outer panels of the Ghent Altarpiece, as well as the Adam and Eve from the upper register of its interior (the versos of the central outer panels).

Through 13 galleries, the exhibition provided what Apollo’s reviewer described as near perfect conditions for close looking. In splitting up the panels from St Bavo’s Cathedral, and displaying them at eye level, it gave visitors the chance to scrutinise Van Eyck’s sur­fac­es, his feeling for light and his mastery of de­tail, and to revel in the honest humanity of his vision. While the dis­play con­textualised Van Eyck with contemporaneous objects and Italian paint­ings, it mis­sed no trick in creating moments of intense drama in the juxtaposit­ion of his works: the two versions of St Francis Receiving the Stig­mata shown side by side; The Annunciat­ion from Washington, with its jazzy archangel, in the same room as the cor­responding pan­els from the Ghent Altarpiece; and, in the penultimate gallery, five of Van Eyck’s portraits with the panels depicting the altarpiece’s donors.

Beyond that drama was a sense of integrity, of an exhibition in the right place at the right time. Since 2012, the MSK Ghent has hosted the restoration of the Ghent Altarpiece. In parallel with that proj­ect, the Closer to Van Eyck website has gathered and made publicly available high-resolution images, including those using scientific imaging techniques, of most of the artist’s works. In this context, Van Eyck: An Optical Revolution felt like the dividend of local and international collaboration: several loaned paintings had been newly conserved for the exhibition; its robust catalogue contains 19 essays by leading Van Eyck scholars.

130,000 people could visit the exhibition before it closed due to the pandemic, halfway through its scheduled run in mid March. For many of them, the memory of it will have provided much consol­at­ion in the months that followed.
Posted by Hels at 20.11.20

Hello Hels, Worthy as are these museums and exhibitions, I am not sure that it is a good idea to promote them just at the moment. It would be unwise to cause increased museum attendance, especially when we aren't 100% sure that current protocols are entirely safe. Also, it is somewhat unfair to museums that had to or decided to close right now, and removed themselves from the competition. I realize that these exhibits had costly preparation, but I still think it would be better to use current resources for other projects and future exhibitions that will make up for these curtailed ones.

There is nothing like the thrill (or advantages) of seeing art in person. That is why it is a good idea to acquire exhibition catalogs, which during in-between times can revive the glory of art we have previously been lucky enough to see.
--Jim

The Aberdeen Gallery was impressive. You would have loved the silver, Helen.

Oh, the van Eyck exhibition was glorious! I'd not seen the Ghent altarpiece of the Archangel Gabriel before - his wings look like cut watermelon. Quite delicious! We lived in Ghent for several months twenty years ago and I'm terribly ashamed to say that I never visited this gallery. It looks like it may have had a lavish spruce since the pre-EU days.

Hmm, Australia is nowhere to be seen. While I think our museums, galleries and exhibitions are good, I often think they could be better and focus less on visitor numbers for income. But of course they all need money to continue.

I can understand why Apollo wanted to celebrate and grow their yearly awards, since all the normal awards go to film stars, singers, sports stars, scientists etc and not to galleries, artists, art books etc. But 2020 was such a terrible year for the entire world, none of us would have visited public spaces.

So if it was possible, I would have loved the 2020 gallery tours and lectures to be seen by the art-loving world on-line. After all, the galleries had already gone to enormous effort and cost, gathering all the items from around the world in time for the exhibitions. I agree that seeing the exhibits in person would be better, but that is not going to be possible for quite a while.

you know my taste so well :) I am passionate about the decorative arts, but most especially old silver.

Right! 20 years ago your priorities were different :)

The optical revolution was the largest Jan van Eyck exhibition ever, especially since so few paintings and drawings by Jan van Eyck (c1390-1441) survived. Naturally the recently restored exterior panels of the Ghent Altarpiece were central to the exhibition. For a virtual tour, go to https://virtualtour.vaneyck2020.be/en/adults/room-1/room-0-1

As long as entry into Australian museums, galleries and exhibitions is free for all children, I think each mother, father, teacher or grandparent would be happy to pay. My personal parental goal was to take my boys to every site in Melbourne, Geelong, Bendigo and Ballarat... and we did quite well.

Oh, yes I did the tour, it was terrific!

I hope my students liked my lectures, but somehow I think they find blog posts less abstract and much more useful :)

I have seen the Ghent Altarpiece several times over the last thirty years. It never fails to impress. I am a big admirer of museums and art galleries and I have a huge collection of exhibition guides and museum guides.
London does have a large amount of places like this to visit. My favorites are probably The Victoria & Albert, The Wallace Collection, Sir John Soane's Museum and, in Oxford, The Ashmolean. (We also loved the Aboriginal art in the NVG in Melbourne!)
CLICK HERE for Bazza’s knowingly knackered Blog ‘To Discover Ice’

Me too.. I didn't want to leave the UK to go home to Australia, largely because of the galleries, Georgian architecture, town planning etc. The famous places you mentioned of course, plus some of the smaller, more specialised sites eg Bowes Museum Durham and Fitzwilliam Museum Cambridge.

Hi Hels - there are amazing museums around ... all are special for various reasons ... love the suggestions you've made as too your readers. I love Goldsmiths in London, as too the Guildhall Gallery - usually relatively small exhibitions. Oddly enough I booked a Goldsmiths exhibition for this November ... but already booked, so tried January 2021 - also fully booked ... so took up the November 2021 one - I got lucky ... this time next year ... I'll be up at Goldsmiths - love the Livery Company ... and its creative attribute the Goldsmiths' centre nearby. I wrote a post 14 months ago about the Hammerclub exhibition at the Aberdeen Museum as too seeing it down in London shortly after ... brilliant workmanship. Stay safe - Hilary

bless your heart. I went straight back to your post called Hammering Silver at Goldsmiths and remembered it very well. But how extraordinary that you couldn't get into the Goldsmiths exhibition until next November!! The pandemic certainly changed over lives.