By 16 Nora had sold her first oil painting to Dame Nellie Melba, and by 22 she was in every major art institution in the country. She had the art urge from a very young age, but there were obstacles. She was a schoolgirl whose teachers didn’t know what to make of her tal­ent. Then she won the 1938 Archibald Prize but unfortunately shy Nora loathed the press. And then she fell in love, and subjug­ated herself to the life of a 1950s housewife. Worse still when her hus­band left her for a younger woman. But in those difficult times, she return­ed to her art as her solace and her regeneration.

When WW2 broke out, two of Nora’s brothers joined the air force, and she wanted to Do Her Bit as well. Like dad, Nora was a pacif­ist, but she saw the shiploads of young men leaving Sydney Harbour, and was devastated by the military trains going to Queensland for training.

Nora decided she could contribute to the war effort through her art, even though no woman had ever applied to be an official war artist.  She applied, with the support of her two of her mentors, Sydney Ure Smith and Louis McCubbin. A close friend of her father’s, Smith was a noted publisher-artist, and chairman of the War Art Council. McCubbin also lived in the shadow of his own famous artist father, the Australian impressionist Frederick McCubbin, and was the director of the National Gallery of South Australia.

The War Art Council and the army argued about what her rank and pay would be but finally, serving from 1943-46, Nora was commiss­ioned to document med­ical and res­earch-units, and wounded soldiers. Nora began by painting studio port­raits of the heads of the women’s services – Matron Annie Sage, Colonel Sybil Irving, Lieut. Colonel Kathleen Best, Lieut. Colonel May Douglas and Matron Annie Laidlaw. Matron Sage wanted Nora to be able to go to the casualty clearing stations in New Guinea and into the tropics of northern Queensland to record the nurses’ work there.

From Nov 1942, after the Kokoda Track campaign ended, the Royal Australian Air Force personnel set up a medical receiving station in Port Moresby.  In early 1944, 15 nurses from the Royal Australian Air Force Nur­sing Service were recruited to the newly fomed Ev­ac­uation Transport Unit aka Flying Angels. They flew into combat zones, del­ivering supplies and evacuating the wounded back to Aus­t­ralia. Nora was sharing quarters with some of the sisters, and was keen to do their portraits. The Evacuation Unit’s History is now held in the Aust­ralian War Memorial’s Nation­al Collect­ion. 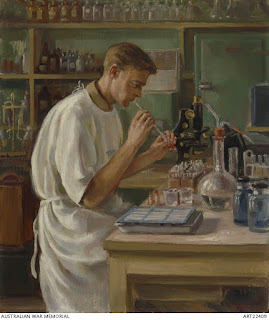 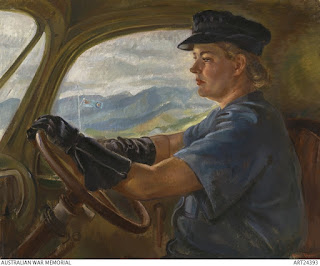 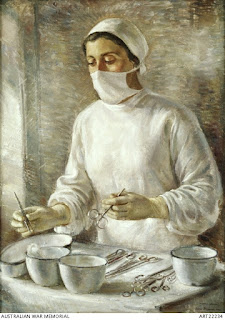 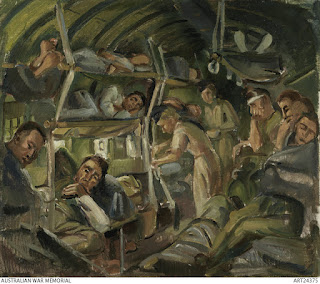 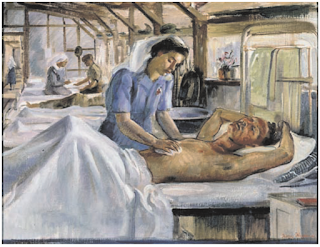 Nurse sponging a malaria patient in New Guinea, 1945
All photos are credited to the War Memorial, Canberra.

Nora was appointed to the Australian Women’s Army Service, but the AWAS was only allowed to serve at home. She was frustrated by her inability to travel to the Front because of the danger, so she was put on the Special Army List. This allowed her to travel overseas to re­cord the work of medical staff in casualty clearing stat­ions in Lae & Finschhafen in New Guinea, Morotai Island and Borneo.

When she arrived in Finschhafen, the conditions were gruelling and the troops found her unconvent­ional, but she pushed on. The way Nora de­scribed things in her letters was unimaginable: deep mud, stink­ing rotting Japanese food and decomposing bodies.

Mildew damaged oils, so Nora worked quickly in water colours instead. She built up a large portfolio and carefully annotated her art so that she could work the paintings up into full-scale oils back home. Nora spent 7 months in New Guinea before leaving, suff­er­ing from severe dermatitis.

Nora loved Dr Robert Black, a tropical medicine sp­ecialist, but he was married. When the war ended, Robert returned to his family in Sydney, and later trav­elled to Britain to take up a re­search fellowship in Liv­erpool. Nora returned home to Melbourne and the pair still corresponded. A year later Nora moved to Liv­er­pool and took an apartment near his work. When Robert left his wife, the two lived together in Sydney, scandalising Nora’s family. They were married when Rob­ert’s divorce was finalised in 1953, toget­her for another 20 years before he left her for a younger woman!

Her passion for art continued, but she never sought publicity and was largely forgotten for dec­ades, possibly because Nora always lived in the shadow of her famous father. She largely re-emerged at in the late 1980s when, celebrated by the major art institutions, attention restored her to art history.

In the 1990s Anne-Louise Willoughby opened Nora’s history via family con­nections, spending 4+ years resear­ch­ing and writing the artist’s biography. Nora died in 2003 at 92, still living and working in the house in Hunters Hill that she had shared with Robert Black.

The first time I ever saw Nora’s wartime works in the flesh was when the Mem­or­ial’s collection was loaned to the Ian Potter Centre, National Gallery for the 2019 Hans and Nora Heyson: Two Generations of Aus­t­ralian Art Exhibition. Her 30+ paintings helped Nora become rec­og­nised as one of the C20th’s most significant female Australian art­ists.

I have some knowledge of her and I think I must have seen the exhibition at the Ian Potter Gallery. No doubt about her artistic talent.

There is a special Heysen painting of a nurse and a malaria patient in hospital. I know your family member suffered from malaria and how horrible that was.

thank you...the beauty of Nora's art was more traditional in her early years, but it became less beautiful and more heroic during the war years.

She must have found it difficult to make her name in an art world that was already dominated by her father Hans Heysen. His trees, cows, horses and country sheds were so talented, and so iconically Australian. But Nora was more modern, and more aware of the importance of women's role in the world.

This week, an older woman accidentally called me by my late mother's name. I didn't exactly live in mum's shadow, but I was always aware of the standards I had to reach.

I just added the painting about a Nurse Sponging a Malaria Patient in 1945. Many thanks.

I have no doubt about the horrible impact that malarial infection had on our fighting capacity. So the Australian Army devoted significant resources to new research into the treatment of malaria in the last 2.5 years of the war. The Land Headquarters Medical Research Unit in Cairns was well documented by Nora.

Hello Hels, Thank you for telling us about Nora Heyson, a brave and committed artist. Documentation is important work, and the artist's eye can capture things that a camera cannot. Heyson's portrait of Florence Miles shows great inner strength, and in some aspects calls to mind the famous Rosie the Riveter.
--Jim

Great comparison. Rosie the Riveter wanted to recruit female workers during WW2 for jobs that they probably had never considered before eg manufacturing tools or arms. I am not sure that men were happy to think of their wives as brave, gritty and strong. But the urgent need for patriotic women to enter the workforce changed all that.

Nora Heysen was not part of a recruitment campaign, but she was full of admiration for the strong men and women working in hospitals, res­earch units, evacuation planes and army camps.

Australia's most academic medical journal, the MJA, published "The war on malaria and Nora Heysen's documentation of Australian medical research through art between 1943-45".

Many thanks. Impressive coverage of both the malaria research and the war art by Cherie L Prosser and Ian A Clark.

Hi Hels - it seemed she made an important contribution to recording history ... especially with her art, and in areas where male artists wouldn't have been interested ... and then via her letters and annotations of her art. I'm glad she's been reinstated and now has a place in Australian history particularly with her paintings ... thank you - Hilary

I am also very pleased. But some people have to wait a long time before they are "discovered", especially women I suspect. My only sadness is that Nora was a VERY elderly lady when the first book and exhibitions were opened to the public.