Susie Harries’ Nikolaus Pevsner: The Life is an interesting book because it focuses on my hero’s personal life rather than his lecture notes. Nikolaus Pevsner (1902–1983) was born in Leipzig into a com­fortable and cultivated Jewish family. Father Hugo (1869-1940) was a fur merchant and mother Annie Perlman (1876-1942) was a pianist. Pevsner attended Leip­zig, Munich, Berlin and Frank­furt Universities.

It was clear in his diary that Nikolaus Pev­sner wanted to be a real German and was embarrassed by his parents’ Judaism and his father’s association with trade. In 1919 his bril­l­iant brother Heinz committed suicide, so Nikolaus aband­oned Judaism and con­verted to Lutheran­ism that same year.


Receiving his PhD in 1924, Pevsner married Karola Lola Kurlbaum, daughter of the respected appeal judges in Germany. It was a life­­­long, sometimes unstable marriage, with 3 children. Lola was al­so Jew­ish but considered herself 100% Prussian and hoped to raise her husband up to her own cultural standard.

Pevsner's doctoral thesis, Leipziger Baroque (1925) was a study of It­alian man­n­erist and baroque painting. Soon he was working as As­s­istant Keeper at Dresden Gallery (1924–8), assisted the dir­ec­t­­or of the Dresden International Art Ex­hibition in 1925 and became lecturer at Göttingen University in art and architectural history (1929–33). Loving English art, he travelled widely in England in 1930.

Back in Germany Pevsner found elements that were admirable about the Nazis, indicat­ing how much his outlook on art history matched theirs. And he really DID support Goebbels in his drive for pure, non-decadent German art. Apparently he said of the Nazis in 1933 "I want this movement to succeed. There is no alternative but chaos".

Yet to the Nazis, Jewish-born Pevsner’s 1921 conversion to Prot­est­antism was nothing; he would always would be a Jew. And his passion for med­iev­al Saxon sculp­ture, the glory of German art, didn’t prove his Germanness either. The young man was caught up in the ban on Jews being employed by the Nazi state and lost his job at Göttingen in May 1933.

In 1934 the family emigrated and friends found Nikolaus a research post at the University of Birmingham. In 1936 he est­ablished his name by publishing Pioneers of the Modern Design, the single most widely read book on modern design.

He had no social life and little sleep. After a day looking at buildings and taking endless notes, Pevsner worked on his notes at night and planned the route for the following day. 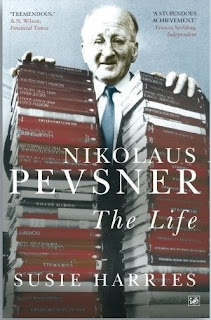 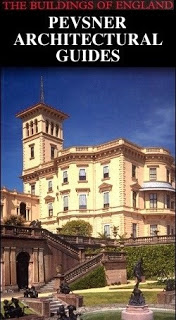 Isle of Wight
one of Pevsner's Architectural Guides

He wrote mostly about English architecture, yet what he really admired was the modern functionalist German style. Pevsner traced the evolution of the C20th architect­ure from sev­eral sources, from William Morris and the Arts and Crafts movement, Art Nouveau and Victorian architecture, to Walter Gropius and his Bauhaus colleagues who broke with the past! Be still, my beating Bauhaus heart!

During WW2, Huyton Liverpool was an internment camp for prisoners of war. “Enemy alien” Pevsner was imprisoned there in 1940 and was not released until the Director Gen­eral of the Minis­try of Information intervened. Then Pevsner settled in London and caught up with the other German speaking refugees: Walter Neurath who founded Thames & Hudson art pub­lishing, and art historian Ernst Gombrich.

I agree that architecture was the most important of the arts because it was the most closely connected with family life. Sad­ly Pevsner found that the study of archit­ect­ural history did not win as much academic in­terest in Britain as it did in Europe. Social changes, the power of the Church and the Nobility, the rise of the estate of burgesses and eventually the emergence of the urban pro­letariat, underpinned his Outline of European Archit­ec­ture (1943).

By war's end, Pevsner was established as an art-historian who loved “soothing, civilised” England, becoming a British citizen in 1946. But it was not until the UK was safely post-war that Pevsner told his children about their Jewish Russian-German heritage. Or that the grandparents had been killed in Leipzig in WW2.

Pevsner joined the acad­em­ic staff at the Univ­ers­ity of London and also edited Architectural Review (1942-45) which ran until 1957. The Pelican History of Art, und­er Pevsner's general editorship, became one of the most authoritative works on the visual arts in English. From 1949 to 1955 he was Slade Prof of Fine Art at Oxford (1968-69), and a Fellow of St John's College Cambridge.

[Apart from Nikolaus Pevsner, my art history students were asked to read the brilliant works of Aby Warburg, Erwin Panofsky, EH Gombrich, Adolf Katzenellenbogen, Otto Kurz, Fritz Saxl and Rudolf Wittkower. Note that they were all trained at German-speaking universities!] 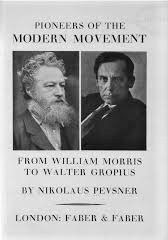 Pioneers of the Modern Movement
by Nikolaus Pevsner, 1936 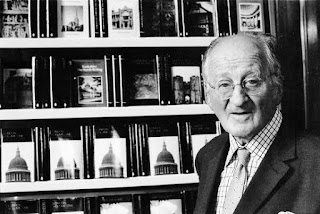 Nikolaus Pevsner and his books, in 1980

Pevsner was, and is best known for editing the monumental series, The Buildings of England (1951-74). Intending to cover every single building of architectural interest across Britain, he wrote 32 of the books himself and 10 with collaborators, personally visit­ing every building he described. A further 4 of the original series were writ­ten by others. This series became Pevsner Architectural Guides.

In 1958, Pevsner became founding chairman of The Vict­orian Society for the study and protection of Victorian and Edward­ian art and architecture, thankfully saving houses, churches, railway stations and other Victorian monuments.

This Mittel-European Jew of Russian descent became a Protestant Englishman, knight of the realm, lecturer at the BBC, academic and publishing phenomenon, founding-father of academic architectural history in Britain. Pevsner died in London in 1983, memorialised in Church of Christ the King, Blooms­bury. He was buried in St Peter Wiltshire churchyard.

Hello Hels, I get tired just reading about all of Pevsner's accomplishments and activities. I admired that although he championed Modern architecture, he knew the importance of protecting monuments from all periods--remember that in the 1950's, Victorian was often considered an eyesore rather than something to admire and save.
--Jim

Hel, I am so sorry the Museum has closed for now and the lectures postponed. Mind you, Pevsner had more to say about German and British architecture than he did about French.

most people love their own era's cultural objects, in architecture, music, visual arts, even literature. But they think their parents' generation had horrid taste and wouldn't touch their inheritances with a barge pole. The grandparents had better taste, and the great-grandparents' generation had the best taste of all. Thus I might loathe Rococo (C17th), love Georgian (‎1714–1837), found Victorian stodgy and Edwardian much more liberating etc.

Pevsner took each type of architecture seriously, in its own right. I like to think he actually admired the functionalist Bauhaus style (1919-33) most, but that is probably because I loved Bauhaus :)

we are trying to proceed with lectures via Zoom from home. But you are correct.... life isn't the same :( As long as we are all healthy and well!

Hi Hels - thanks for this ... I really enjoyed the read - and have learnt where Pevsner came from ... he is so often cited and referred to - so I knew his worth ... but had no idea of the background and how he ended up here ... thanks so much - cheers Hilary

The first book on Architecture that I bought, as a teenager, was a book by Pevsner about the buildings of England, full of detailed line drawings. I'm not sure where it is now but I devoured it at the time (I didn't eat it!).
He seemed to me like an ancient and distant being so thanks for filling in some background.
CLICK HERE for Bazza’s sometimes Sartorial Blog ‘To Discover Ice’

Pevsner was very fortunate to leave Germany in the middle 1930s, even though he was locked up in a prisoner of war camp in Liverpool early in the war years. He learned brilliant English (with an accent) and met every other German academic in the same position as he was: Walter Neurath, Aby Warburg, Erwin Panofsky, EH Gombrich, Adolf Katzenellenbogen, Otto Kurz, Fritz Saxl and Rudolf Wittkower. I think he walked every street in Britain, taking notes of the architecture and doing drawings :)

what an amazing life . He seems to have demanded and taken the freedom to be himself at the very core of his being . I wonder how he got on with parents and then with his own children.

Pevsner's parents refused to leave their beloved Germany but Nikolaus' grandparents lived in London and would be close family for the new arrivals. Later Nikolaus learned that his father had been murdered (in 1940) and his mother committed suicide in Germany (in 1941), in order not to be sent to a concentration camp.

Nikolaus loved his children and his students, but he was so busy during the days and nights, the relationships may not have been as close as they would have wanted.

Interesting . I am glad he loved his family . So sad about his parents but it all must have felt so surreal and unbelievable to them .

When the Nazis took over the German government in 1933, many people did fear for their lives and left Germany, but only if they could get visas to other countries. On the other hand, proud Germans who had fought for the Fatherland in WW1, held important jobs, earned honours and made money during the interwar years, had NO plans to leave. Especially secular Jews and proud Germans, like Hugo and Anna Pevsner.