Journalist Benjamin Balint sought to explain to literature lovers the complex story of Kafka’s manuscripts, after the author’s early death in 1924. In his book Kafka’s Last Trial (WW Norton, 2018), Balint described the legal and literary history that took place in an Israeli court - where three parties were fighting over Kafka manuscripts.

First the backstory. Kafka had told Brod that “everything I leave behind is to be burned unread and to the last page.” But when the Kafka died of TB in 1924, Brod could not bring himself to burn the unpublished works of the man he con­sid­ered a literary genius. Instead Brod became very pro-active literary executor, devoting his life to rescuing Kafka’s legacy. Thus the ownership question had been a problematic one since the 1920s! 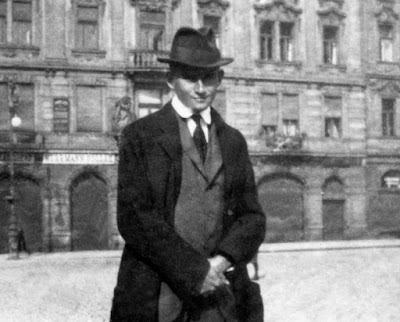 As WW2 started, Brod left Prague on the last train out, escaping to Palestine with a leather suitcase stuff­ed full of Kafka’s original manuscripts. So Brod twice rescued Kafka’s legacy, once from intentional de­struction and once from Nazi oblivion. Later the surviving documents were them­selves caught up in an endless bureaucratic tangle.

Esther Hoffe (1906–2007) worked as Brod’s Czech secretary and close friend in Israel for more than 20 years. When Brod died in 1968, he had already written a will in which he gifted Kafka’s manuscripts and letters to Hoffe as his literary executor. Hoffe sold some of these still unpublished papers and held on to the rest.


When she died in Tel Aviv in 2007, Hoffe willed the manuscripts to her two daughters, Eva and Ruth, who sought to probate her will. Just as the will was about to be approved, the National Library of Israel petitioned the Tel Aviv Family Court to prevent the estate from passing to the daughters. A series of articles in Haaretz argued that the manuscripts were being held in unsuitable conditions, scattered between apartments in Tel Aviv and bank safes abroad, instead of being made available for scholars.

The State of Israel contested the part of her will that concerned the material she inherited from Brod either long before his death, or from his will. The position of the State was that Brod's literary estate was not hers to dispose of as she wanted; Brod's two ambiguous wills (1948 and 1961) both expressed the wish that his literary estate be placed in a suitable library at home or abroad.

Eventually the Israeli court awarded the manuscripts to  the National Library in Jerusalem. The book thus became a fascinating tale of literary friendship, loyalty, political power, law and re-trials.

The issue had already been adjudicated in court in 1968 and 1973, but it had never been the story of two conflicting countries before. Now an international legal battle erupted to determine which country could claim ownership of Kafka’s work: 1] Israel, where Kafka dreamed of living but never entered or 2] Germany, where Kafka’s three sisters were exterminated during the Holocaust. In the book Kafka’s Last Trial, Benjamin Balint described this provocative trial in Israeli courts, packed with legal, ethical and political debates. Of course in this contest I noted Germany’s and Israel’s national obsessions with overcoming the Holocaust traumas of the past. 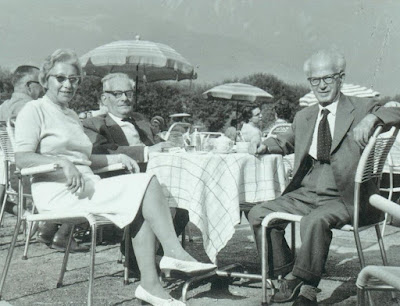 In the third court case, the legal issue of who the property belonged to became less important than a much larger question Who owns Kafka? Two arguments were made for Germany over Israel. Firstly Esther Hoffe had sold some of her holdings to the German Literat­ure Archive of Marbach am Neck­ar. This archive already had a good col­lection of Kafka material, so that Marbach, one of the world’s most import­ant literary institutions, should have been a more suitable home. And Marbach was clearly much better-equipped to deal with scholars.

The second argument for Germany was based on one of the identity-issues raised by the case i.e for all their embrace of Kafka as Jewish personal­ity in Israel, interest in Kafka's writing there was always a bit limited. Kafka had never become part of any Israeli project of national revival! Nor was there a Kafka cult in Israel, as there had been in Germany and Czechoslovakia. The author had not explicit­ly dealt with Judaism in any of his writing, so was he simply a Czech national who wrote in German?

The Balint book examined Eva Hoffe in court in 2016 running the Last Appeal. In that year it was determined that Esther had only been the caretaker of the Brod estate during her lifetime, but that the Nat­ional Library of Israel was indeed the appropriate repository for the papers. 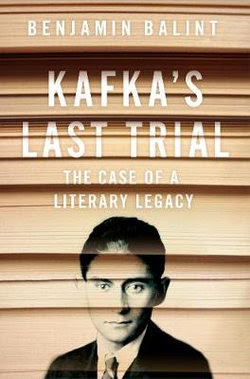 Fortunately Balint did understand the far-reaching implicat­ions of the unusual case, beyond the strictly legal aspects. The story of who owns the manuscripts was a long and fascinating tale of literary friendship, loyalty, political power and trials. Max Brod’s estate, which was locked up for years by their elderly custodians (Brod’s secretary and her daught­ers), was willed to Israel’s National Library. The irony of a Kafka estate being blocked for many decades was not lost on Kafka readers, though the final judgement did order the papers back into the National Library’s hands.

The National Library in Jerusalem has since announced that Kafka's papers will be digitised, with access to researchers wherever they live.

Hi Hels - how very interesting ... I knew very little ... but you've sent me off on some rabbit runs. It's great when some literary custodians decide not to follow their instructions - so we can see, read and comprehend his thought processes and they will be stored in our libraries and be available for study. Thank you for this - Hilary

I am very uncertain about this question, having been in a battle over my parents' wills for the last five years. On one hand, Kafka trusted Brod with a sacred trust... to fulfil the late writer's clear wishes. On the other hand, Brod understood that he was the only person in the world to save unique literary treasures.

Max Brod turned out to be a very devoted executor. He dedicated the rest of his life to his sacred task.

I read Kafka in English. Now I wonder if the translation captured the real writer.

Hello Hels, The most important aspect of an archive, after its basic preservation, is that the materials be kept together. In today's climate of high values, too often archives are seen simply as sources of revenue, available to the highest bidder. In this manner the collections are "cherry-picked" with famous manuscripts or perhaps architects' renderings of their most famous projects going hither and yon, with basic care often lacking, and little to no chance of the items being available as a group to scholars.
--Jim

that is a dilemma with every author, especially an author not alive to discuss meanings with the translator. But with Kafka, language was a very special issue. His language was marked by surreal distortion, sometimes reflecting a scary world where people were dehumanised.

I believe in this case, all the individuals and organisations seeking legal ownership of Kafka's material were not thinking of future sources of revenue. Rather the German, Czech and Israeli literary archives and libraries truly believed they were fulfilling their national responsibilities, preserving one of "their" most famous writers. But oh the years, the lawyers, the trials and the pain to Kafka's and Brod's executors.

Yes it does sound as if the right things has happened in the end . The Hoffe ladies were obviously making money but who can blame them. Its obscene how much document ,paintings etc sell fro these days . Often the artist never seeing any of the loot.I am glad Max Brod was wise enough to see that a mind in the last throws of TB , might not fully comprehend what was best .It hard to watch an aging sick mind trying to control what happens to their worldly goods after they have died. Often bad mistakes are made which resonate for years to come . We all need to give up the seeking of post death control. We need to accept that out time is over and have a bit of faith in the future generations to make the right decisions.Ihavent been brave enough to say that to the elderly in my life so far !!!!

There was a local case but I can't remember the details. The court judged a will not on legal terms but on the intent of the will, which was something like leaving works of art to our National Gallery, or perhaps it was a set amount of money to buy art works, that inflation would have dealt with very swiftly if the money was not invested.

Adam Kirsch wrote that Kafka hated his own scribbling which was nothing more than his own materialisation of horror. It shouldn't be printed at all. It should be burnt, he believed.

Clearly the writer's ambivalence about his own work was an expression of deep uncertainty about himself. Kafka suffered from a crippling lack of self esteem such that Max Brod had to make the decisions for his dead friend.

I can't think of the particular case just at the moment, but I am certain many similar issues have arisen in the past. The question always relies on "the true intent of the recently departed, as written in his/her will". And secondly "who is in the best position to determine that true intent". Even sons and daughters bitterly compete with each other, let alone second spouses, closest friends, solicitors, judges and foundations that stand to benefit from the will.

Adam Kirsch wrote that Kafka hated his own scribbling which was nothing more than his own materialisation of horror. It shouldn't be printed at all. It should be burnt, he believed. custom sequin pillow

Nod...I quoted Adam Kirsch because his article was published in The Atlantic after the final court appeal was decided in 2016. Well worth reading.

Worth reading.
Residential Drafting Services Near Me Portland Oregon

that is true. But what a shame Kafka died so early. His total writing career might have been amazing.