Russian ANZACS who fought for Australia in WW1

Federation came to Australia on 1/1/1901. The Australian & New Zealand Army Corps were formed in Egypt in 1915 out of the 1st Aus­tralian Imperial Force/AIF and the 1st New Zealand Expeditionary Force. Soon after the birth of the nation, the Anzacs became best known for their bravery at the Battle of Gall­ip­oli; for gener­at­ions, it was commonly accepted that the Anz­ac tradition was in­separably identified with British Australians.

Yet in WW1, 1037 Russian men enlisted in the AIF, and most went on active service over seas. As the book Russian Anzacs in Australian History by Elena Govor (UNSW Press, 2005) says, they constituted the biggest non-Anglo national group in the AIF. The accompanying website has a page dedicated to the family- and service-history of each soldier.

During WW1, Russia was an important ally of the British Empire. So it made sense that Russian emig­r­ants to Aust­ral­ia would be expected to return to Europe for the war. The tough Baltic seafaring peoples — Finns, Latvians, Estonians, Baltic Germ­ans and Lithuanians were particularly well adapted to the armed forces. The remainder con­sist­ed of Ethnic Russians, Catholic and Jewish Poles, Ukrain­ians, Belarussians, Caucas­us Ossetians, and Russian-born West­ern Europ­eans who were al­ready flocking to Australia. 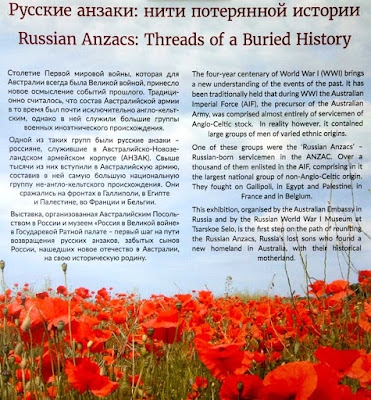 
Russian émigrés had diverse reasons for enlisting early in the AIF: 1] some had fled their nat­ive land owing to ethnic or rel­igious pers­ecution in Eastern Europe, 2] others were lab­ourers seeking quality jobs, 3] some had patriotic sentiments towards their new country, 4] many felt pressure exerted by the Russian consulate, 5] some to be with their mates or 6] the unemployed had few alternatives.

But their acceptance into the famous Anzac brother­hood was often hard-won. A lack of English was one stumbling block. In battles fought togeth­er, a comradeship with their Aust­ralian friends was forged. Major Eliazar Margolin grew up in the Jewish part of Belgorod, south of Moscow, near present-day Ukraine. While commanding the 16th Battal­ion at Gallip­oli, Margolin and his thick Russian accent fought relent­lessly for the lives of his boys. Plus he won official ack­nowled­ge­ment of his bravery with the Distinguished Service Order.

Later enlistment of Russian émigrés was due to the pressure exerted by the Russian government from Jan 1916 on; it demanded the consc­ript­ion of all its subjects, at home or overseas. My grand­father, who arrived in Australia in Jan 1914 was desperate to go home to Russia; by the time war broke out in Sep 1914 he was prep­ared to lie about his age and to fake his late parents' signatures. He spoke little English, but he was very welcome in the Australian army because of his fluent Rus­sian, Ukrainian, Yiddish and German, average Hebrew and poor Polish. As did his brothers & first cousins.

In 1916 the Australian official historian Charles Bean wrote that Pozières ridge in France is more densely sown with Australian sacrifice than any other place on earth. During the Pozières Battle, an entire section of the 9th Battalion was made up of Russians who became Australian soldiers. 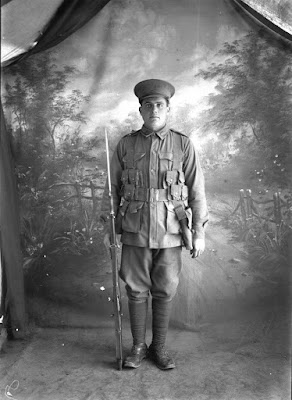 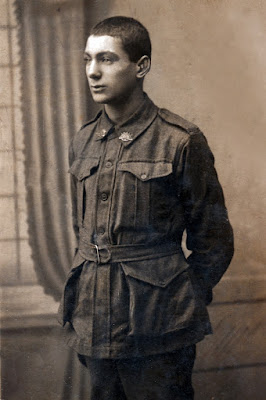 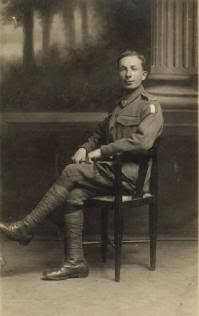 We can see how the Anzac legend worked for someone who was different, had little English or spoke with a thick accent; how mate­ship was forged in battles, how suspicions ruined lives. Their stor­ies were also stories of the unsung heroes of the war – the Aus­t­ralian women, those landladies who sent parcels to their Russian boys and the widows who married ex-servicemen post-war.

1 in 5 Russians died, a ratio similar to that of Australian sold­iers across the board in WW1. But were Russians totally trusted in Australia? The decision by Aust­ralian soldiers not to question a fellow sold­ier because of some politicians in a distant country of origin was a relaxed attitude that was always cherish­ed.

Some racism continued. Peter Chirvin from Sakhalin fought at Gall­ipoli and on the Western front for 4 years, being wounded twice. Risking his life, he carr­ied the wounded from the battlefield, for which he was awarded the Mil­itary Medal. He returned to Australia on the troop­ship Anchises in 1919, and when soldiers on board ship started abusing him as a dreaded Russian-Orthodox Bolshie, their comm­and­ing off­icers did not intervene. Chirvin committed suicide on the ship, the last Australian victim of WW1.

Favst Leoshkevitch, on the other hand, was a seaman who learned English in the trenches from his Australian mates. After the war he told his son “what wonderful people our army people were just ord­in­ary sol­diers. When the revolution erupted in Russia nobody spoke to me about it and I thought that was wonderful”.

Integrating the Russian Anzacs into Australian life AFTER the war was no easy process either. Just like their Australian-born mates, these men rarely told their families about the horrors of the war. Some of them never spoke about their Russian past to their child­ren, who grew up not speaking Russian with their fathers. This was the case for the daughter of Norman Myer, a lieut­enant on the West­­ern Front and heir to Austral­ia's largest depart­ment store, Myer Emporium. Some of these men had burned all bridges with their homeland. A few returned home to Russia. 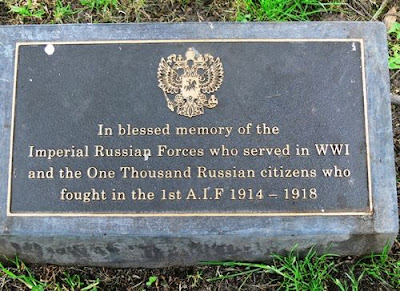 On­ly since the 1917 Revolution has Russia come to be seen as an enemy, rather than a friend of Australia. So we have to ask if each new generation of Australians reinvested the Anzac legend with its own anti-Russian perceptions. Could the many émigré communities be able to fully engage with the nation’s Anzac past? Only now, 100+ years after the Anzac legend started, the true div­ersity behind this national legend now incl­udes Russia's heroic contribution.

During the centenary year of  1918, the Australian War Mem­or­ial is projecting names onto the façade of the Hall of Memory. Every night they recorded the names of all the fallen men, includ­ing the 162 fallen Russian Anzacs. Now the grandchildren of the Russians must preserve the memory of the soldiers. Film-maker Alex Spektor made a documentary, Anzacs from Russia, inspired by Elena Govor. Spektor explained that WW1 in Russia is remembered intensely and tragically, but do the Russians even know that their own citizens were fighting for Australian survival?

Hels when they commemorate the Australian Lighthorse Brigade in Beersheba, are Russian Australians ever mentioned?

Well, this is all news to me Helen. Heroism coupled with tragedy - how sad is that?
What is the Russian presence like in Australia these days. I know it's massive in Israel.
I think Australia is the real New World!
CLICK HERE for Bazza’s powerfully pernicious Blog ‘To Discover Ice’

The Russian Australian soldiers made their important contributions in Gallipoli, and the Somme (on the Western Front). I found no particular mention of these ANZACs in the battle for Beersheba.

It is an amazing story and one that I had never heard of, until Elena Govor's book came out. What is strange about that is that my grandparents spoke, wrote and socialised in Russian.

Most Russians came here between 1912 and 1930, or since 1990. The only difference is that "Russian" used to include every national group. Now we add in Ukrainians, Lithuanians etc separately.

So interesting with some personal family history thrown in to boot. I'm afraid I didn't even know Russians were here in the early 20th century. I assumed the immigration was all post WWII.

Hello Hels, Today many countries are examining their military histories and deciding that many sorts of people were patriotic enough to want to fight for or with their country, and individually and together formed important parts of the fighting forces. I just was reading the autobiography of conductor Walter Damrosch who was born in Germany but who became such a patriotic American that in WWI he worked tirelessly for the Allies. Also, my uncles were born in Eastern Europe, but in WWII all entered the U.S. Army. Especially for Jews, fighting for the Allied cause was the most natural response.
--Jim

so many Russians came to Australia before and after WW1, because Russia was being torn apart by the Russian-Japanese War, the 1905 Revolution and the February Revolution in 1917. They were hard working migrants who had suffered under the Czars and had suffered under compulsory military service at home.

By 1914, some 12,000 people from the Russian empire came (mainly) to Melbourne, keen to be decently paid and attracted by Australia's democracy and social mobility. They integrated well and became very loyal to their new country, as we saw in the blog post.

I think that if new migrants were grateful to the countries that gave them a safe haven and new opportunities for their families, they became excellent citizens. Since Australia didn't have _mandatory conscription_ in WW1, I was quite surprised to see young men from abroad quickly _volunteer_ to join the Australian army.

Re your conductor Walter Damrosch example, I wonder if the process worked in both directions. British Prince Charles Edward's father was Prince Leopold, son of Queen Victoria. He was sent involuntarily to Germany many years before WW1, married happily, and learned to love his new country. When the war broke out in 1914, he proudly accepted a commission as a general in the German Army.