2019: The fabulous year of Rembrandt

From 1639-58 Rembrandt lived and worked in a lovely house, now The Rembrandt House Museum Amsterdam. A contemporary inventory was used as the source for restoring the house with C17th furniture, art and objects. 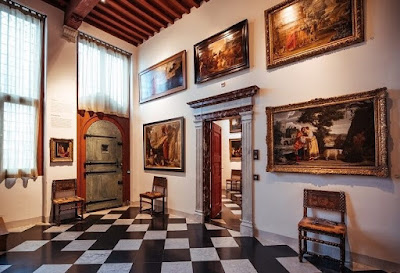 In addition to works by the master himself, Rembrandt House Museum owns a small few paintings by Rembrandt’s teacher, his pupils, contemporaries and  and later artists. From Oct 2017 in this mus­eum there was the Ferdinand Bol and Govert Flinck – Rembrandt’s Master Pupils Exhibition. Many paintings came tog­et­her from museums and private collections all over the world, some of them back in the Dutch capital for the first time since the C17th.

The Leiden Collection, founded in 2003 by New Yorkers Thomas and Daph­ne Kaplan, includes c250 paintings and drawings. This large private collections of C17th Dutch paint­ings was largely int­ro­duced to the public in 2017 through a spec­ial exhib­it­ion at the Louvre. By late 2016, the discovery of a lost early-Rembrandt in the Leiden Coll­ection led to the Rembrandt’s First Painting: The Four Senses Exhibition.

Now two newly rediscovered paintings came to The Rembrandt House Museum in May 2018, recently acquired by the Kaplans. Rembrandt’s Portrait of Petronella Buys (1635) and Man with a Sword (c1642) were painted by Rembrandt and perhaps by a member of his work­shop as well.

First examine his Portrait of Petronella Buys 1635. It burst on the art market at Christie's in London in 2017, following decades of being in hiding. The portrait was sold as a Rembrandt portrait of the wife of Philips Lucasz (d 1641) who was based with the Dutch East India Co./VOC. He rose to become Commissioner Extra­ordinary of the Indies in 1631. 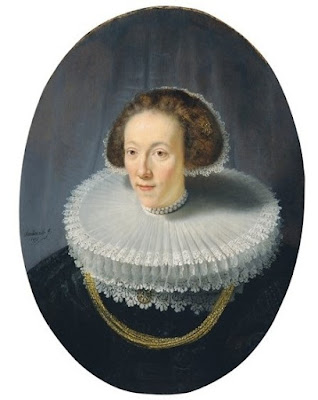 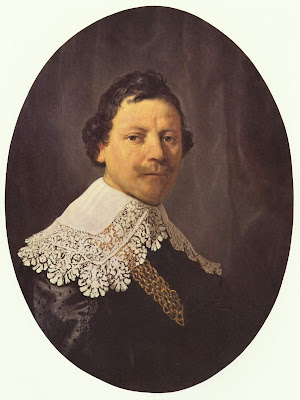 
Petronella had travelled in 1629 with her sister Maria Odilia Buys and brother-in-law Jacques Specx (1588-1652), who was also employed by the VOC. In 1633 Philips commanded a trad­ing fleet returning to Holland, bringing Petronella with him and they mar­r­ied shortly after their arrival at The Hague in Aug 1634. They returned togeth­er to the East Indies in May 1635. But sadly Pet­ronella was widowed six years later when Philips died aboard ship to Cey­lon. She immed­iate­ly returned home to live in Amsterdam, and in Dec 1645 she mar­r­ied her second husband Johan Cardon, Mayor of Vliss­ingen and governor of the VOC. She died in Sept 1670.

Petronella Buys sat for Remb­ran­dt in early 1635. Her portrait and its pendant pair were first documented in the coll­ect­ion of brother-in-law Jacques Specx (d1653) in his post-mortem inventory. Specx had been an important early patron of Rembrandt and the same inventory listed three other paint­ings by the artist. So it was thought that Specx commissioned them himself. On his death, they were inherited by his daughter Maria (1636-1704).

By 1820 the two marital portraits had become separated from each other and it wasn’t until 1913 that they were again recognised as a pair. An old inscription on the back of the present work identified the sit­ter as Petronella Buys and mentioned a companion portrait of her husband. It was discovered by Hofstede de Groot, who found in Philips Lucasz’s National Gallery London picture a portrait that corresp­onded to the details. He also noted that the gold chain worn by Philips alluded to his role in the East India Co., where they gave chain gifts to successful commanders.

The Petronella portrait bore Remb­r­andt’s signature. Yet in 1989 the Rembrandt Research Project suggested that hers was prob­ab­ly painted by an assistant. New resear­ch has suggested that Rem­b­randt painted the work himself, but rath­er more loos­e­ly than norm­al.

Remb­randt clearly took certain shortcuts in her portrait, perh­aps work­ing quickly because the picture had to be finished before Pet­ronella sailed back to Batavia in May 1635. The black in her cost­ume had largely been blocked in, giving a vague sense of the cloth pattern, but little textural detail. The strands of her gold chain had been painted in an abbreviated mann­er, as if applied as an aft­erthought over her black dress to echo her husband’s chain. The painting of her ruff, made up of broad sweeps of white and grey paint with highlights, were quickly applied, but gave a perceptible sense of volume and lightness.

The years 1631-5, Rembrandt’s First Amster­dam Era, was his time of hectic activity. Operating out of the Amst­erdam workshop of Hend­rick Uylenburgh, Rembrandt cornered the portrait mark­et, using his history-painting experience to produce works that were more dynamic than his riv­als’. Rembrandt produced at least 65 port­raits during these years, presumably out of fin­an­cial necessity. The majority of these portraits used oval format panels, in pendant pairs. 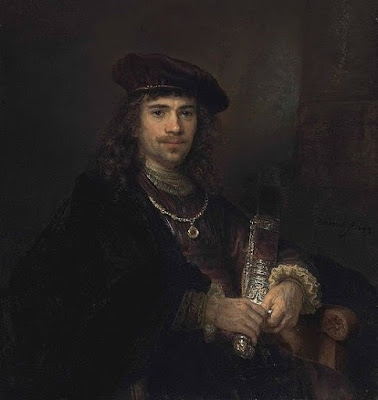 Pet­r­onella was criticised, based on a new exam­in­ation of the pict­ure in 1971 when a “studio assistant” was said to be resp­onsible for the clothing in both portraits. Comparison between the two pic­tures, which had been conducted at the National Gallery, argued against a diff­er­ence in execution between the two portraits. So despite the slightly better state of preservation of the London picture, the two were entirely compatible in style terms. This led the scholars in 2006 to refute the claim of “studio” work; both paintings were entirely painted by Remb­ran­dt.

Finally let me briefly mention Man with a Sword c1642. The Leiden Collection was con­sidered to be a painting by Rembrandt with an excellent prov­en­ance, until scholars questioned the attribution in 1970. Recent research has revealed that Rembr­an­dt both designed and painted the port­rait, but that it was later subjected to changes by one of his pupils in his workshop. While a pupil painted much of the underlying portrait, Rem­brandt’s hand was clearly visible in the rendering of the face, a la his early 1640s work.

The Rijksmuseum is also marking the 350th anniversary of Rembrandt’s death until Jan 2020 with exhibitions celebrating the work of one of the truly great Old Masters.

Hi Hels - I'd love to visit ... one day, I hope. I did give a talk about him ... and was amazed that when he was alive ... it was his etchings and drawings that were much admired. Incredible artist ... and very much admired then and now ... cheers Hilary

Man With a Sword is beautiful, whatever proportion was painted by Rembrandt himself. Silly experts.

I think it's the mark of a good portraitist that they do not flatter their subjects. Rembrandt had the knack of being honest but still showing his subject in (literally) the best light.
CLICK HERE for Bazza’s deliberately devastating Blog ‘To Discover Ice’

Helen recommends you visit Rembrandthuis because a] it was in a particularly lovely part of Amsterdam and b] it represented the patrician status of his lovely wife Saskia and the busy professional life of Rembrandt as an artist, teacher and art dealer. Rembrandt's financial success fell apart after his wife died of TB at 30 and three of his four children died in early childhood.

Helen agrees that Rembrandt experts have to examine works carefully to avoid fraudsters. However in many of the large studio some of the basic work was done by the students and apprentices, leaving the face, clothes and major props for the master. Man with a Sword may have been a perfect example of that process.

it depended on the wealth and status of the portrait commissioner. If Rembrandt wanted to keep the important patronage going, he created serious and handsome portraits, filled with amazing light.

I suppose we have to accept that some things will never be known for sure. How could it really be proved that it is a purely Rembrandt work or was painted in part by an assistant, at the same time using the same paints. It will only ever be educated guesswork.

Hello Hels, The problem is that people force a dichotomy between real and fake, and although both of those extremes exist, it is really a matter of gray areas and discussion, much of it subjective and subject to future revision. The result is more informed judgments about art objects, what we are really seeing, and what those objects can say to us.
--Jim

Helen recommended watching Fake or Fortune? and Britain’s Lost Masterpieces. Some elements of a painting were shown to be easily detectable eg the date of the canvas, the date and the particular mixtures of the oil paints used etc. But some elements (eg the subject matters chosen by the artist) were certainly educated guesswork, voted on by the expert panel after all the evidence was in.

not only what the objects can say to us, but what the artist had in his mind. No doubt artists' proven oeuvres will contract and expand with future scientific analysis and with fakers' admissions.