History of coffee houses in England

Reread the post that was largely concerned the introduction and usage of tea in Britain. Now we analyse the story of coffee in Britain.

Coffeehouses were already popular in Constantinople by 1550 and were called Schools of Wisdom! In 1632 there were 1,000 public coffee houses in Cairo, but the first public cof­f­ee house didn’t open in Venice until 1640, where the mer­chants imp­orted it from Turkey. It seems the Vien­nese didn’t know what to do with the coffee beans they found, after the 1683 siege by Turks, until some bright spark pop­ularised the custom of adding sugar and milk to the coffee. The new drink soon became very pop­u­lar. Soon drinking Viennese-style coffee spread throughout central Europe, and it has been ­famous ever since.

In 1645 coffee-drinking had already become very common in southern It­aly. From Italy, coffee made its way to France where it was intr­o­duced to society in 1650. A Greek named Pasqua created the first coffee house in London 1652 and by 1700, coffee houses were popular across Europe.

By 1714 Vienna had 11 licensed Coffee-Houses. The devel­op­ment of coffee houses in Austria went along with an­ot­h­er innov­ation: in early C18th the first period­ical newspapers appeared, Wien­er Zeitung, which today is the oldest news­paper in the world. Imag­es at the time show the interior of a typ­ical Viennese coffee house. Large tab­les ran down the length of the room with bench seating; pots of cof­f­ee warmed on a large hearth; the hostess distributed nibbles from a front booth and newspapers were everywhere.

The first recorded coffee house in England was in Oxford, open by 1650. The first in London, at the Sign of Pasqua Rosee in St Michael's Alley off Cornhill, was open by 1652. The venture was an immediate success, so much so that large numbers of coffee-houses were established throughout the city. From its simple beginnings in Cornhill, the coffee-house quickly became the centre of social life. 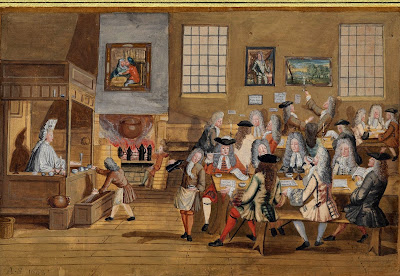 The interior of a London coffee-house
1690s

Examine the interior of a busy coffee-house in late C17th London. Men sat in the candlelight, sharing long wooden benches, drinking coffee, smoking clay pipes and discussing the newspapers. One servant took a bundle of long pipes from a large chest, while another poured dishes of coffee for customers. A maid with a high lace headdress served behind the bar, and a man enjoyed the heat of the fire where the coffeepots were warming. The walls were hung with various notices and paintings, including an advertisement for something stronger than coffee, probably whiskey.

There were soon cof­fee houses for every social class, and every pers­uas­ion of politics, literature and commerce. The Smyrna Coffee House was the meeting place of choice for leading members of the Whig Party, while members of the Tory Party met at the Cocoa-Tree, both in Pall Mall. The Pur­it­an’s Coffee House on Ald­ergate St was useful for its political conversat­ion. Those in rad­ical politics would gather at the Cromwell Coffee House. Trades and professions had their favourite places. Sometimes coffee houses were used for more formal educat­ional activities eg lectures; more commonly they provided a base for clubs and societies, including debating clubs. The first of these was based at Mile’s Coffee House, at the sign of the Turk’s Head in New Palace Yard in 1659. Old Slaughter's Coffee House in St Martin’s Lane attracted artists in 1692.

William Lovett noted that by 1700, a quarter of the 2000 London coffee houses had libraries, some with hundreds or even a thousand volumes. Most of the establishments functioned as read­ing rooms, for the cost of newspapers and pamphlets was included in the admission charge. Bull­etins announcing sales, sailings and auctions covered the walls of the House, providing valuable in­f­ormation to the business man who might have conducted his business from within his favourite coffee-house.

I am a great coffee fan, but I can't see any women in the painting. Apart from the worker.

I wonder if the coffee drunk back then was at all like what we are used to and love now.

me too. I spend a big proportion of my social life at the local espresso bar. But in the 17th century, women didn't seem welcome. In the first instance, coffeehouses were considered as an inappropriate place for any respectable lady. If a woman turned up, she would be seen as a prostitute. Secondly depending on which coffeehouse was being considered, the conversations would be about politics, newspaper articles or overseas trade, which would have automatically excluded women's participation.

I love this response: Contemporaries described coffee as a "syrup of soot" and an "essence of boiled shoes" that "smelled like old crusts and leather" with a mouth-feel akin to "puddle water." But the men were completely enamoured with the caffeine buzz. They lauded its ability to deter drowsiness, enhance memory and suppress the appetite. Most of all, they praised coffee's mood-enhancing qualities. Coffee promised its drinkers all the fun of the tavern without the terrible hangover.

In contrast to today’s rather mundane spawn of coffeehouse chains, the London of the 17th and 18th century was home to an eclectic and thriving coffee drinking scene. Dr Matthew Green explores the halcyon days of the London coffeehouse, a haven for caffeine-fueled debate and innovation which helped to shape the modern world.

The Lost World of the London Coffeehouse by M.Green,
Idler Books, 2013

Many thanks to the Public Domain Review

that is a wonderful post in a journal I didn't know of before.

Of course Lloyds of London started life in the 17th century in a coffee house. My daughter worked in the Lloyds building for a while and she gave me a tour (with special permission. Biggest surprise - the Lutine Bell is tiny!)) And now it's led to Starbucks and Costa!
I love coffee but I become bewildered at the incredible choice one now faces. I can't stand Starbucks and won't go in there. Thanks for the interesting history and of tea as well.
CLICK HERE for Bazza’s abnormally antic Blog ‘To Discover Ice’

I have very fond memories of the old beautiful and worn coffee houses of Vienna .I stumbled across some by accident near the Naschmarkt once . I sat there fro ages just loving the ambience . Thee newspapers were all there .
Today I love a good coffee shop here in Melbourne BUT it must have good papers and magazines or I dont go back !!

nod..it is important to look at the reason a particular institution was created in the first place and then to follow the changes in that institution over the decades or centuries. Starbucks would not have a clue what Pasqua meant by a "penny university where intelligent men read newspapers and discussed politics and business".

By the way, Starbucks didn't fit Australians' tastes apparently. In its first seven years in this country, Starbucks accumulated $105 million in losses, forcing the company to close 61 of its outlets. In Italy, the company may not have even opened any outlets.

I have been writing this history blog for 11 years now and the post called "Vienna: Coffee, Art, Pastries" was the third most popular post I have ever written:
https://melbourneblogger.blogspot.com/2009/01/vienna-coffee-art-pastries.html Many thousands of people agree with you that Vienna had a vital role in the history of coffeehouses, and still have the greatest coffee places now.

By the way, do you remember the first espresso machines EVER installed in Australia, just in time for the 1956 Olympic Games in Melbourne? Pellegrini's Espresso Bar in Bourke St and Leo's Spaghetti Bar in St Kilda. Both Italian :)

Looking at the comments it is interesting to see how times and culture has changed.

So true. Each generation assumes that every innovation was invented in its own time!

My grandson was going to a Boy Scout meeting on Thursday night, saying to me, his granny: "I don't suppose you know what the Scouts are about!" So I patiently explained that the Scouts came out of the Boer War, to teach drilling skills, military bravery and Christian values to lads. Ha ha!