I can recognise and love every one of William Hogarth's (1697-1764) works of art. What I did NOT realise that one of his dogs, Trump (c1730–1745), appeared in a number of his engavings and paintings. Apart from looking ugly, it has been suggested by Hogarth's biographer Ronald Paulson that this dog appeared as an emblem of the artist's own pug-nacious and dog-matic character.

Hogarth was clever and famous for blasting whatever he con­sid­ered to be politically corrupt, vulgar, criminal, charitable and patriotic. The artist was disparagingly nicknamed the Painter Pugg.  But Hogarth continued to use the dog as his trademark in a sat­ir­ic­al 1763 engraving The Bruiser. The image was based on his 1745 self-portrait with Trump, replacing art critic Charles Churchill who was lampooned as a drunken bear. Note the rude dog, urinating on a copy of the “Epistle to William Hogarth”, published by Charles Churchill, archenemy of the painter.

How prescient William Hogarth was!! 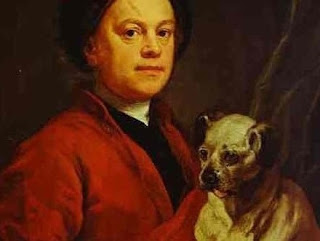 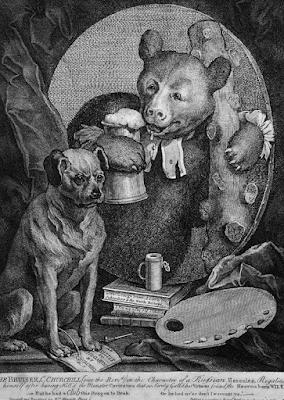 Friedrich Drumpf and Fred Trump left their grandson and son a handsome legacy in business and building. Yet since the beginning of his career, Donald Trump has been, at best, apathetic to the arts in New York and elsewhere. His first media spectacle, in 1980, focused on the then-33-year-old developer destroying a pair of Art Deco reliefs that were part of the facade of the Bonwit Teller Building in midtown Manhattan, which Trump tore down to build his Trump Tower. The Metropolitan Museum of Art wanted the reliefs for its collection and Trump agreed to donate them, if the cost of their removal wasn’t prohibitive. It wasn’t, but Donald Trump’s construction crew destroyed the works anyway. He later told the New York Times that he was concerned for “the safety of people on the street below”.

Later Donald Trump fashioned himself as a philistine par excellence. In 1999 Trump made a public call for censorship and claimed that his hypothetical presidency would cut federal funding for the arts. That was the year that Mayor Rudolph Giuliani embarked on a crusade against the Brooklyn Museum for its exhibition of Chris Ofili’s The Holy Mary Virgin (1996), which depicted the Madonna in ugly materials. Giuliani went so far as to try to cancel the institution’s lease with the city, evicting it from its home of more than 100 years. Only Trump supported the mayor's criticism, releasing a statement to the Daily News that said “As president, I would ensure that the National Endowment of the Arts stops funding of this sort. It’s not art. It’s absolutely gross, degenerate stuff.” Note the word degenerate.

But as a citizen, Donald Trump has had a more tangible effect on the NEA beyond his mere endorsement of slashing government funding for the arts. In 2013, Trump took over the lease of the Old Post Office on Pennsylvania Ave in Washington DC, in order to build a private 270-room hotel. Among the occupants that were forced to vacate were the National Endowment for the Arts and the National Endowment for the Humanities.

Donald took the name of his grandfather Friedrich Drumpf, not the name of Hogarth's dog. But cute link :)

Hello Hels, Irony, parody and censure seem to have no effect on current U.S. politics. Those against him need no new evidence, no matter how frequently, dramatically and damning it is forthcoming, while the "supporters," motivated seemingly only by personal gain or raging hatred, are past being swayed.
--Jim

Hogarth's was the best example of satirical caricature, I think. We need him now.

You are quite right. I will add a link to his father and grandfather.

it is always stated that Americans in general don't use irony themselves and don't understand irony when other people use it. Of course irony or parody won't have much influence in political understanding, as you say. But that situation may be true in film, art and literature as well.

the Tate says: Hogarth cleverly refined a pre-existing tradition of visual satire, taking it to new heights of sophistication. He placed visual satire shoulder to shoulder with the textual satire of the times. But he also established a journalistic tradition that’s still flourishing today.

I think we would have agreed with that in our lecture course. Clever bloke!!

Hello again, Political talk seems to drain all levity, even though my favorite form of wit, either verbal or artistic, is that which punctures pretension or ironically exposes moral and other foibles.

I never even commented on the main point of your post, the brilliancy of William Hogarth. I remember my delight in visiting the Soane house in London and unexpectedly encountering the original Hogarth oils of A Rake's Progress--an experience that could only have been improved on by the fact they had been Beckford's! The British archaeologist Ivor Noel Hume often used Hogarth's paintings with their intricate and accurate detail to document and explain archaeological finds, about which he writes so entertainingly in his books.
--Jim

Hi Hels - I don't even want to discuss the two legged version of Hogarth's dog ...but what an amazing co-incidence ... Interesting Friedrich made some of his money operating brothels in the Klondike Gold Rush - that rings true too. He also ... lost his citizenship of Bavaria as when he returned to Germany it was established he'd left originally to avoid military service - another co-incidence.

Hogarth is brilliant ... but your post and the comments are fascinating to read - thank you ... cheers Hilary

It's never happened before but this post has left me feeling very sad! The Hogarth story at the beginning was lovely to read but, having just seen Trump on TV talking about the White House staffer who denounced his Presidency, I noticed what a perfect example of Narcissistic Personality Disorder he is. How sad; how dangerous he is!
CLICK HERE for Bazza’s floccinaucinihilipilificatious Blog ‘To Discover Ice’

We in Melbourne have a wonderful legacy in many areas of the arts because we had a state leader in the 1970s who was interested in and supported the arts. Hamer's government has long gone and he is dead, but we are still reaping the rewards from his efforts and patronage.

I am delighted you saw the Soane collection, to understand the breadth and depth of Hogarth's interests. Years ago I saw the exhibition at the Tate Modern, and was very impressed.

He was always understood to be talented, even in his own time, but I wonder if the subjects of Hogarth's satires (aristocrats, clerics, gin drinkers etc) were happy being depicted in public as fools. Probably not.

Hogarth would have had a field day, had he been satirising Friedrich Drumpf and other business men and industrialists of the later 19th century. Those men brutally exploited their workers, made huge personal fortunes and didn't pay taxes.

Perhaps the satirist succeeds best when society is at its worse.

every outburst of vitriol that pours out of Trump's mouth reduces him to a boorish savage and reduces the quality of the recipients' lives - LeBron James, Omarosa, Hilary Clinton, President Obama, Justin Trudeau, James Comey etc etc.

If the children at school would have used language like Trump's, they would have been expelled for bullying and intimidation.

Rupert Hamer was an absolute hero. Yes he was a conservative premier (1972-81), but from the centre, not from the hard right. Certainly the Arts Precinct was thought of earlier, but the new theatres, the ballet in the State Theatre and the Concert Hall were warmly funded and supported by Hamer.

He helped changed Melbourne into the World's Most Livable City.

Hogarth was himself Hogarthian. His self-portrait of 1745 shows a jowly, combative Englishman. In the foreground he depicted his pug dog, Trump, also jowly and combative. The likeness between Hogarth and his dog did not escape the notice of the painter's enemies. The satirist was, in turn, satirized in a vitriolic caricature, probably by Paul Sandby, a rival. Titled "Pugg's Graces," the drawing showed Hogarth with the hind legs of a dog. Beneath the print appeared an equally scurrilous rhyme.

many thanks. I will have to look up Pugg's Graces. Satire works both ways, doesn't it?

Well hopefully the people of the US will be getting the powerful message that they had better get out and VOTE to get rid of this appalling specimen . I keep myself sane by ignoring him or by listening and watching the amazing number of satirical programs which have grown up since his election . I think Pence might be more dangerous though as he apparently believes that he is there by Gods will to save the world from Trump and when you actually look at his values they are terrifying too. but he wouldn't be as in your face as the Trumpster and therefore more dangerous. The USA needs to have a good long look at itself as do all of us . after all dont we on the whole get the government we deserve ??

I am very ambivalent about your last sentence. Perón was democratically elected president of Argentina in 1946 with 56% of the popular vote. He only eliminated constitutional liberties later on. And the legislature in Cambodia was to be popularly elected for a five-year term, but the only election was held (1976) and even that with limited participation.

What might happen in the USA if Trump banned further elections and made himself President for life? Or only gave the vote to property owners? We all shudder to think :(

Well i guess that in order to get good government we need to be engaged and THINKING of which there seems to be a limited amount going on at the moment . I take your point though . What pip me is the way we humans have a way of believing what we WANT to believe and not look at the evidence in front of us .

agreed. A voter doesn't need a PhD in political science to understand the electoral system and to analyse the candidates' suitability. Yet many normally functioning humans do have a way of believing whatever they want to believe and to ignore the perfectly visible evidence.

The American Sociological Review interviewed Trump voters. The study showed that even when voters KNEW a candidate was untruthful, they could still view that candidate as an authentic champion of constituency; that the candidate could be authentically appealing.