Londoner Joseph Henry Maiden (1859-1925) sailed to Australia in 1880. He was soon appointed first curator of the Technological Mus­eum in Sydney, remaining there until 1896, focusing on native plants. After his first collection of plants were destroyed in a fire at the Garden Palace near Sydney Botanic Gardens in 1882, he amassed a new collection, which was housed in part of a new exhibition hall. This collection formed the basis for his first book, Useful Native Plants of Australia (1889), crediting the contribution of Ferdinand von Mueller. In 1896, Maiden was appointed Government Botanist and Director of the Botanic Gardens in Sydney, ably assisted, as we'll see, by Margaret Flockton.

Louise Wilson's book Margaret Flockton: Fragrant Memory (published by Wakefield Press, 2016) tells that Margaret Flockton (1861–1953) grew up in England amidst a very arty family. She formally trained in art and lithography at the National Art Training School in South Kensington.

She arrived in Australia from Britain in 1888 and lived in a suburb overlooking beautiful Sydney Harb­our. Her first regular employment was as commercial lithographer for a comm­ercial publishing firm in Sydney. Then in Charters Towers in Queensland where Margaret conducted art classes and her sister Phoebe contributed to a classic text book on Queensland's geology. Go sisters!!

Back in Sydney Margaret taught art, joined the Roy­al Art Society, opened a studio in Castlereagh St and ex­hib­ited her work at the Royal Art Society from 1894-1901.

Having established her reput­at­ion as a quality lithographer in Aus­tralia, Margaret wanted work that was more creative, more art­ist­ic, more personal. So she was delight­ed to work with Joseph Maiden in 1901, as mentioned. In the 27 years that middle aged Margaret Flock­ton (aged 40-67) spent as resident artist at the Herbarium of the Syd­ney Bot­an­ic Gardens, she produced nearly 1000 beautiful and det­ailed drawings of Australian specimens. Maiden’s key works such as Forest Flora of NSW (1904) and A Census of New South Wales Plants (1916) relied on Margaret’s gift as a scientific illustrator and botanic artist.

Her own booklet, Australian Wild Flowers, came out in 1904 and included 12 paintings previously only offered as posters. The timing was perfect - Australian Federation (1/1/1901) was still being celebrated exuberantly, via pictures of Australian cities, landscapes and unique flora and fauna. And Flockton's own reputation could be enhanced outside Sydney, once the booklet was sold in famous Melbourne bookshops like George Robertson and Co. 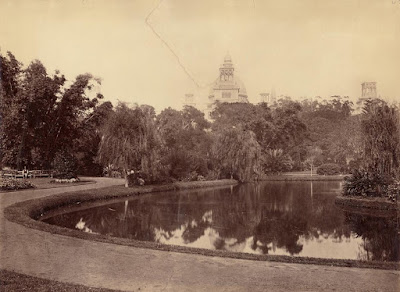 Sydney Botanic Gardens
with the Garden Palace in the background
c1880s.

It was very scientific. Wilson discussed how her great aunt analysed her specimens through a camera lucida, a micro­scope with mirrors that allowed her to trace the object she was view­ing. Thus her style was recognisable by her careful observ­at­ion, accurate eye and a very elegant display. Fortunately the Margaret Flockton Archive has the images that combine sensit­ive and perfect pencil drawings of a species, with watercolour fruits or floral details. Pressed plants, complete with botanic and collection details, are well stored.

As you can see from the floral images beautifully reproduced in the book, the creativity flowed. Between working with various botanical collect­ions and a stream of commercial work outside the Gardens, Margaret was a very happy woman. The National Gallery of NSW selected her work to be included in a display of Women’s Work in Melbourne's stunning Exhibition Building in 1907!

But important issues were raised in the book that questioned that happiness. Firstly there was a struggle between the females working for Joseph Henry Maiden for his scholarly and ?personal approval. That must have made life tricky for all the women. Secondly Margaret received a mis­erable salary before WW1. Even during the war years, when her salary slowly increased, she remained well below that of a man doing the same work. Thirdly in the eyes of the Public Service Board, Margar­et’s advanced skills and knowledge still had not lifted her to the ranks of the professionals. 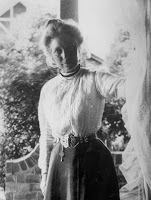 I was very interested to read about Marian Ellis Rowan, a skilled Australian botanical artist much loved in this blog. Clearly Rowan was unknowingly being drawn into the competition for Maiden’s approval by Flockton’s main female competitor.

After she died in 1953, Margaret Flockton’s name faded, even in the world of botanical scholarship. Then the Botanic Garden re-discovered and re-promoted her work. On Inter­national Women’s Day in March 2003 hundreds of elegant botanical studies in watercolour inspired the Garden’s illustrators and bot­an­ists. How appropriate that Margaret’s art works were seen in the Joseph Maiden Theatre.

Much has happened since that 2003 presentation. Flock­ton’s name appears on a very successful annual internat­ional award for excellence in scientific botanical illustration, sponsored by the Foundation and Friends of the Botanic Gardens. Thousands now attend the annual exhibition and award ceremony. Flockton would have been delighted when Lucy T Smith, an Australian who works for Kew Gardens as a botanical illustrator, won the 2014 Margaret Flockton Award. 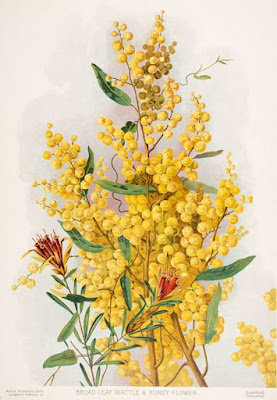 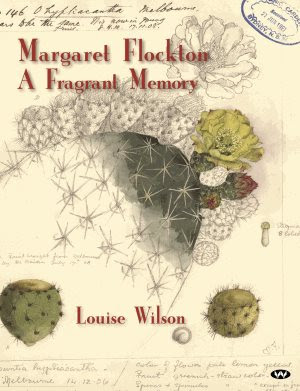 Although there were many family photos in the book, few individual portraits of the adult Margaret were taken, or survived. Was she shy? or unhappy with her own image?

I am very grateful to Louise Wilson; her book goes a long way to change the belief that a spinster’s life was lonely and unproductive, even after the sexist Victorian era moved into the sacrifices of WW1. As it turned out with many successful women artists of the Victorian era and on, Flockton was single and childfree specifically so that no husband would limit the time and emotional commitment that she wanted to devote to her art career. But it wasn't easy.

She must have been a strong woman. Living alone and having a limited income could not have been easy.

do you think we can sensibly compare the life and art of Marian Ellis Rowan with Margaret Flockton's? I read the Rowan post ages ago (but there seems to be a typo).

Hello Hels, I just checked out some other Flockton botanical art. She has real style in addition to botanical accuracy. I collect old botanical manuals and too often we use or appreciate the old drawings without thinking about the enormous dedication and artistic skill that went into the old drawings, apparently often at slave wages. Often the illustrators were different from the author of a book, a fact glossed over on the title page or in the preface.

There were huge publishing efforts in every area of natural history, but now the problem is that the colored drawings are appreciated perhaps too much, so many important volumes are broken up in order to provide frameable and salable illustrations.
--Jim

there was a ton of family life close at hand - parents, two sisters, nieces and nephews, visiting aunties and cousins from the UK, shared family homes and housekeepers. But I wonder in the middle of the night whether Margaret would have liked to share the quiet moments with one special husband, rather than a noisy horde. Perhaps she shared her reflective moments in her beloved Church of England congregation.

good to see you :) Marion Ellis was delighted to marry Frederic Rowan, a British Army officer so she was probably much freer than Margaret Flockton. Although she tragically lost her husband and only son at an early age, Rowan travelled at the drop of a hat, working and exhibiting in international exhibitions in Australia, New Zealand and New Guinea; India; Europe and Britain; and the USA. Even after she died, Rowan's reputation remained high and her works were happily taken up by the National Library of Australia and the Queensland Museum.

you must have the most amazing collections in your home, including old botanical manuals. Goodonya, as we say in Australia.

You are of course spot on regarding the breaking up of many important volumes throughout the history of book illustration, in order to hang individual works of art on the wall. I suppose that was the cost of considering oneself a botanical artist, rather than an academic scientist.

Many thanks for your coverage of my book 'Margaret Flockton: A Fragrant Memory'. You've admirably handled both the topic and the follow-up comments on this page.

Re your readers' interest in Margaret's age-peer Ellis Rowan, there's a chapter in the book which explains how Sarah (Sally) Hynes, the botanist who Maiden 'moved on' from the RBG Sydney, became the 'marketing department' for Ellis Rowan.

An observer of their times commented that there are two distinct forms of wildflower painting - the strictly botanical, Margaret Flockton being the greatest Australian exponent, and the ordinary 'flower study' (his term), at which Ellis Rowan excelled.

After studying the topic at length, I concluded this: had Margaret Flockton been championed in art & society circles like Ellis Rowan was, her beautiful scientific work may have been better accepted as works of art - and had Ellis Rowan labelled her colourful paintings with their botanical names, they might have earned a permanent place in scientific circles.

I had struggled a bit with the difference between the two distinct forms of wildflower painting - the strictly botanical (a la Margaret Flockton) and the ordinary arty flower study (a la Ellis Rowan). So thank you. Otherwise the two women's careers may well have turned out differently.

Here is another botanical artist. "Truth and Beauty: The Australian Botanical Works of Ferdinand Bauer" is an exhibition at the Flinders University City Gallery, State Library of South Australia until 5/2/2017.

During 1802-4, under the command of Capt Matthew Flinders, the HMS Investigator was the first ship to circumnavigate Australia. Bauer was one of the scientific gentlemen on board and during the voyage, he produced intricately detailed images of 2000+ plants and animals. Meticulous in detail and delicate in resolve, his work is of enduring scientific significance and aesthetic appeal.

many thanks. I looked up Ferdinand Bauer's published works and was amazed at both the quality and the quantity of his Australian botany. For an Austrian artist who worked in Britain and loved capturing Australian plants, Bauer left behind a wonderful visual record of his trip; he got off the ship with 11 cases of drawings.

This is a very interesting post. I did not know about Margaret Flockton before today.

I did Australian history in primary school, but not in high school or uni. Despite studying history and art history, I too rely on blogs, conference papers and books like Ms Wilson's.

An interesting read, thank you :-)

You never know when accepting a book to review will turn out well or not. But so far so good. As long as people know what my limitations are (travel, the arts, history, architecture), I have read a wider range of books than I would have normally selected myself.