The tradition of court dress in England was first documented in the reign of King Edward III (1327-77). At the time, a long robe, cowl and cloak became standard dress for attending the royal court. The material for the robes, ermine, taffeta and silk, was given to judges in the form of a grant from the crown. The colours were violet in winter, green in summer, and scarlet for best. However it was not until 1635 that a formal guide to court dress was published in the Judges’ Rules i.e which robes, lace jabots and wigs should be worn.

Regarding wigs in court, lawyers were expected to appear in court with clean, short hair and beards until the C17th. Wigs made their first appearance in a courtroom simply because that’s what was being worn in fashionable circles; the reign of King Charles II (1660-1685) made wigs essential wear for polite society. The judiciary, however, took some time to convince; portraits of judges from the early 1680s showed judges defiantly sporting their own natural hair. Wigs did not seem to have been adopted wholesale until many years after the Judges’ Rules were published.

The Courts and Tribunals Judiciary documents are full of inform­ation, but I cannot see why wigs were mandated for judges and barristers. Yes wigs were worn inside the court room because that was the headgear that was being worn outside it, especially in France. Consider two trends. Firstly the reign of France’s King Louis XIV (1643-1715) was powerful. All his court was known to use wigs, and as France set the fashions across Europe, the use of wigs spread to all Europ­ean courts. It was said that King Louis had 40 wig makers designing his wigs at Versailles! Secondly with the restoration of the British monarchy and of British pride, the reign of King Charles II (1660-1685) made wigs essential wear for polite society. Charles was going to set trends for his own nation, not blindly follow continental fashions. 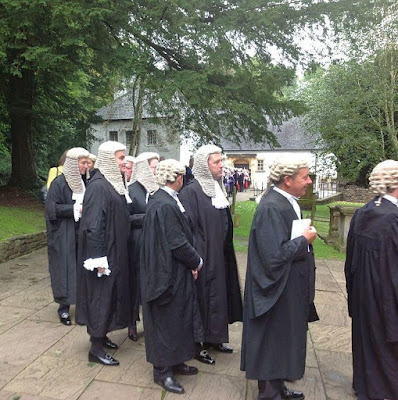 I think fashionable French style DID create the idea in the first place, but British judges were more pragmatic than that. Wigs became popular because unhygienic conditions in the C17th meant that hair attracted a lot of head lice. Artificial headpieces could be more easily de-loused. And for older men, with thinning white hair or no hair at all, well groomed wigs may have made the judges look younger, healthier and more judicious. Worst of all syphilis caused open sores, nasty rashes and patchy hair loss. No judge wanted his genital diseases to be discussed in public.

And another important thing to consider. In criminal courts in particular, the wig took on important symbolic power; it represented authority, gravitas and a concern for community security, and it put the fear of god into the miscreant in the dock. Perhaps wigs also gave the judges some anonymity, making them harder to identify in public.

King George III's reign (1760-1820) saw wigs gradually go out of fashion. By the end of the century they were worn by bish­ops, coachmen, parliamentary officials and the legal profession – and even bishops soon got permission to discard them. Judges wore only full-bottomed wigs until the 1780s; then the less formal, smaller bob-wig with a short tail at the back but no curls, was adopted for civil trials. The full-bottomed wig continued to be used for criminal trials until the 1840s, but is now reserved for ceremonial dress; smaller wigs are used on a day-to-day basis in criminal courts.

Fashions come and fashions go. And to show that judges’ wigs were not just a fashion statement, consider what happened in the late C18th when the wig fashion was dying out. French citizens stopped buying wigs during the French Revolution (1789–1799), and British citizens stopped wearing wigs after William Pitt taxed hair powder from 1795 on. By the new century, judges and barristers were virtually the only men in Britain wearing wigs.


Sometimes changes to the court structure itself had a major effect on what was worn by British judges. The High Court, for example, was created by Acts in 1873-5, absorbing the courts of Chancery, Admiralty, Probate and Matrimonial Causes. This led to a new dress dilemma since trial judges in these courts were used to wearing plain black silk gowns. These judges were allowed to keep the familiar dress code, and thus black silk gowns are still worn by judges in many courts today.

By the end of WW2, I am assuming the ordinary citizen felt that judicial wigs were old fashioned, pompous, intimidating and out of touch with the modern world.

In April 2008 British criminal barristers were told to keep wearing wigs and special gowns because the Lord Chief Justice approved of the existing dress standards. Formality and robes were required, he said, because there was strong identif­ic­ation with the Bar of England and Wales on one hand, and its formal dress on the other. At least in the public's mind. For the most part, changes would only affect what would be worn by judges in civil courts - a simplified robe and no wig.

Almost all British Commonwealth countries adopted British court outfits, before and after winning national sovereignty. In the High Court of Australia, for example, justices have not worn wigs, collars, bands or lace jabots at the neck or bar jackets since 1988. Except for ceremonial occasions. Strangely enough, judges of the Family Court of Australia (where informality might be most welcomed) still wear a black silk gown, a bar jacket with bands or a lace jabot, and a bench wig. In New Zealand, court dress was greatly simplified in 1996 and wigs have only been worn, since that date, for ceremonial occasions eg the state opening of Parliament. In Canada, different provinces ended the use of judicial wigs at different times, the last province in 2008.

Hello Hels, Thank you for this history of the British use of wigs in court. Since America does not follow this custom (at least since wigs were the standard for general fashion), the British ones now seem kind of strange. Despite their anti-louse efficiency, wigs must have still been uncomfortable, as witnessed by special wig scratchers, like back scratchers, little hands on sticks, except that for wigs the fingers were short and unbent, to aid in going between the wig and the scalp.

I wonder if young British people headed for the judiciary these days dread the embarrassment or look forward to the rank and dignity of their first donning of the wig.
--Jim

It must have cost young barristers a fortune to outfit themselves properly. How many places in Australia were approved to sell the special robes, wigs and every other thing?

I recall that while NSW got rid of wigs, here in Victoria they are optional and still worn. Surely they are now a device to intimidate the poor and the poorly educated, that of late don't seem to working terribly well.

And young Muslim men do not seem particularly intimidated by wigged or wiggless judiciary with with a case of extreme disrespect shown to a female judge by a Muslim youth. 'I will not bow before a woman'.

good question. I asked some of my barrister friends what they thought of the wigs. Since my contemporaries were hippies in the mid 1960s, I assumed there would be a universal loathing of those old fashioned pieces of legal grandstanding now. But no.... half thought the horse hair wigs lent dignity to contentious and nasty court situations.

The other half thought the wigs looked really silly, although the black robes were seen as dignified by everyone.

I found Ludlow's Legal Regalia and Tailors in both Melbourne and Sydney. They say their horsehair wigs are light and cool, and are especially suitable for the Southern Hemisphere heat. However they still recommend recommend that barristers book their wigs for cleaning and maintenance at least once every year. The most expensive is the Full Bottomed Wig for $4,000.

the Victoria Law Foundation has a wonderful document at:
http://www.victorialawfoundation.org.au/sites/default/files/resources/Wigs_and_Robes.pdf

Our timing is perfect! The first line says "From 1 May 2016, judges in the Supreme Court of Victoria will no longer wear wigs." The arguments for and against formal court attire are laid out in detail.

I don't know of that particular case, but I imagine there may be a general lack of respect for women judges/barristers, whether they are wearing a judge's wig, a formal hat or a plastic bag.

I would REALLY not like some snotty teenage boy being rude and sexist in court, if I was the female judge. Whether he was Muslim or not.

By the way, Joan Rosanove became the first woman to sign the Bar Roll in Victoria in 1923. She left the Bar in 1925 because no-one would give her chambers, and didn't become a prominent barrister back at the bar again until 1949!

Hel, dignity is always important, I would say.

All University of South Australia graduands participating in a ceremony are required to wear the appropriate academic dress for their award. Please ensure you obtain the correct type of gown, hood and mortarboard. If you arrive at your graduation ceremony with the incorrect academic dress items you will not be permitted to wear these at the ceremony. A mortarboard must be worn as part of academic dress for all awards except for PhDs and Professional Doctorates who wear a bonnet. This should be kept in mind when planning your hair style.

*nod* although a university graduation ceremony is not as powerful as a supreme or high court, the institution (in this case the University of South Australia) seems just as worried about its significance on the world stage. Mind you, I did find the university's statements "Neat, business attire is most appropriate, with a shirt and tie recommended for male graduates. Jeans are best avoided" just a little self aggrandising.

Hello again, I am currently reading the 1885 novel Diana of the Crossways, by George Meredith. When the maid Danvers (no apparent relation to Mrs. Danvers) will have to appear in Diana's infidelity trial, she says, "No, ma'am! they'll get nothing out of me, and their wigs won't frighten me." Diana responds, "It is usually their baldness that is most frightening." Later, Danvers describes the gossiping head servants at another house, "as though they had been interrogating bigwigs."

Funny how opening up a subject will immediately produce other references to it.
--Jim

*nod* opening up a subject will alert your mind to something new and then you will immediately notice other references to it, references that might have gone over your head a week earlier.

I was at a conference in Sydney last weekend and heard an excellent paper about a series of war trials that started in 1950. I took notes, covering at least four men I had _never_ heard of before.

On arriving home in Melbourne yesterday, I turned on the computer and found a review of a brand new book published about one of those four infamous cases mentioned at the Sydney conference. It is a great book, but I would never have even glanced at it before the conference.

Shop Lori's Wigsite for a great selection of top name brand wigs. Browse our fabulous selection of high quality wigs made with the best cap constructions by the most popular wig brands.