Most readers of this blog know I love travelling every winter (July); I spend the time exploring and photographing churches, synagogues, concert halls, art galleries and other cultural edifices. I might spend one day per year admiring mountains and lakes, but one day of nature is enough!

My absolute passion is to examine café culture of the late 19th and early 20th centuries. Examine The Blue Train in Paris; Ritz and Escoffier;  Les Deux Garcons which was Cezanne and Zola's favourite brasserie in Aix-en-Provence; Lyons Tea Rooms;  The Four Cats Restaurant in Barcelona; and every other place I can inspect.

Now consider London. A small restaurant, The Ivy, was opened by Abel Giandellini in 1917 as an unlicensed Italian café in London. The restaur­ant expanded into the current West St premises in 1929 and was run by the same owner.

Giandellini selected both the location and the late closing time carefully. The Ivy was sited on a corner position in the heart of London's theatre land. And the closing time enabled clients of the nearby theatres to dine and drink after the shows finished. These were two very smart decisions. Over the decades, it has remained a favourite of acting stars and other celebrities. Customers enjoyed spotting stars at leisure eg Laurence Olivier, Vivien Leigh and Marlene Dietrich. 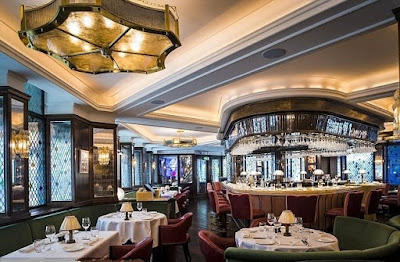 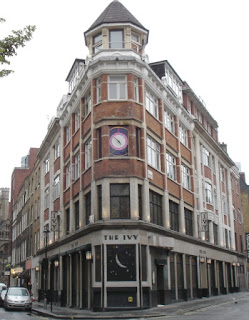 After WW2 the restaurant changed hands a number of times and was renov­ated once. Then in January 2015 this famous celebrity restaurant closed again, for a major renovation. The designer wanted to retain those elements that were the essence of the past interior, such as the harlequin stained glass windows and the specially commissioned British artwork. But the central bar, which acts as a theatrical centrepiece, is now vastly different. And the tiny bar, partitioned off at the entrance, no longer exists.

The Den, on Ivy’s second floor, rediscovered luxury - silk ottomans, dramatic high backed armchairs, an opulent mirror bar and velvet turquoise draping. Customers walk straight into the main dining room, which is much lighter, with a clear view of the famous stained-glass windows along both sides and a 20-seater, coral-coloured onyx bar for dining at the centre. And note the ivory leather-upholstered stools. Its famous harlequin stained glass windows remain, with the addition of mirrored panels, but almost everything else has been replaced.

A separate dining room, which has its own bar flanked by ivory leather stools, offers a range of table arrangements for more private events. Above the bar, hand-hammered brass tiles create a stunning decorative element, illuminated by bespoke lamps featuring glass shades filled with Lalique designs. Bar stools upholstered in red leather and pink mohair are the final, opulent touches.

Even post-renovation, the food is still not elaborate. But since I don’t eat meat, the Ivy hamburger and Shepherd's pie will have to be judged by other visitors. 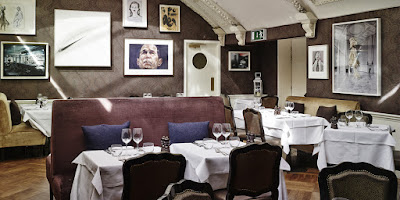 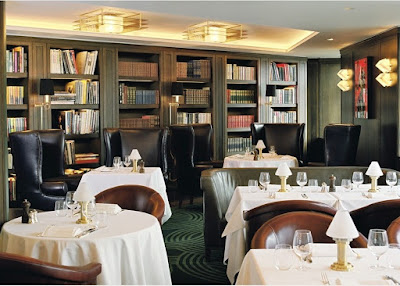 In Sept 2008 The Club at The Ivy, a private members' club with a discreet entrance, was opened above the restaurant. Housing an impressive collection of young and established British artists’ works, the design of the club was based on the 1930s style of the Ivy restaurant on the ground and 1st floor. Martin Brudnizki took timber panelling through the 2nd and 3rd floors and created a more contemporary interior for the 4th floor.

This private club, where membership is by invitation only, seems to have many members who work in the arts. The Art Deco inspired Club enjoys a piano lounge; a drawing room open for breakfast, lunch and dinner; a wood-panelled library "of books that reflect many of our members’ interests in art, literature, film, theatre, architecture and design"; and a cinema room. Thank goodness mobile phones and cameras are not allowed. 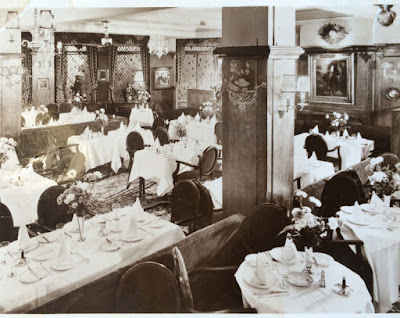 The Ivy 1933
Note the wood panelling, leaden lattice windows and neo-classical statues
And the tables were packed in closely.

I'll never go to any of these places, so I do really appreciate your stories about them.

I had lots of fun at Le Train Bleu because it is evocative of Gare de Lyon railway station and luxury rain travel at the turn of the century. I like the look of The Ivy but Train Bleu is unique.

the very best bit about blogging is reading about places we have not been to, or books we have not read. There was no way I would have got to The Deux Garçons in Aix, had I not read about it in a blog.

Le Train Bleu is _truly_ amazing. The mass of paintings on the ceilings and walls, surrounded by stucco'd carvings, are to replicate the gorgeousness of Buffet de la Gare de Lyon in Paris which first opened in 1901. But is this French restaurant just a little over the top now?

The Ivy is plush and knee deep in leather, but not over the top.

Hello Hels, Overall, this looks like a nice restoration, though perhaps a little bit over-done (I suppose not necessarily the worst case for a restaurant where food is to be consumed!). I am now curious to know what the spaces looked like before, especially the main bar, whose current incarnation looks like it strayed to the glitzy side.
--Jim

Every renovation in history has faced the same dilemma. Do we rebuild and redecorate exactly as it was on the first day the place opened? Do we reflect some aspect of each of the renovations since 1917? Or do we recreate something modern, perhaps with a salute to a previous incarnation?

I found a 1933 postcard that gives us a bit of a feel for the glory days of London's theatre land. What do you think?

If you're ever in London again, if highly recommend one of my friend Yannick's Art Deco walks. I think you'd love them!

I haven't been to the Ivy yet but I've heard it is absolutely lovely.

Thank you! I am in London every second winter (June-July).

I adore Art Deco and have found many wonderful buildings in my life time of travels, but not as often in the UK as I would have liked. There are stunningly beautiful homes on the south coastal cities in Devon, Cornwall and East Sussex, photographed in my various blog posts over the years. But Yannick's walks will be a revelation. The Daimler Garage, for example, looks stunning.

It is indeed. I'd definitely recommend the original Bloomsbury tour which features the garage but yhou might also like the new West End tour which features garages and cinemas. Here is his booking page, if that helps: http://www.eventbrite.co.uk/o/yannick-pucci-2713506508

I saw a review of London's most historic eateries in discoverbritainmag.com
As well as raving about the Ivy in Covent Garden, Heidi Finnane also loved Rules in Maiden Lane in London. It was established in 1798 as an luxurious oyster bar.

Hi Hels! I've walked past Rules many a time but never been in. I think I shall have to remedy that and suggest thathat Stephen and I go there in December for a post-qualification celebration.

I hope you're well! I miss the blogging world so much and hope to make some sort of return next year.