Even before anyone had heard the name, “Fauvism” seemed to be inspired by the French post-Impressionists of the late 1890s: Paul Gauguin, Paul Cézanne and Vincent van Gogh. These three artists loved using colour and tended to give an individual/emotional response to nature.

The Fauvists/Wild Beasts were a loosely connected group of French painters who agreed that their style valued individual expression above other artistic priorities. They valued colour in its own right and were happy to separate colour from the role Nature had given it. And they valued simplified and unified forms that drew attention to the innate flatness of the canvas.

Examine the loose brushwork and unfinished feel to the painting Woman in a Hat 1905. I am assuming Matisse chose these bright, non-naturalistic colours with a clear goal: to convey emotion. Did he care that people were shocked? Probably not. In any case the south of France was the perfect place for him to capture the strong natural light for his landscapes.

Maurice de Vlaminck had no intention of making art his career; instead he joined the French army. It was on holidays from his army job at Chatou in 1900 that he met the artist Andre Derain. Vlaminck and Derain loved working together, and loved going to art exhibitions together. In 1901 they both visited a Vincent van Gogh show in Paris and decided to model themselves on van Gogh's energetic strokes and strong palette. And they both decided that Gauguin's style and colour would make Chatou live on forever.

In 1905, Derain accompanied Matisse to the south of France. Here, in the small fishing port of Collioure, both artists created bright and strong canvases. In these works they sought to express the loveliness and relaxed nature of life along the Mediterranean. 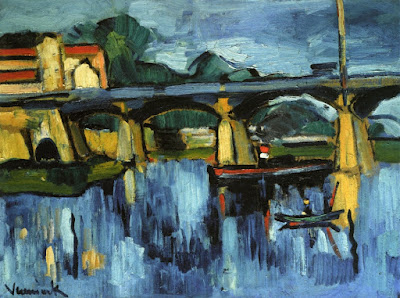 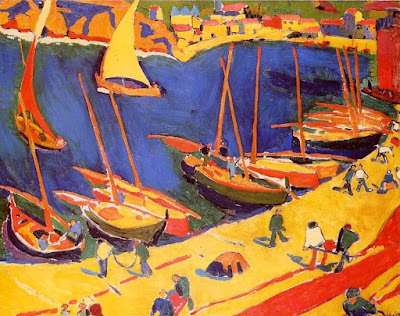 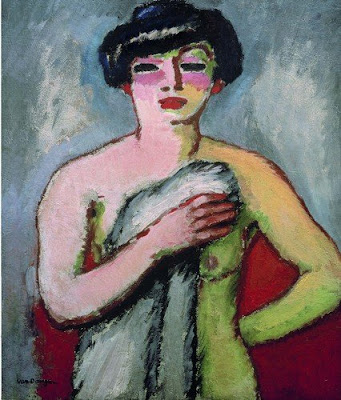 Timing was everything! In 1905 the Salon d'Automne exhibition opened at the Petit Palais des Champs-Élysées in Paris. The Fauvists’ highly innovative paintings were exhibited in this show and they were joined by other like-minded artists. It was through this exhibition that the group received their pejorative name, when the art critic Louis Vauxcelles sniggered at les fauves/wild beasts. He was very rude about their brush strokes, and their unnatural colour.

Of Matisse, Vlaminck and Derain, it was probably Vlaminck who was the most flamboyant eg Bridge at Chatou 1906 and The River Seine at Chatou 1906. Like Flemish artists before him, Vlaminck did landscapes that emphasised the rural skies and rugged land. Viewers were not sure how to react. His first single-artist exhibition in 1907 at Gallery Vollard was both successful and scandalous. Yet something made Vlaminck abandon these bold colours for more subtle and subdued colours, and more organised landscapes.

Dutchman Cornelius Kees van Dongen 1877-1968 studied at the Rotterdam Academy of Fine Arts. He visited Paris in 1897, moved to Montmartre two years later, and married an artist/model. He met Derain and Vlaminck in 1904, and quickly threw his lot in with the Fauvists. Examine his Fauvist painting La Belle Fernande Olivier 1905, the woman who was Picasso's lover and van Dongen's model. Apparently van Dongen loved the many seedy hangouts in Paris, and painted dancers, models, strippers and prostitutes.

The expanding group of Fauves (all based in France) eventually included Georges Rouault, Kees van Dongen, Georges Braque and Raoul Dufy. They travelled together, shared studios and exchanged art ideas. For each of them, composition was built up through the placement of colour, rather than through visuals perspectives.

And despite initial hostility from critics, many of these Fauves enjoyed commercial success following the Salon d'Automne exhibition of 1905. Once the major art buyers started adding Fauvist works to their collections, their paintings were featured in exhibits held over the following years, notably at the Salon des Indépendants in 1907, where the main attraction was the so-called Fauves' Den.

Fortunately for us, Matisse's Notes of a Painter of 1908 put in writing many of the Fauves’ shared goals: a] their commitment to personal expression and individual instinct, b] their use of colour as an independent visual element with an emotional effect, and c] their rethinking of composition as pictorial surface. They all loved a style that typically showed bold distortion of forms and exuberant colour. Clearly they were less concerned with modern subject matter like Paris’ cafes and cancan dancers. 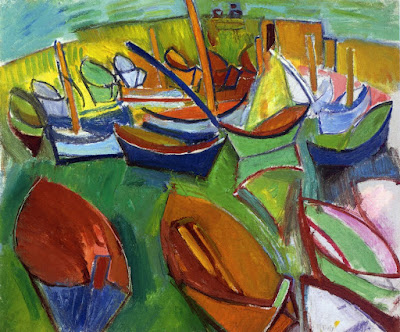 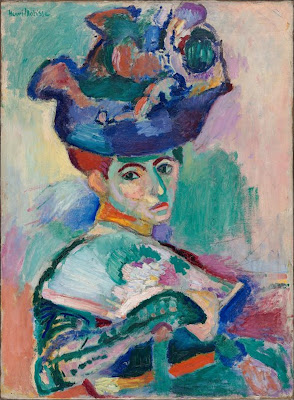 After 1908 the Fauves became less enmeshed in each other’s lives; Braque and Derain began developing Cubist tendencies under Picasso’s influences. We can see Braque’s emerging taste in Road near L'Estaque 1908 andVlaminck's in Winter Landscape 1910. Van Dongen was invited to join German artist Max Beckmann, where he participated in an exhibition of the Dresden Expressionist group Die Brucke. At the end of the short Fauvist era (1905-10), only Matisse was still exploring the potential of pure colour.

Yet the international influence continued. In 1910 Derain exhibited works at Wassily Kandinsky’s New Artists Association in Munich. In 1912 he took part in the Secessionist Der Blaue Reiter group show and then the Armory Show in New York in 1913. Franz Marc, August Macke and Lyonel Feininger were entranced. Fauvism's ideas had a strong influence on both the Cubists and the German Expressionists.

A short period, but an innovative and colourful one.

When we examined the fauvists in class, I thought Van Dongen's ladies were the strongest.

Agreed. Especially when compared to Matisse's Landscape at Collioure (1905), Braque's Olive tree near l'Estaque (1906) or Derain’s Ships in the Port de Collioure (c1906). Fine landscapes and seascapes but less colourful and powerful than Van Dongen's ladies.

Ambroise Vollard and Daniel-Henry Kahnweiler were important, agreed. But weren't they taking financial risks themselves, accepting modern art in their galleries?

Hello Hels, All of these painting look like they would be easy to reproduce in stained glass, which has the same characteristics of blocks of intense color in a flat plane.
--Jim

It is fascinating how often the gallery owners and patrons' names cropped up in late 19th and early 20th century art history. In “Gauguin, Cézanne, Matisse: Visions of Arcadia”, Vollard's role in publicising the artists' role in 20th century France was critical. And art scholar Bernard Berenson introduced Leo Stein to Paul Cézanne and helped Leo buy art from Ambroise Vollard's gallery. Kahn­weil­er organised 80 exhibitions of works by Braque, Picasso, Klee, Léger, Derain, Gris etc, and was the author of many books about cont­emp­orary art in early 20th century France.

Certainly they took a risk, but one that paid off handsomely.

You could not have described the Fauvists' art better: blocks of intense colour in a flat plane. And the more simplified and unified forms that emerged, the happier the artists were with the flatness of the canvas.

I have not heard of the Fauvist paintings transferring their skills to stained glass, but the Pre-Raphaelite Brotherhood painters certainly created magnificent stained glass art. Perhaps the PRB were so deeply steeped in medieval values, they found stained glass to be a perfect medium for art.