Twilight Over Berlin, currently at the Israel Museum Jerusalem, is an important exhibition for people wanting to understand modern German art (1905-1945). Some of the material in this blog post has come directly from the New Media Dept of the Israel Museum - many thanks.


My favourite German art started with the establishment of Weimar Republic and of the Bauhaus (both in 1919), as you can see in the post on the London Exhibition of German Art in 1938. But Expressionism actually started earlier in Germany. Expres­s­ionist artists strove to overcome the rigid traditions of the states’ art academies, as well as the Impressionists' naturalistic rendering of transient phenomena. The new style, which flourished in the German-speaking nations from 1905 on, was characterised by distorted forms, sharp colour contrasts and rapid brush strokes.

German society in the reign of Kaiser Wilhelm II (1888–1918) was seen by many as authoritarian and ossified, so freedom-loving intellectuals wanted it radically transformed. Several groups of German artists organised exhibitions of avant-garde art to break away from the established academies. Die Brücke/Bridge was a group of Expressionist artists founded in Dresden in 1905. Influenced by late medieval German art, the Brücke painters created unrefined figure compositions, unspoiled landscape and pristine forms of expression. Their yearning for the "primitive" was equated with flight from the city, a rejection of bourgeois Wilhelmine morality. After 1910 the Brücke artists moved from Dresden to Berlin and depicted the modern metropolis’ hectic life. 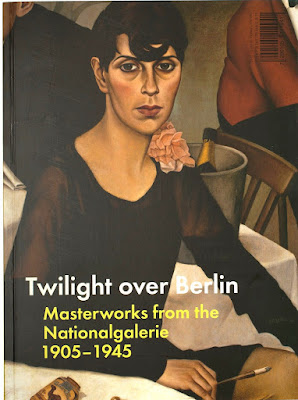 
The democratic Weimar Republic, established after the hideous WWI, was marked by strong contrasts. Although daily life continued to be deeply affected by the war, the unfavourable cond­itions imposed by the Treaty of Versailles and economic instab­ility, citizens actually enjoyed new-found freedoms! It is not an exaggeration so say the period was a golden age for cultural and creative activity.

But their art was not necessarily attractive. The younger generation emph­asised the ugly and grotesque, meant as an intentional affront to comfort­ab­le bourgeois society. New Object­ivity spread through various centres in the Weimar Republic, creating cynical, often caricature-like depictions of injured war veter­ans, unemployed workers and war profiteers. They portrayed an irrep­arably scarred society, denouncing the devastating effects of WW1.

The Nazi regime sought to put an end to this so-called art, branding it Degenerate. Already in April 1933, non-Aryan museum directors and curators had been fired from state institutions. Artists were forced to join official groups, and undesirables were dismissed from teach­ing posts in the academies and professional organisations. Many of the artists fled Germany, creating an avant-garde exiled community whose influence also arrived in Tel Aviv and Jerusalem.

Movements like Expressionism, Cubism, Dada and Surrealism were viewed as intellectual, elitist and foreign. Their work was associated with pernicious Jewish influen­ces, socialism and mental ill health. No matter what their political allegiances, artists who worked in modern styles came under attack. The directive issued to the commission, which culled 650 works for the Munich exhib­ition, defined Degenerate Art as works that insult German feeling, or destroy or confuse natural form, or reveal an absence of adequate manual and artistic skill. The culled art from 32 German public museum collections was selected and from July 1937, Entartete Kunst (decadent, unGerman) was on view in Munich. It attracted more than two million visitors. Over the following three years, it travelled throughout Germany and Austria and was seen by nearly one million more.

At the same time a much more lavishly displayed presentation of Nazi-approved art, the Great German Art Exhibition, opened to inaugurate Munich's House of German Art, the first official museum building erected by the National Socialists. The Great German Art Exhibition prom­oted ideals of beauty in which the key values were völkisch i.e from the authentic, historical people: family and community, physical vigour and military prowess.

Why did they open the two radically different exhibitions on the same day and in the same Munich street? The simultaneous presentation of the 2 exhibitions was to demonstrate the triumph of official art over deg­en­erate art and to eradicate forever the various forms of modernism that had permeated the German art scene since 1910. Did Joseph Goebbels realise that far fewer people bothered to queue for this second exhibition? 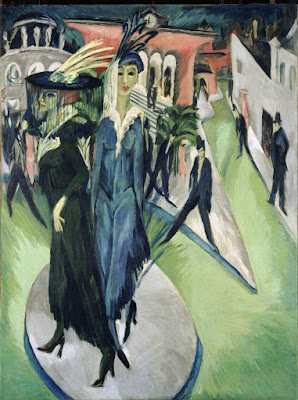 Most of the artists whose work is seen in the Israel Museum Exhibition were branded degenerate, their art confiscated under the Nazis and destroyed, or sold at auction. Some of the artworks that had been removed were brought back when the war ended; others were gradually re-acquired over subsequent decades. George Grosz participated in Dada Berlin and became a leading expon­ent of New Objectivity, denouncing the immorality of German society though caricatures of prostitutes and profiteers. A total of 285 of Grosz's works were confiscated from German institutions and 20 were included in the 1937 Degenerate Art exhibition. 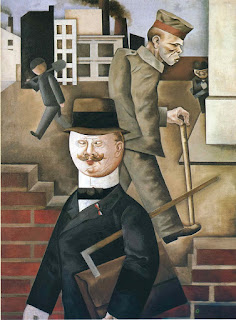 In Berlin after WW1, Christian Schad became an exponent of New Objectivity, painting cool, sharp portraits of his social milieu in the Roaring 20s. He painted the androgynous Sonja, with fashionable cloth­es, cropped hair and smoking Camel cigarettes, all attributes of the independent New Woman. Yet he was included in the Great German Art Exhibition in Munich, not the Degenerate Art Exhibition!

One room of the exhibition is dedicated to examples of the artistic styles of the Weimar Republic, from Dada to New Objectivity. Many of these works rail against both capitalism and the effects of WW1 on society. A prime example is Otto Dix’s anti-militarist The Skat Players 1920. This marked his trans­ition from Dada to the social­ly critical New Realism, depicting three hideously disfigured office­ers in a café playing skat, a popular three-handed German card game. 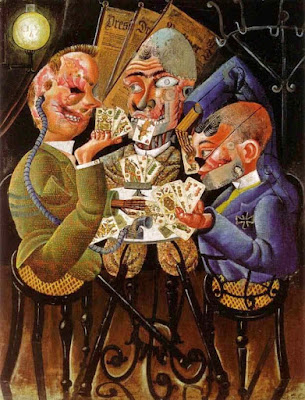 The irony of the Israel Museum displaying amazing art works that were banned in Germany by the Nazis is not lost on modern reviewers. This pres­ent­­at­­ion of 50 German master works on loan from the Nationalgalerie illuminates a profoundly influential cultural period, paying tribute to an aesthetic heritage of modernism that in the (very) long run prevailed over censorship, oppression and persecution. The exhibition 'Twilight over Berlin: Masterworks from the Nationalgalerie, 1905–1945' will continue in Jerusalem until 19th March 2016.

Hello Hels, Today most artists are valued for individual and unlimited expression, although officially-directed art such as the Great German exhibit you describe here, and some Chinese Communist art, for example, can eventually acquire a certain cachet. I wonder how this art compares in artistic merit with religiously-prescribed art, such as that of ancient Egypt or the Christian art of the Middle Ages.
--Jim

No wonder the Nazis hated the Skatspieler by Dix. The generals should have looked heroic but they looked nasty instead.

I think religiously prescribed art is a bit different. Artists in such cultures know in advance that if they want funding and patronage, they have to obey the rules. They then make an informed decision. Or they leave art and go into something more respectable.

The thing about being included in the Degenerate Art Exhibition of 1937 was that no-one knew in advance what was going to be acceptable and what would be banned. Imagine some poor artist in 1905 or 1920, who had never heard of Nazism, wondering what the politics de jour might be decades later.

Even in 1933, when the decision to cull Degenerate art from the public galleries was first made, it still wasn't clear which paintings would be taken and which would be left. "Works that insult German feeling, or destroy or confuse natural form, or reveal an absence of adequate manual and artistic skill" is the most useless definition of Degenerate that I can think of.

*nod* the Dix painting was seen as grotesque and unpatriotic by all the decision makers in 1933.

But Chagall's art was described as green, purple, and red Jews shooting out of the earth, fiddling on violins, flying through the air ... representing an assault on Western civilisation. Piet Mondrian's paintings were labelled as degenerate because abstraction was modern and ugly. It most peoples' opinion, these two artists were not remotely insulting to German feeling or lacking artistic skill.

Aside from the last work, I would happily hang any of the other three on my walls, especially the second one. Pity the exhibition is not here.

Of the 650 degenerate works culled from the nation's public galleries, some absolutely beautiful works went into the Munich exhib­ition. And some you would not like.

So I refer you to some of the best known cullings in:

After watching the movie "The Monuments Men" I bought the books detailing their work in Europe and Italy.
No one really knows how much 'degenerate' art was burnt by the Nazis but there were eye witnesses to the bonfires.

If we assume that the Nazi decision-makers were very clever men, we have to hope that they did not destroy much so-called decadent art. If they liked the paintings, they would have hidden the works away in their own collections very secretly. If they did not like the paintings, they would have sold the pieces abroad (via Swiss art auctions) and taken the desperately needed money for themselves. Burning masterpieces, even despised masterpieces, would have been a lose-lose situation.