Mystery plays in Britain and in Germany

Formal drama emerged in Britain by and for the church, perhaps to gain the interest of the common people. The medieval church did anything to attract congregants’ attention; they added sculptures, painted altar­pieces, wall fres­coes, crucif­ixes, stained glass windows and organised short bib­lical enact­ments.

The History of Drama showed how sections of the Mass were elab­or­ated until they became short liturgical dram­as. The Easter trope, for example, showed a short lit­ur­g­ical play with characters, additional dial­ogue, set, props and costumes. A similar trope de­vel­op­ed for Christmas, with the manger replacing the sepul­chre and the shepherds greeting the Christ child repl­acing the three Marys. The sighting of the star and the adoration of the wise men provided a drama for Twelfth Day. These tropes were perf­ormed in Latin, util­ising church vestments and church music.

Event­ual­ly difficult religious sub­jec­ts, along with the growing length and com­plexity of the plays, may have en­couraged the development of more elabor­ate plays than legitimately fell within the liturgy. Thus the tropes may have turned into the Mystery Plays. 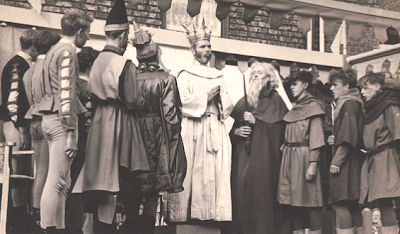 While the liturgical plays may have influenced the content of the Mystery Plays, we can see other influences in the well-establ­ish­ed tradition of processions, dances, mumm­ings and folk plays. In Britain these were included in fest­iv­ities like May­ Day, Midsummer Day and Christmas. The performances were in English, utilised sec­u­l­ar costumes creat­ed especially for the play, and were staged in the town squares and great halls by amateur play­ers. The dramas incorporated ancient folk stories, Christ­ian elements and traditional songs.

With the separation of the plays from the church, the primary goal became entertainment, although the story remained largely Biblic­al. Comedy and believable characters became essential parts of the plays. Realistic con­versat­ion was integrated into the play, as well as hilarious or rough language. Characters were developed for comic re­lief, dramatic effect or to create sympathy.

The plays were performed in a cycle. The first play was The Creation and the Fall of Sat­an, and the total set of plays would contain all the major scenes from the Bible, shown chronologically. The idea of forming the plays into cycles may have developed alongside the Fe­ast of Corpus Christi, celebrat­ing the red­emptive power of Christ through the miracle of the Host. The feast allowed for processions, cele­brations and religious plays.

As these Mystery Plays became more complex and pop­ular, and required el­ab­or­ate sets, cram­ming the audien­ce to the back of a room became difficult. This forced the ch­urch to move the plays outdoors, into the churchyard or the pub­lic square. The perf­or­m­ances were combined and held annually, the presentation oc­cur­ring on the 2-3 days before Corpus Christi. Presented in English, the peak of the Mystery Plays was from 1375-1575.

The cycles were still about the betrayal, death and resurr­ect­ion of Christ, but Corpus Christi also became the occasion for trade fairs in the towns that hosted the performances; many of the trade guilds assumed an important role in the pro­duction of the plays. The overall organisation of the prod­uct­ion was prob­ably handled by a religious guild, but the local craft guilds con­tributed to the staging by creating the pag­eant wagons used for sets, props and act­ors.

Manuscripts survive for only four complete cycles in English (York, Chester, Wakefield and a Midlands town, possibly Coventry), but it seems likely that the production of Mystery Plays in Britain was wide­spread. The four complete cycles togeth­er show the development of the cycles. The York cycle contain­ed 47 plays, dating from as early as 1378, but with many later revisions. At Chester, a play was performed as early as 1375, and by 1467 eight guilds were involved in pro­ductions. More guilds gr­ad­ually particip­ated between 1500 and 1540. The cycle at Coventry seemed to have been compiled from ex­ist­ing plays, and was sim­ilar to the other cycles in content.

The pageant wagons were the best stages for the Mystery Plays, each wagon contained one complete set for a play. The wagons were paraded through the streets at the beginning of the festival and then located in the town square. The aud­ie­n­ce could shift its focus from page­ant to pageant as the cycle of plays unfolded. Alternate­ly, the wagons may have been moved into place as requ­ired for the various plays. The dark space under the cart was used as the dressing room. To the audience, it must have seemed like a huge, outdoor entertainment!

An­imal characters were often pl­ayed by men in ap­propriate cos­t­umes. Scenes of torture or mart­yrdom were achieved by a variety of eff­ects, in­c­luding clever methods for putting dressmaker's dummies in place of live act­ors during the action. Noah’s Flood used spectac­ular painted cloth, all wet. Copper sheets and rot­at­ing casks of st­ones provided thunder. Basins were provided for baptismal sc­enes.

Productions of the mystery cycles died out in the mid-C16th. Bec­ause of their association with popery, the playing of the myster­ies was discouraged after the Protestant Re­formation. Some plays were subjected to censorship, and because the productions were exp­en­sive, financial considerations also helped end their runs. In any case, the plays were formally banned when Queen Eliza­beth I came on the throne in 1558. Only Ches­ter's cycle continued being perf­orm­ed until 1575, just after Will­iam Shakespeare was born in 1564.


But the Catholic Church also called for an end to religious plays at the Counc­il of Trent, because they believed the plays were secular and an­ti-cler­ic­al!! What a shock for Catholic France... where the Mystery Plays had been so popular.

Professional tra­v­­ell­ing comp­an­ies began touring the British country-side, using the guild hall in Stratford dur­ing the later 16th century - young Will­iam Shakespeare saw them! And we have to note the construction date of the first fac­ility housing a pro­fessional theat­re company in London: 1576. The timing seems irresistible.

The Mystery Plays were not performed again in Chester and York until the Festival of Britain in 1951. In 1987 Chester Mystery Plays became a registered charity which guaranteed to promote and produce the Chester Mystery Plays at five-yearly intervals. In 2004 medieval mystery plays were being revived at Canterbury Cathedral, starring actors Edward Woodward as God and Daniel MacPherson as Jesus, joined by a cast of 100 local people.

In Germany, religious drama for the ordinary citizens may not have developed on as imposing a scale as it did in England or France. Nonetheless the oldest Easter-play wholly in German dates right back to the early C13th and other New Testament themes were popular during the C14th and C15th. Tragedy only struck with the Protestant Reformation, as it did in Britain. In Germany's Protestant principalities, at least, the Reformation ended any medieval religious drama that used to be produced. 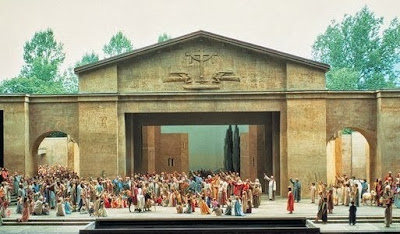 So why is Oberammergau in Bavaria so famous? The town (pop 5000) on the river Ammer is best known for its Passion Play, pre­sented during the first year of every de­c­ade. Originating in 1634, AFTER the English Mystery Plays had been closed down, the German passion play ful­filled a vow by the towns people to present a play de­pic­t­ing the Passion of Christ, if only God would end an app­alling plague. God did!

In 1871 a special performance of the Oberammergau Passion Play was held in honour of King Ludwig II. The king was so moved that he donated a monumental crucifixion sculpture, having chosen the material, artist and location for the monument himself. The completed sculpture arrived in 1875 and was unveiled in front of royalty. For three years King Ludwig returned to the Crucifixion Group to pay respect and to offer silent prayer.

The Oberammergau play had dramatic text, singers and music, expanding on scenes from the Old Testament depicted for the audience by motionless actors. These scenes displayed the links between the two Testaments. So this small town needed a very special th­ea­t­re, built in 1890 and modernised since. It has 4,800 seats for viewers, and space for 1,500 local peop­le to partic­ipate on the stage.

If you happen to be in Ob­er­ammergau during the play years (2000, 2010, 2020), get a seat ear­ly as they expect half a million visit­ors each time. But be realistic - the Oberammergau play has a running time of 7 hours, broken up for dinner. In years when the play is not on, visit­ors are allowed in to see back stage, the props and costumes.

An acquaintance especially went to Bavaria to see Oberammergau in what must have been 1990 if it is performed every ten years. She loved it.

the population of Oberammergau on a good day, with the wind behind it, may be 5,100 people. Yet every decade 2,500 townspeople become actors, set designers, singers, costume makers, makeup artists, orchestral musicians and lighting experts.

Not only do the townspeople get very excited. Each decade thousands of visitors pour into the town, in mini buses and hire cars. It is very cool.

The Sydney Morning Herald (7/6/1913) reported a mystery play that was performed in town to a packed audience, Trial Before Herod. It was accompanied by a lecture on the York Mystery Plays.

I wondered why 1913 audiences would have gone to a medieval mystery play in the New World but it says "to show us the beginnings of our modern drama". Quite right!

And note the reference to "world famous Ober-Ammergau"!

Hello Hels, I can see a relation between these plays and the reenactments, pageants, etc. that are performed at many historical monuments, such as Angkor Wat or even at Hong Mao Cheng here in Taiwan. Today, these shows have to be enhanced further with laser-light effects and blaringly amplified music (sound and light shows).

I guess it's what you said at the start of this post--if historic forts and temples are not interesting enough to pack 'em in, then combine them with more popular attractions.
--Jim

*agreed* People must have had a tough old time ...working hard 6 days a week and not having enough money to be well fed and warm. But the church only gave spiritual comfort, a promise of a better life in the Next World.

Then imagine the excitement when the travelling wagons pulled into town, filled with drama, comedy, colourful costumes and perhaps a bit of naughty behaviour on stage. I can even imagine an icecream stand nearby, making some seasonal profits :)