Glorious Days: Australia 1913 was an exhibition at the National Mus­eum of Australia that contributed to the Centenary of Canberra cel­eb­rations and explored life in 1913. It used contemporary objects, photos, paintings,  advertisements and toys; cars and trams vied for space in the exhibition, with figures dressed in the fashions of the period. And visitors had a chance to visit the 1913 cinema.

Two shipping events were highlighted. Firstly items from the Australasian Antarctic Expedition, which set out from Hobart in 1911 under Douglas Mawson, were on display and revealed the terrible conditions endured by Mawson and six of his men in 1913. More positively, ships like the eagerly-awaited Aurora arrived to huge rejoicing. The passage of Australia’s naval fleet through Sydney Heads was greeted as the highlight of the year: a sign of national maturity and of the capacity to fight a feared invasion from the north.

The year 1913 has been described as hinge-year, a year in which people embraced the modern world of automobiles, airplanes, gramo­phones, car assembly lines, simple cameras and cinema, even as att­itudes from the past persisted. It was a year in which American audiences were first exposed to cubism and fauvism at The Armoury show in New York, and Parisian audiences were initially outraged and then won over by Stravinsky’s The Rite of Spring.

On the verge of cataclysmic descent into total war, the Western world experienced a huge outpouring of energy, hopefulness and creativity. And Australia, a white outpost on the edge of Asia linked by blood and loyalty to the British Empire, experienced it too. The new Fed­eral Capital City was named Canberra in 1913, realising Australia’s confident expectation of a glorious future.

Australia gloried in a marvellous climate and outdoor leisure activities and sports. Despite a small population, Australia enjoyed great success in the world’s sporting arena, and our sporting prowess enhanced our national prest­ige. Everyone on the planet knew the achievements of well-known sports people like Annette Kellerman, Fanny Durack (both in swimming) and Victor Trumper (cricket). 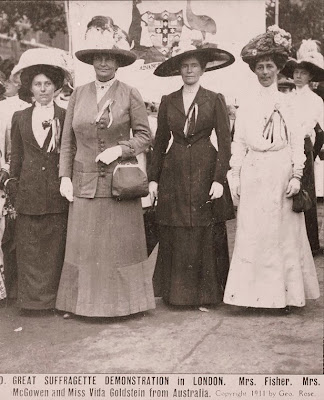 
In addition to the inauguration of Canberra, 1913 also saw the final section of the Trans-Australian Railway built, early plans to harness and protect the water resources of the Murray River Basin and the printing of the Commonwealth of Australia’s first stamps and bank notes.

Australia’s many innovations in the areas of human rights, health and social responsibility made it a leader of the Western world. Universal suffrage had been in place for years, although mandatory voting by every adult citizen did not start until the state of Queensland brought in legislation in 1915. Educ­at­ional standards were improving with the creation of universal & free high schools, and the creation of the country’s first free univers­ity in Western Australia. But for all its revol­ut­ionary advances, Australia in 1913 enthusiastically embraced the White Australia policy and many people had negative attitudes to anyone who was not of British extraction, including to Indigenous Australians.

The exhibition Glorious Days: Australia 1913 ended in October 2013. Achievements and ambitions that have been overshadowed for nearly a century by the outbreak of the Great War can be rediscovered in the truly beautiful book by the same name, edited by Michelle Heth­er­ing­ton. I had to put my young grandchildren onto the labour market to pay for it, but it was worth every penny.

I thought the book Glorious Days: Australia 1913 was published just for me! The Edwardian era is my all-time favourite era in history and the first wave of feminists are my heroes. But the women’s movement only gets a couple of pages in the book and Vida Goldstein gets only four microscopic mentions. So I had to rely on the Australian Dictionary of Biography instead.

Vida Goldstein (1869-1949) was born in rural Victoria to parents who were involved in political movements and social justice. Her mother was a suffragist, a religious teetotaller and worked for social re­f­orm. The Goldsteins moved to Melbourne in 1877 for the four daugh­t­ers’ education. When The Depression hit during the early 1890s, Vida and her sisters ran a prep school to help the family’s finances.

Vida’s main interest throughout the 1890s was her school and urban social causes, work that gave her first-hand experience of women's social and economic disadvantages. It wasn’t until the turn of the century that Vida Goldstein took on a much greater organising and lobbying role in the women’s movement.

The year after Federation in 1901, the government of the newly formed Australian Commonwealth allowed wo­m­en to vote in all national elec­tions (although not yet in three of the state elections). From this position of strength, Goldstein travelled to the USA in 1902, speak­ing at an international suffrage conference and giv­ing evidence before the still rather anti-woman USA Congress.

With the support of the newly formed Wom­en's Federal Political Association, Vida stood for Parliament in 1903, becom­ing the first woman in the entire British Empire to do so. She failed, so she instead concentrated on a] female education and political organ­isation and b] her monthly journal the Australian Women's Sphere. In 1911 Goldstein visited the UK on behalf of the Women's Social and Political Union. Her speeches around the mother country, a place where women did not have the vote, drew huge crowds.

In the pre-war years, the recurrent themes in her writings were her visionary suggestions for a new social order; it was to have a spiritual foundation and be based on the brotherhood-of-man concept of true socialism and on Christian ethics. Vida sympathised deeply with labour and the cause of working peoples.

Vida formed the Women's Peace Army in 1915. Then she recruited Emmeline Pankhurst's daughter Adela Pank­hurst, who had recently emigrated to Australia, as an organiser throughout World War One. Vida stood for parliament many times (1903, 1910, 1913, 1914 and 1917) until the middle of the war, the last time on the principle of internat­ional and individual pacifism. 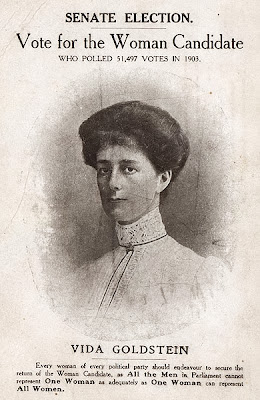 Vida Goldstein standing for a senate seat
The poster does not say which year, so probably 1910

Long after Federation and universal suffrage had been won in Aust­ral­ia, Goldstein active­ly lob­bied parliament and wrote journal articles on women’s most pres­s­ing issues such as equal­ity of property rights, birth control and the creation of a system of children's courts. What a woman!

Ballarat Art Gallery has an exhibition until late January 2014 entitled Capital and Country. It is devoted to Australian painting in the years after Federation. The exhibition has two paintings very relevant to this post. When Melbourne-Sydney rivalry meant that Australia's new capital city had to be located in the empty bushland between these two cities, a competition was established in Dec 1912 to paint a topographically accurate view of the site BEFORE development began. In the end, the prize was won by W Lister Lister and a second prize was awarded to Penleigh Boyd, each of whom painted the view in the summer of 1913. This year's Centenary of Canberra cel­eb­rations could not have been better marked.

Seems Adela Pank­hurst was the daughter of Emily Pankhurst?

I saw the exhibition and yes, it was a glorious era. But how could they not have known about the imminent descent into total and catastrophic war?

Iron Lady Emmeline Pankhurst had three daughters who were in the women's movement with mum.

Daughter Christabel ran the WSPU, but the organisation split in 1913 and the other two daughters, Adela and Sylvia, left. The Iron Lady got sick of Adela's independent streak and shipped her out to the colonies.

I didn't like Adela's politics, but at least she worked very hard here.

The Edwardian era was one of great progress in science, literature, the visual arts, architecture, education, politics and fashions. They thought they were the cleverest generation ever born, especially in Australia.

Hello Hels, We must be cautious when judging other times by our own standards but it seems that America and Australia were alike in tending to exclude certain groups from societies that were starting to show the world their economic and cultural influence.

Sinclair Lewis' 1922 novel Babbitt shows how readily people who wanted to enjoy the bounty were brought into line with these exclusionary policies.
--Jim

I suppose it depends on which groups were being excluded. If you mean women, that battle had largely been won before the Edwardian era. All the federal and state governments in Australia had quietly granted universal suffrage, even if they blocked equal pay for decades.

If you mean non-whites, be they Asian or indigenous communities, I couldn't agree with you more. What a disgrace - we fought for good pay and conditions for the working class because equality was important. And excluded non-whites!!!

Hmm it appears like your website ate my first comment (it was extremely long) so I guess Ill just sum it up what I wrote and say, Im thoroughly enjoying your blog. I as well am an aspiring blog writer but Im still new to the whole thing. Do you have any helpful hints for first-time blog writers? Id certainly appreciate it.

I have to assume your blogging passion is Edwardian history, since you are reading my posts.

So I would advise you to read the top five academic journals and popular history magazines _every_ month to see what historians are saying about your favourite topics. eg what was Goldstein's relationship with the Pankhursts?
Why did Goldstein not get into Parliament?
Was pacifism a viable response in WW1?

I have added a reference to an exhibition in Ballarat Art Gallery called Capital and Country: the Federation years 1900-1914.