At my parents' retirement home, there were many Hebrew and Yiddish songs at the concert last week, but no song was as emotional and as meaningful to the residents as Oyfn Pripetchik/On the Hearth. These residents were born in the 1920-33 era, immig­rants who arrived in Australia in the desperate post-WW2 quest to increase Australia's population.

Apparently I learned Oyfn Pripetchik in my grandparents’ lap, but it wasn’t easy to find the exact origins of the song. I do know that Mark Warshavsky (1848-1907) was born in Odessa. He studied at Kiev University and then practised law in that city. He started to write songs and sing them in his social circle, accompanied by a simple instrument. But he did not memorialise those songs in writing, singing instead off by heart. Thus I still cannot find a date for Oyfn Pripetchik, although it was certainly before 1900.

It did not matter to Warshavsky’s contemporaries that the song was not recorded; his songs quickly spread throughout the huge Ukrainian Jewish community in any case. According to a post-WW1 census, the total number of Jews in the USSR was 3 million, of whom 60% lived in Ukraine. 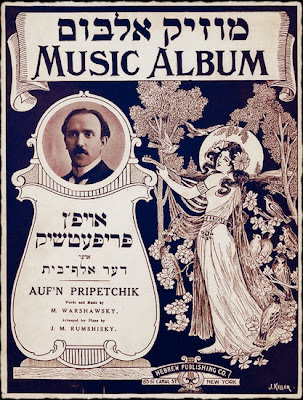 In 1890 Warshawsky met the genius of Yiddish letters, Sholem Aleichem. With Sholem Aleichem's cooperation, Warshavsky did publish his first collection Jewish People's Songs in Odessa and Kiev, both in 1900. The collection included songs described the everyday life of Jews in the Russian Empire. Together Sholem Aleichem and Warshawsky started to tour around Rus­sia performing their own repertoire. They also had plans to travel to the USA, however those plans never eventuated since Warshawsky suddenly became ill and died.

A later edition of the Warshawsky's songs was published after WW2 in the New World.

It is said that Warshavsky’s work in 1900 was inseparably linked with the life of his people, with all their sufferings and joys. All I can tell you in 2013 is that the residents in my parents’ retire­ment home still expressed the same feelings: “yes, that is exactly how it was”… “we may have been poor and hungry, but every Jewish child loved learning”… “that was mama’s favourite song”. 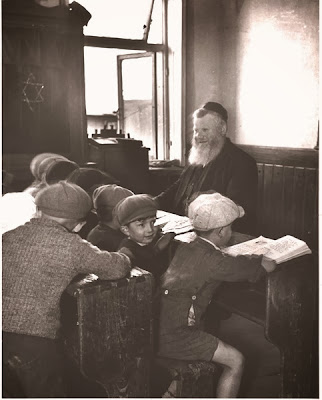 
On the hearth, a fire burns,
And in the house it is warm.
And the rabbi is teaching little children,
The alphabet.

Learn, children, with great enthusiasm.
So I instruct you;
He among you who learns Hebrew pronunciation faster -
He will receive a flag.

Learn children, don't be afraid,
Every beginning is hard;
Lucky is the one has learned Torah (the Law),
What more does a person need?

When you grow older, children,
You will understand by yourselves,
How many tears lie in these letters,
And how much lament.

When you, children, will bear the Exile,
And will be exhausted,
May you derive strength from these letters,
Look in at them!

Until I saw the Vishniac reference, I thought the cheder photo was of me and my friends.

Really fabulous Yiddish songs. I love to read your post very much. A big thanks for sharing with us !!

There was a timelessness in those photos "agreed". I don't think I could tell if the liitle boys were in a Russian cheder in 1900 or a Polish cheder in 1930 or a Sydney cheder in 1950.

Thank you! The melodies are deeply emotional. The words are a bit more sentimental.

Hello Hels, I never knew these songs, but I just enjoyed listening to Oyfn Pripetchik and other similar ones on Youtube, which has a nice assortment of them.
--Jim

Good to hear from you. I am way out of my depth here because I nothing about music.

Modern songs might have a much more interesting beat, but they don't have emotional power. I think all folk songs, on the other hand, are powerful over a long time because they do reflect old values, old emotions. So if we were at a folk music concert for elderly Croats or Scots, I think the tears would be flowing just as strongly.

A beautiful song, with a haunting melody.