Katy Waldman wrote in The Age (5/10/2013) the following story. The New Yorker reports that training academies for Reich wives-to-be cropped up throughout the late 1930s, to usher young maidens towards their spiritual and reproductive destinies. Classes designed to mould housewives out of office girls covered cooking, ironing, gardening, childcare, suitable cocktail conversation, how to polish boots and daggers. Students also took a series of oaths: They pledged undying fealty to Hitler, promised to get married in a neo-pagan ceremony presided over by a government official and not in church, and vowed to raise their children in harmony with party principles. Upon completing the course, women were issued certific­ates of accomplishment, stamped with the Germanic tree of life, and encouraged to breed.

The Reich Bride School, known as Reichsbräute­schule, initially only accepted women engaged to members of the SS. The young women were barred from enrolment if they had Jewish or gypsy heritage, physical disability or mental illness. However within a few years the academies were wel­com­ing any bride-to-be, SS or otherwise, as long as they had the necessary racial prerequisites.

A curriculum was recently unearthed in the German National Archive. As Gertrud Scholtz-Klink, leader of the NS-Frauenschaft and the highest-ranking woman in the Third Reich, said in a speech to the party congress in 1935: Women must be the spiritual caregivers and the secret queens of our people, called upon by fate for this special task! To become those queens, the future hearth goddesses of the Rhine were to spend preferably two months before their wedding day in bridal camp to recuperate spiritually and physically, to forget the daily worries associated with their previous professions, to find the way and to feel the joy for their new lives as wives. 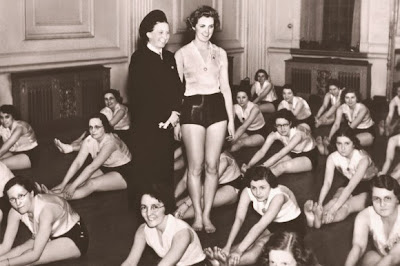 It's hard to know, Waldman wrote, exactly what that means but photos from the Archive show students marching through hayfields, bustling around kitchens, hemming one another's clothes and arranging herbs. And they acquired a special knowledge of race and genetics so that they might fulfil their calling as sustainers of the race. 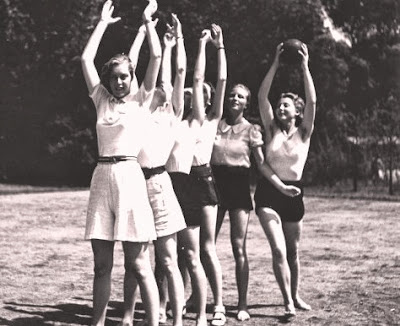 The Third Reich awarded bronze Crosses of Honour to German mothers who bore four or five children, silver to those with six or seven, and gold to those with eight or more. And newlyweds were given a loan of 1000 Reichsmarks (about $5200) of which they were allowed to keep a quarter for each child they had.

What the Age article does not say is that the faded photos and texts are reminiscent of scenes of rural life in the C19th: surviving off the land, communal living, hard work and simple, wholesome pleas­ures. In fact, they give a rare glimpse inside a Reichsbräute­schule. The first of the bride schools, a vast villa designed to look like a model household, was built in 1937 on Schwanenwerder Island, on Berlin’s beautiful Wannsee Lake. And Gertrud Scholtz-Klink was the ideal woman to head up the Reichsbräute­schules. She was married, had six children and by 1929 had became leader of the women's section of the Nazi Party in Berlin. In 1933, Hitler appointed Scholtz-Klink as Reich's Women's Führerin and head of the Nazi Women's League. In July 1936, Scholtz-Klink became head of the Woman's Bureau in the German Labour Front.

Once the first bride school was established in 1937, others followed and by 1940 there were at least 9 in Berlin, and others in Oldenburg and Tübingen. Some of these schools were still operating as late as May 1944. The bride school photographs themselves took pride of place in the Nazis’ official biweekly magazine for women, NS-Frauen Warte.

I have deleted all the snippy comments from the Age article, yet this still raises a new question in my mind: Did not every nation try to train its young women to be good wives, mothers and house keepers, according to its own value system? Other nations may not have poured the same amount of money into bridal school architecture and staff­ing as the Germans did, but which female high school student from the 1950s and 1960s has forgotten cooking classes, lectures on health and hygiene, and baby welfare training? Not me. I remember every single class!

1. Plan ahead to have a delicious meal — on time. This is a way of letting your husband know that you have been thinking about him, and are concerned about his needs.

The Good Housewife’s Guide
apparently published in Housekeeping Monthly, 13 May, 1955.

2. Prepare yourself: Touch up your makeup, put a ribbon in your hair and be fresh looking.

3. Clear away the clutter. Make one last trip through the main part of the house just before your husband arrives, gathering up school books, toys, paper etc. Then run a dust cloth over the tables.

4. Prepare the children: Take a few minutes to wash the children's hands and faces if they are small, comb their hair and change their clothes. They are little treasures and he would like to see them playing the part.

5. Minimise noise: Try to encourage the children to be quiet.

6. Don't complain if your husband is late for dinner. Count this as minor compared with what he might have gone through that day.

7. Make him comfortable: Have him lean back in a comfortable chair or suggest he lie down in the bedroom. Have a cool or warm drink ready for him.

8. Listen to him: Let him talk first.

9. Make the evening his: Never complain if he does not take you out to dinner. Try to understand his world of strain and pressure, his need to be home and relax.

In the Nine Commandments for the Workers’ Struggle laid down by Her­man Goering, Hitler’s deputy, it was little surprise that marriage, child rearing and good house keeping featured so prominently in the Nazi vision of the ideal family. But that was EXACTLY the same for me and for the other girls in high school in 1963. I rest my case.

Points one to nine seem to have been quite western world wide, maybe even further than that. Point number ten was left out.

"No matter how weary you feel, always be prepared to accept your husband's advances with cheerfulness and enthusiasm."

Hello Hels, Certainly cooking, child-care, etc. are common subjects to all women, especially in a (sometimes not especially) earlier day. However, I am guessing that your school did not require fealty to Hitler, or screen you for religious, racial or health issues.

To me, that constitutes a real and substantial difference.
--Jim

An interesting article, and I think you make a valid point about general western attitudes to women which persisted into the 1960's.

Re racial purity, racism anti semitism etc, this was implicit rather than explicit, and young British girls would have had a loyalty to King and Empire instilled in them.

Nazism of course had many sympathisers particularly among the upper classes in the UK.

I wonder why that wasn't included? Perhaps it was too explicit about recreational sex, rather than mandatory procreational sex three times in the marriage.

Presumably all high schools had educational courses for their girls about cooking and childcare.. agreed.

But there seemed to be something more doctrinaire in the German Bride Schools and in The Good Housewife’s Guide - that young women's role wasn't just to make a happy life for themselves. Rather, first and foremost they had serious obligations to their nation and their husbands.

every Monday morning, in heat waves or rain, school students stood in assemblies across this country and chanted the Pledge of Allegiance in unison. "I love God and my country; I honour the flag; I serve the Queen, and cheerfully obey my parents, teachers and the law".

they really do look gorgeous young women! I suppose being engaged has always been the happiest time in a young woman's life, being loved by some gorgeous hunk of manhood but without (yet) the messiness of babies' nappies and relentless cooking-cleaning-shopping.

Hi Hels. You are right to suggest that the Anglo world of that period was not as different from Germany as we would like to think.
In fact I suspect the Germans picked up a lot of their nastier innovations and traits in immitation of the English. The concentration camp (introduced by the Brits in the Boer War) and ideas of racial purity, are examples that comes to mind.

The argument that Nazi Germany was not that different from other developed countries at the time does need to be advanced to counter the persistent propaganda that it was radically different. It was not just in women's education; I am reminded that Australia's PM Robert Menzies made a speech condemning modern art in the same year as Hitler's speech on degenerate modern art.

that is my point exactly. Most societies treated their young women in exactly the same way, grooming them for the highest ideals of that particular society.

Every engaged woman KNEW she would have her name taken away from her, her ability to work outside the home severely restricted and her access to superannuation was blocked by law. If she was raped by her husband, police would not intervene because rape in marriage was explicitly denied in legislation.

No wonder bride schools in most societies encouraged a totally romantic, nationalist, self sacrificing sense of destiny. Not in imitation of the English, but to suit their own societal ideals.

Have you read the book Addled Art by Lionel Lindsay? It is the most nasty, vicious, anti Semitic, anti modern, anti-women and anti-gay book I have seen for years. Yet Sir Robert Menzies wrote a glowing letter to Lindsay, saying that he had read Addled Art with "supreme joy".

Unfondly, I remember my co-ed Jr. and Senior High Schools in California. I graduated in 1953.
Girls took cooking and sewing classes. Boys got metal and wood shop. Typing was mixed. But there certainly was a great divide back then. Now, I'm the cook of the family (never took up sewing...)

I hear you brother! Not only was there a rigid division between the genders, there was also a downplaying of women's potential.

This is just fascinating. I didn't know about the neo-Pagan ceremony requirements and that interests me because I once studied the links between religion and far-right wing movements (specifically Protestantism).

The schools are pretty extreme in their views but your observation regarding your own learning experienced is really interesting. I studied home economics in high school and what always interests me about that Housewives guide is that as a high school student in 90s Apartheid South Africa, what we learnt wasn't too different.

Agreed. The 2013 newspaper reviews of the bride schools seemed to suggest that only in Nazi Germany would such training be tolerated. As you found from the Housewives Guide, preparing young women for having families and running homes was a very wide spread practice. Although the details might have changed from one society to the next.