Sonoma - the most important Spanish Mission in California?

A few years ago, when visiting San Diego, I was fascinated by the Spanish plan to dot the Californian coastline with Catholic missions. In every location along the 966ks-long el Camino Real, the goals of the Spanish missions were to Christianise the local Native Americans, to teach them Spanish, to train them in useful industries and to become financially self-sufficient institutions in just a few years. In short, the missions represented the first major effort by Europeans to colonise the frontier Pacific Coast region. 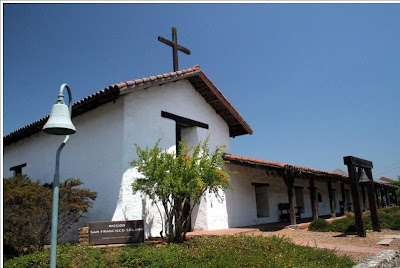 Crop farming was the most important industry of any mission. Each mission had to create its own kitchen gardens, orchards and vineyards. The Mission grape and the Mission olive became very famous in California. The plan was that within ten years after opening for business, each mission would be self sufficient enough to hand the facilities over to the people of that mission. The Spanish crown did not want Spanish money flowing out of its Mexican colony forever, supporting missions in distant California.

This post will concentrate exclusively on the Mission San Francisco Solano in Sonoma (53 ks north of San Francisco). Certainly it looked and behaved like all the other Spanish Missions that were built before 1823, but Sonoma’s facility stood out. But not because of its magnificence or size.

Firstly in September 1821, the Spanish viceroy signed the Treaty of Cordoba whereby Spain granted independence to Mexico. Since the Sonoma Mission was the only facility built AFTER Mexico’s arrival as an independent sovereign state, it was the only mission founded under Mexican governance rather than Spanish governance. 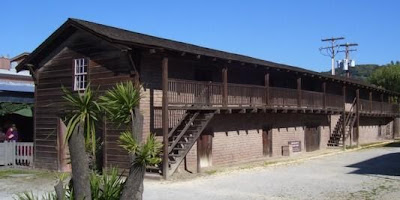 Secondly Fort Ross was a fortified Russian trading post on the Sonoma Coast, 100ks north of San Francisco. This, the most southerly Russian colony in North America, was intended to provide their colleagues in the frozen north with agricultural goods. 25 Russian and 80 Alaskan men waded ashore in 1812, set up a temporary camp, and began building houses and a sturdy wooden stockade for the Ross Colony. The stockade was impressively fortified, in order to give the enemy in Mexico, AND especially in the Spanish Mission, reason not to invade the Russian colony. Russian Fort Ross, by the way, lasted until 1842, longer than the Sonoma Mission which was secularised by the Mexican government in 1834.

The first book you might like to read is The Missions of California, written by Stanley Young and published by Chronicle Books in 1988. Apparently Father Jose Altimira chose the site for the mission in Sonoma, offended the already existing missions close to San Francisco by asking that they be closed, then launched into building Mission Solano with support only from the Russians! In April 1824 a temporary wooden chapel was dedicated in Sonoma and soon Native Americans came into the Mission.

The next year a long, low adobe wing for the padres’ quarters was finished. An adobe was a building made from sand, clay and organic material, which the builders shaped into bricks. These bricks, beloved by Mexican builders, were dried in the sun and placed within building frames.

Two years later a large adobe Mission church was laid, just east of the padres’ quarters. The women’s quarters and workstation were the last sections to be built, along the back of the courtyard. Beyond the courtyard walls there was a tannery, hide vats, vineyards, orchards, crops and livestock. In fact a total of 10,000 acres of land was allocated to raise crops and livestock. But Altimira was infamous for his temper and his floggings, and in 1826 disgruntled Native Americans attacked and sacked the mission. Altimira escaped with just the clothes on his back. 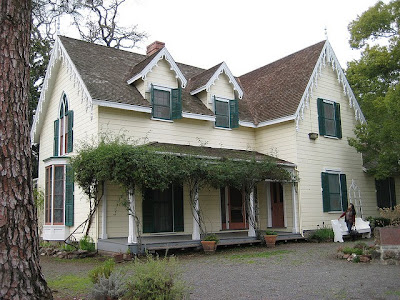 General Vallejo's home in Sonoma
The kitchen, granny flat and hermitage are in separate buildings behind the house.

The presence of rock-solid army barracks, next to the Sonoma Mission, was a surprise. The two-storey, wide-balconied, adobe barracks facing Sonoma's central park was built to house Mexican army troops. They were placed under the command of General Mariano Vallejo, previously Commandant of the Presidio at San Francisco. Unfortunately these troops did not arrive in Sonoma until 1834 when the Mission was just about to go into its decline. So did the army move to Sonoma to protect the Mission? To provide military expeditions sent out from Sonoma to subdue rebellious Indian tribes? Or, as General Vallejo believed, to be the Mexican Provincial Frontier of the North against the Russians?

Until the mid 1840s, the Presidial company of Sonoma became the most powerful military force in California. I don’t have time to talk about the short-lived California Republic that was proclaimed in Sonoma, but note that in July 1846, the Republic was quashed and victorious US military forces used the Sonoma barracks. This may have been a tiny town, but its C19th history was significant.

Quite separate geographically from the Sonoma Mission and the army barracks was General Vallejo’s residence. Vallejo also wanted his home to be separate from the other facilities architecturally, so he selected New England taste – twin porches, dormer and gothic windows, and decorative timber carvings along the eaves. This lovely two-storey home was the only facility in Sonoma not to be given the traditional adobe exterior.

Gen Vallejo’s home was acquired by the State in 1933 and preserved as a historic site. The Mission’s buildings were damaged by the earthquake damage of 1906, so restoration work had to start in 1909. The Mission was acquired by the State in 1968, as were the barracks next door. It takes the historically minded tourist a full day to see all the important sites in Sonoma, including dining in/near the gold-rush buildings, Blue Wing Inn and Toscano Hotel.

The 21 Spanish Missions and Spanish Presidios were extremely important for the development of California, at least in the decades before California joined the Union in September 1850.  Yet there was no specific celebration of the Camino Real in any world fair held in the USA until 1939!! The best we can say is that the principal buildings in the Panama–California World Exposition of 1915 were all in the Spanish Colonial Revival style, inspired by California’s recently restored missions. 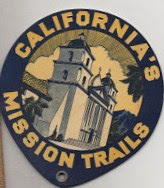 The missions along the Camino Real, some of California's oldest structures and the most-visited historic monuments, were finally photographed, modelled, exhibited and analysed at the 1939 San Francisco World Fair. The souvenir from the California Mission Trails building had 18 pages containing maps and information on the California Missions.

What happened to the Russians - did they attack the mission or did the mission attack Fort Ross?

I doubt if a shot was ever fired in anger, from either direction.

Hello Hels, There is something awesome in visiting California's missions, not only for their own beauty and history, but also because of what they represent in preceding all the development that came later. I once drove up the coast and had the opportunity to visit several of them, but any notes or photographs I took are deeply buried at present.

I had never heard of Spanish Mission architecture before my first visit to California and was bowled over by both its own, original beauty and its modern adaptations. We have very similar climate and land usage to California and it would have been perfect here!

But you are right... the history did influence later development, a history that has been tricky to deconstruct. Do find those photos... I would love to see them published.