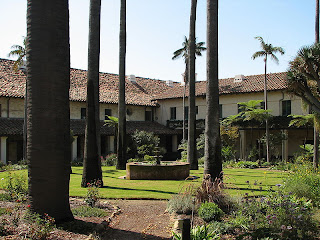 Old Mission Santa Barbara, established in 1786 on the site of an old Indian pueblo, was one of the chain of 21 Franciscan Alta California missions established by the Spanish. Eventually they stretched up the Californian coast, along the 966ks-long el Camino Real. As with all the missions founded by the Spanish in this and other parts of New Spain, Santa Barbara arose from the need to control Spain's ever-expanding holdings.

But the government and Church also realised the colonies would require a literate population base that Spain could not supply. So some 300,000 indigenous Americans had to: learn Spanish, develop vocations and adopt Christianity.

Since 2003, Santa Barbara Mission has developed a special outdoor museum called La Huerta Historic Gardens. This orchard-garden was built as a collection point for the disappearing plants of California’s mission period, 1769-1834. Only plants that were specifically documented during the mission era are allowed in the Huerta.

As well as plants imported by the Spanish, the huerta also contains a collection of plants grown and used by the local indigenous people, the Chumash. Virginia Hayes showed that plants grown during the mission era have been discovered through research into the writings of the church officials, visitors and residents. They reveal an astonishing array of non-native as well as native plants that were cultivated on mission property eg corn, cauliflower, lentils and garlic which grew as early as 1769.

Utilitarian plants valued for fibre included agave, cotton, flax and hemp. Palm fronds provided thatch and brooms. Gourds were cured and carved into bowls, acacia and Peruvian pepper tree sap was used for glue and castor beans were processed for medicinal oil. Native trees were harvested for their wood.

Today the Huerta is showing visitors that plants have always spread from country to country, bringing with them different cultural, medical and gastronomic benefits. The Spanish arrived in southern California with their plants already on board. As early as Columbus’ second voyage to Hispaniola in 1493, cuttings of 20 plant varieties were brought over on the 17 ships, as well as live stock. 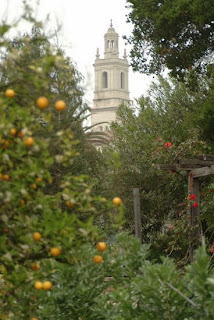 Columbus also brought with him some cuttings of sugar cane which were planted in Santo Domingo. And Columbus took back New World exotica with him eg chilli peppers, cacao plants and maize.  Within just 20 years, crates of Hispaniola sugar were already being shipped home to the Iberian peninsula. Cortés, the conqueror of Mexico, also became an influential sugar producer and these plantations had an enormous impact on the economy of the New World.

In my last Spanish Mission post I was fascinated to note that the goal of the missions was, above all, to become self-sufficient in relatively short order. So crop farming was the most important industry of any mission. Each mission had to create its own kitchen gardens, orchards and vineyards. The Mission grape in particular became very famous in California. The Mission olive even more so.

Old Mission Santa Barbara still occupies over 10 acres of beautifully manicured modern gardens, lawns and rose bushes. It has a number of worthy aims, including being a spiritual centre; educating and serving; promoting the arts and cultural heritage; advancing ecumenism and being a reconciling presence in the community. But arguably their most important work is the Huerta project ie the repository garden for historic plants from the Mission era. As well as organised tours for students etc, there are Open House days where docents/volunteer guides take visitors around La Huerta.
Posted by Hels at 12.5.12

Had heard a little of this, just so fascinating, thanks Helen.

This is Belgium said...

Hello Hels:
Having spent half a lifetime, or so it now seems, gardening, designing gardens and having a garden open to the public which did, in the years we made it, achieve National recognition, we have found this post particularly interesting. It is so good to know that the Santa Barbara Mission gardens are still preserved, even if in somewhat altered form. But then it must always be acknowledged, or so we think, that gardens are living things and as such subject to change.

until a couple of years ago, I would say exactly the same thing. I got interested in the topic originally because no-one could give a realistic explanation of Spanish mission architecture, so popular in the USA but almost unheard of in Australia.

my pleasure and welcome aboard.

nod.. visitors and scholars seem to be fascinated.

Santa Barbara Mission opened its outdoor museum called La Huerta Historic Gardens as recently as 2003. If they wanted ONLY plants that were specifically documented during the mission era, they had to do a great deal of research from primary sources, dating back to the late 18th century.

We took the children to see Santa Barbara Mission. We all loved it, adults and children. Where are the other 20 or 21 missions and can we visit some of them on our next visit to California?

a terrific map of all the missions can be found at http://melbourneblogger.blogspot.com.au/2010/02/spanish-missions-in-california.html

Note that only two missions were created north of San Francisco, San Rafael and the Mission San Francisco Solano, founded in Sonoma in 1823, the last mission opened. So they are easy to get to.

Although a couple of the missions are in ruins, many of them are still used for Catholic worship, retaining at least some of original architectural and historical elements.

Thanks for posting this Hels! The mission (and the entire area around Santa Barbara) is just beautiful.

agreed...the Spanish couldn't have selected a more beautiful region anywhere to build on. The Camino Real is close to the ocean all along its route, the weather is stunning, the soils are rich and the Spanish architecture was perfectly adapted.

Hello doll! I`m watching your blog for a while! do you wanna follow each other? kisses

welcome to the wonderful world of art and architecture, and landscape design.

Helen, check out this book: 1493, by Chatrles C. Mann. He discusses the results in the rest of the world, of the 'discovery' of the American Continents, particularly in the distribution of foods that no one had ever heard of: potatoes, tomatoes etc....

One of the joys of blogging is to receive readings suggestions from people we don't know... about authors we have not read before. I will find the Mann book in our academic library.

The researchers and curators at Santa Barbara Mission certainly recognise those enormous international changes that were inaugurated by the Spanish conquest of the Americas. Their problem was to select 1786 as the starting point.

One of the joys of blogging is to receive readings suggestions from people we don't know... about authors we have not read before. I will find the Mann book in our academic library.

The researchers and curators at Santa Barbara Mission certainly recognise those enormous international changes that were inaugurated by the Spanish conquest of the Americas. Their problem was to select 1786 as the starting point.