The Australian War Memorial tells of how, soon after its acquisition by Britain during the Napoleonic wars, the tip of Africa had been shared between British colonies and independent republics of Boers i.e Dutch–Afrikaner settler farmers. In order to escape British rule, many Boers had moved north and east from the Cape to settle on new lands which later became the ind­ep­endent Boer rep­ublics of the Orange Free State and the Transvaal. The relationship between the British and the Boers was often tense, with Britain extending its control by annexing Natal in 1845, though Lon­don did recognise the two republics in treaties signed in the 1850s.

The two Boer republics, Orange Free State and the Transvaal

The discovery of gold and diamonds in the Boer republics in the 1880s further intensified the rivalry, particularly as British citizens flooded into the Boer territories in search of wealth. The rights of British subjects in Boer territory, British imperial ambition and the Boer desire for to stay outside the British Empire caused more friction. In 1899 the Boers were provoked into preventing what they saw as an impending British conquest.

The conflict in South Africa is generally divided into three phase:
1] late 1899, when the British infantry were defeated or besieged by highly mobile Boer mounted troops.
2] from Dec 1899 -> Sep 1900, which involved a British counter-offensive, resulting in the capture of most of South Africa’s major towns and cities.
3] from Sep 1900 -> May 1902, when the war was mainly a guer­rilla conflict between British mounted troops and Boer irregulars. 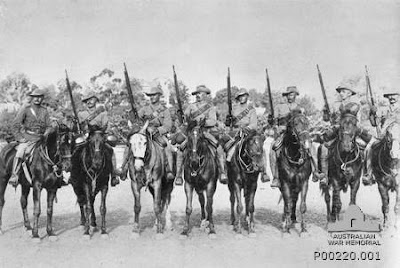 The outbreak of war had long been expected in both Britain and Aus­tralia. Believing that conflict was imminent, each of the Australian colonies ultim­ately sent 4-6 contingents. The first groups arrived in South Africa in late 1899.

Many soldiers of the Empire died, not just in battle but of disease, while others succumbed to exhaustion and starvation on the long treks across the veld. In the early stages of the war, Australian soldier losses were particularly high because of disease. 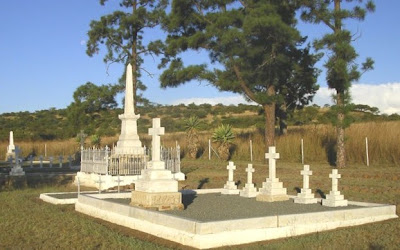 Empty battle fields in KwaZulu-Natal with nothing but graves.

After a series of defeats in 1900 the Boer armies became fragmented, forming groups of highly mobile commandos which harassed British troop movements and lines of supply. Faced with this type of warfare, the British commanders became increasingly reliant on mounted troops from Britain and the colonies.

After Federation (1/1/1901), and close to the end of the war, the Australian Commonwealth Horse contingents were raised by the new central government. These contingents fought in both the British counter-offensive of 1900, which resulted in the capture of the Boer capitals, and in the long guerrilla actions which lasted until the war ended. Colonial troops were valued for their ability to shoot and ride.

After September 1900, by which time the war had become mainly a guerrilla conflict, Australian troops were deployed in sweeping the countryside and enforcing the British policy of cutting the Boer guerrillas off from the support of their farms and families. This meant the destruction of Boer farms, the confiscation of horses, cattle and wagons, and the rounding up of the civilian women and children. These civilian captives were taken to concent­ration camps where, weakened by malnutrition, thousands died of disease.

The Australians at home initially supported the war, but became disenchanted as the conflict dragged on, especially as the effects on Boer civilians became known. Nonetheless troops continued to arrive until the war ended in May 1902. 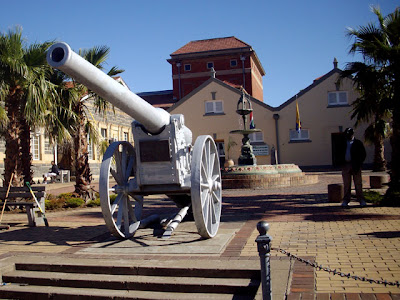 Some 16,000 Australians fought in the Boer War, of whom 282 died in action or from wounds sustained in battle, while 286 died from disease and another 38 died from other events. Six Australians received the Victoria Cross in South Africa. Yet there are very few memorials to the Boer War in Australia  apart from an equine Boer War statue, once in Edward St Brisbane and later moved to Anzac Square. I wonder if there are any memorials in other parts of the British Empire that sent soldiers to this war.

BBC History Magazine Jan 2013 suggested that people interested in remembering the Boer War should go to KwaZulu-Natal. It is possible to experience the eerie and poignant stillness of battle sites from the Zulu, Transvaal and Boer Wars of 1879-1902. And the Siege Museum in Ladysmith has relics, uniforms, maps and panels, that are helpful. Visitors to KwaZulu-Natal can stay at either the spectacular Isandlwana Lodge, set in the rocks above the battlefield, or the opulent Battlefields Country Lodge at Dundee.

Additionally there are several battlefield sites around the Bloemfontein area, so start at the Anglo-Boer War Museum, Monument Rd. It is believed that this museum is the only one in the world dedicated to the Boer War and gives the visitor insight into the war through its art collection, dioramas and exhibits. It also helps the visitor understand the background against which the war took place and what the life in the concentration and prisoner-of-war camps was like.

A fascinating part of Aus history.

I was interested to read of the eventual loss of public support here, & the large number of diggers succumbing to disease.
Cheers, ic

Perfect timing for ANZAC Day, Ian, although I wonder if the ANZAC name and the ANZAC legend can be used retrospectively i.e before 1914. I think the courageous spirit of defending Britain and the Empire against an enemy was in fact a constant.

I want to leave a comment on your post called Private Wars but I cannot find a place called Comments.

Hello Hels, Thanks for this overview of the Boer conflict. Even as an American I know that the war and its issues permeated all British society. I recall that Jerome K. Jerome even thought that people should be required to wear signs announcing themselves as either Imperialist or pro-Boer.

To change the subject, what do you think of the Judaica auction to take place next week at Sotheby's? Some very nice silver-work there. You can probably guess that my favorite is the Rouchomovsky piece!
--Road to Parnassus

Because the 1914-18 war was the first time Australian, New Zealand, Canadian and Indian soldiers fought as equals with Britain, I tended to think of the Boer as something individuals volunteered for. But I stand corrected.. it was a huge national effort.

Re the Judaica auction, there is an English silver LORD MAYOR'S DISH, presented by the congregation of Bevis Marks synagogue. I have lectured many times on the return of the Jews to Britain under Oliver Cromwell, and I know about lord mayor dishes. But I would sell my house if I thought I could buy that one.

The Boer War Memorial page said that the Prime Minister allotted a site in Anzac Parade Canberra to the National Boer War Memorial Association in memory of the Mounted Soldiers who fought in South Africa. All they need now is the money to build it.

Hello again, I was also admiring that Bevis Marks dish by Robert Hill, which combines historic importance with beautiful workmanship. It will be interesting to see how these pieces do at auction.

Hi Hels, even here in the UK Boer War memorials are quite scarce.

I can think of one here in Kent in Herne Bay where soldiers are commemorated on the town clock tower.

Individual soldiers (usually officers) are commemorated on plaques in churches and cathedrals.

I knew bits of the history, but it is good to have a quick read to link things together. We do have our own memorial to the Boer War and it is quite impressive. http://highriser.blogspot.com.au/2012/04/diggers-day.html

the ACT News in 2012 reported the design for the National Boer War Memorial to be built on Anzac Parade. It will be a bronze diorama consisting of four life-sized sculptures of Australian mounted troops in action.

The National Boer War Memorial Association has estimated the monument's final cost would be $4 million. *sigh* The oldest citizens to remember their grandfathers or uncles in the Boer War are now 85. How long should we wait?

I agree. I am passionate about silver, porcelain and treen antiques, but it is only worth spending a fortune if the object has important historical value as well.

Thanks for that. It is even more shocking for Britain since it was seen to be of utmost national importance to unify that part of the Empire. At the time! I suppose by the time World War One ended, noone cared about the Boer War any longer.

You noted that SOME individual soldiers were commemorated on plaques in churches, but naturally they were only the sons of families with enough money to do so. Boys from ordinary families were not buried back in Britain, nor were they memorialised in monuments and plaques.

right! "Only Melbourne" says: The Boer War Monument, located in St Kilda Road opposite the Victoria Barracks, was erected in 1903 shortly after hostilities ceased.

Made of sandstone with a bluestone base, the Monument was designed by the noted architect George De Lacy Evans and the sculpture was completed by Joseph Hamilton. The Monument is notable in that it was funded by the Victorian Mounted Rifles Regiment, rather than public subscription. It is the largest in Australia that commemorates the Boer War.

I forgot to say that this post did not start out life as a history of Australians in the Boer War. Rather I was responding to the BBC History Magazine's suggestion that people remembering the Boer War should go to KwaZulu-Natal.

It changed in mid stream because my students loved the post about Breaker Morant. http://melbourneblogger.blogspot.com.au/2013/03/why-did-breaker-morant-and-daisy-bates.html

A couple of years ago I read the book "Soldier Boy" telling the experiences (using his letters) of NZ rifleman Henry Gilbert during the 2nd Boer War. Yes, very much a guerilla war, but also the deprivations of living out on the Veldt, sleeping rough, fragmented supply lines, and the close camaraderie that developed hit home. But he wasn't left embittered after witnessing such inhumanity and the later compensation paid to the Boers, he became a Presbyterian Minister.

It is clear that individual soldier's diaries, letters and contemporary verbal reports are far more honest and moving than official government reports.

You were fortunate to find the Gilbert book...if only history students could read primary sources at uni.

thank you. I think the particular problem with the Boer Wars was that they had even _less_ justification than wars normally had, even in straight military terms. And although late Victorians and early Edwardians understood colonial power, they never really supported the two Boer wars.

Edwardian Promenade discussed American attitudes to the Boer War, as expressed in their newspapers in 1899-1900. "In the United States, sentiment was generally unfavorable to British—especially in areas of large Germanic or Dutch settlement in the American Midwest, where newspapers depicted the British as mired in a densely stupid policy.”

Many thanks for the link
http://www.edwardianpromenade.com/holidays/newyears1900/