The architectural style of Andrea Palladio (1508–1580) and his Renaissance villas was set out in his 1570 book Quattro Libri, showing a style that was calm, simple, sophisticated, bound by the rules of proportion and above all, planned.  Enthusiasm for the style was first seen in the writing of up-and-coming British architect Inigo Jones (1573-1652). In Vicenza Inigo Jones minutely examined Palladio's villas in person, then returned to England ready to introduce this classical architecture into England.

Jones' Italianised taste a la Palladio affected local architecture both directly and indirectly. He had a direct impact through the buildings he designed as Surveyor of the King's Works - the Banqueting House in Whitehall; Queen's House at Greenwich and St Paul's Covent Garden. Classical Palladian patterns were introduced into homes via fully integrated architecture, furniture and decoration. And he had an indirect impact, as a result of having travelled to Italy with the young Thomas Howard Earl of Arundel (died 1646). This was the man who went on to become one of the greatest patrons and art collectors of his era. 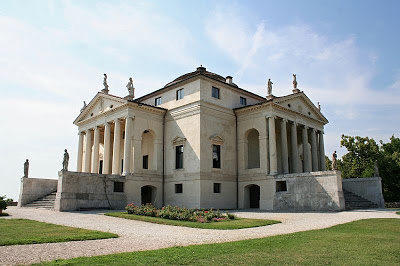 By 1700-1715, classicism was seen to meet the needs of politically ascendant Whigs for the ancient rules, rationality and a plain, serious style. Thus arguably the greatest era of arts occurred under Whig rule. After their Grand Tour, the great Whig patrons returned home ready to build, especially my old favourites, Lords Pembroke (1656–1732), Burlington (1694-1753) and Leicester (1697-1759).

These were honourable men for whom politics was more than a bunfight between vested interests. They believed that politics included ethics, art and aesthetics. And their politics laid emphasis on social duty, moderation, tolerance, stoical good sense, politeness, decency and the civilised virtues; a distrust of enthusiasms and of vigorous dissent. We can safely say they created a British Georgian style, using the Italian design of Andrea Palladio.

Once adapted to British taste, the Italianised villa was built on hills, giving emphasis to the long gallery and focusing on maximising the views. In Kent, Mereworth Castle was closely modelled by Colen Campbell on the most famous Palladian site, Villa Rotunda in Vicenza. In Derbyshire, Chatsworth House was an Elizabethan home rebuilt by the first Duke of Devonshire early in the C18th. The southern and eastern fronts of his new classical palazzo style building were designed by William Talman, while the west and north fronts were done by Thomas Archer. Talman was directly influenced by Indigo Jones and his books on Palladio.

Richard Boyle, 3rd Earl Burlington, had lands in Ireland, Yorkshire and fashionable NW London. In 1714-15 Burlington travelled through Belgium, Holland, Germany then Italy as a gentleman architect. For him, taste came directly from his Grand Tour and Palladianism. On his way home, Boyle stayed in Pisa Padua and Venice where he saw the Vicenza villas of Andrea Palladio. 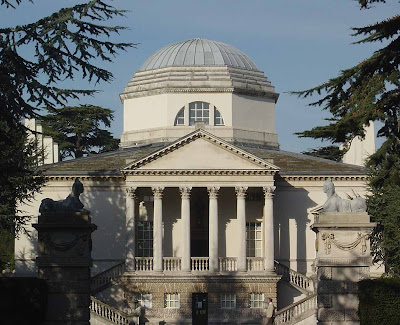 Chiswick House, London
designed by by Lord Burlington and William Kent
in 1729


So what was the charm of a 16th century Italian architect to early 18th century English Grand Tourists? In C16th Italy, Martin Randall Travels noted that a villa was a farm; in the Veneto agriculture it had become a serious business for the city-based mercantile aristocracy.  As the Venetian maritime empire gradually crumbled before the advancing Ottoman Turks, Venetians compensated by investing in the terra ferma of their hinterland.

But beauty was equally the determinant of form, though beauty of a special kind. Palladio was designing buildings for a clientele who, whether princes of commerce, traditional soldier-aristocrats or gentlemen of leisure, shared an intense admiration for ancient Rome. They were children of the High Renaissance and steeped in humanist learning. Palladio was the first architect regularly to apply the colonnaded temple fronts to secular buildings.

The beauty of his villas was not solely a matter of applied ornament. As can be seen particularly in his low-budget, pared-down villas and auxiliary buildings, there was a geometric order which arose from sophisticated systems of proportion and an unerring intuitive sense of design. It is little wonder that Andrea Palladio became arguably the most influential architect the western world has ever known.

Martin Randall Travel’s three tours of Vicenza in 2013 will cover most of the finest surviving Palladian villas and palaces, as well as some of the lesser-known and less accessible ones. Each tour takes six days.

I thank God for Palladio! These tours look potentially interesting, (although we're not normally "group tour" types), and I've yet to work out from a cursory glance what the costs include, and what the accommodation is like etc. But thank you for the heads up.

Hello Hels, One of the greatest achievements of architecture was the Classical sensibility as distilled through Palladio. In America Palladio's influence is often seen, during the Colonial period and also during the Italian Villa phase of the early 19th century. Later, the Palladian window (an arched window flanked by two rectangular ones) remained an almost constant design element, which lasted through the Colonial Revival period and beyond.
--Road to Parnassus

As you know, I am a particular fan of Georgian architecture and the Palladian style, so I was eager to read your post. Loved the social and political explanations for the architecture - David.

We visited Chiswick House in London. I don't know what it would have been like to live in, but as a reception space and collection display area it was amazing. Lord Burlington knew how to live.

I don't have any advertising nor do I provide any support for commercial ventures. But the Palladio tour was too good to not mention.

However Joe and I went on a Mediterannean cruise this past July that spent one full day (8 AM-5PM) of guided touring in each of five important island cities.

Not nearly enough time of course, but the guides booked the mini bus in each place and ensured we got into the most important sites, even those not open to the public.

One of the greatest achievements of architecture was indeed the classical sensibility as distilled through Palladio. You would think that any resident or visitor could simply examine extant classicial architecture in Italy with his own eyes. Yet it took Palladio to make it sensible for new audiences in the modern world.

I must look the Palladian Window up. I don't think I have heard of the term before. Many thanks.

It was quite revolutionary to see architecture as having a political value, agreed. But those Whig gentlemen architects spelled it out explicitly. Bless their hearts!

oh I don't know. I like to dream that politicians can have loftier goals, above and beyond personal aggrandisement and a great income stream. Silly me!

exactly! In fact I don't think Chiswick House was ever intended as a normal residence, with beds, children's toys, a washing basket full of dirty clothes etc. The Chiswick Trust says the house was a showcase for stunning art collections and a venue for delightful entertaining.

One of the best things about the UK is the wonderful Georgian architecture. Thanks for the great post about it's origin with Palladio.

Interesting that the client for the Villa Rotunda was a priest retiring from the Vatican.
Christianity certainly changed a lot from the early desert fathers living in caves in the wilderness!
But at least we can thank him for funding such an exquisite building.

a person can love gothic, baroque, art nouveau, deco or Russian Brutal, if it comes to that. But there is something civilised, symmetric and proportioned about Georgian architecture. It is how we like to think of ourselves.

nod. My favourite is Cardinal Scipione Borghese whose passion for collecting had to be provided for. So he built Villa Borghese in Rome in 1614.

Where would clerics put their amazing painting, sculpture and book collections, if they still lived in caves?

Palladian fans will want to examine Mereworth Castle in the blog called The Country Seat. The house was designed for John Fane, 7th Earl of Westmorland, by Palladianist architect Colen Campbell, and well worth visiting.

The Downeast Dilettante noted that for her new Palladian house in Manhattan, Mrs Bliss and her architects collected antique European interiors and architectural elements to provide the proper atmosphere for her collections.

And note that the American architects were still designing Palladian homes in New York in 1907.