In 1688 James II, the recently converted Catholic king was ousted by parliament in the Glorious Revolution. He sent his second wife and baby son to Catholic-friendly France, then fled himself into exile in France. King Louis XIV was only too thrilled to pay for the British court-in-exile in Paris.

But James never surrendered his claim to the British throne. Thus began a political and military struggle which lasted until the mid-18th century as the Stuart dynasty sought to grab back the nation they had been expelled from.

The strongholds of Jacobitism were the Scottish Highlands, Ireland and Northern England, places as distant from Parliament and the royal residences in London as possible. Therefore whenever King James or his family returned, it was always via Scotland, Ireland or Northern England. 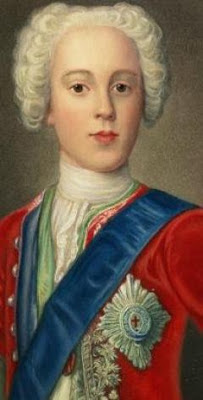 The most famous event in this long but episodic struggle occurred in 1745 when James II’s grandson, Bonnie Prince Charlie, led an armed invasion of Scotland and England. Charles' Jacobite army, which consisted largely of Scottish Highlanders, was defeated at the bloody Battle of Culloden in Scotland. No Jacobite uprising was ever attempted again.

Throughout the years of struggle in exile, the Stuarts continued to have many supporters in England and Scotland. Such support was naturally seen as treasonous by the ruling Georgians. So the Jacobites, the people who supported the son and grandson of ex-King James II, had to be very cautious about who knew their true allegiances. An elaborate system of symbolic practices was devised, hidden except from other Jacobite supporters.

Consider Jacobite wine glasses. Apart from the special engraving, Jacobite glasses look very similar to other wine and liqueur glasses of that period: mostly the viewer seens an elegantly simple shape on a long slim stem, often with an interesting element inside the stem. Stuart roses and Scottish thistles were often part of the engraved decorative scheme.


And another symbol. For the Jacobites, the identification of whiggery with the Rump Parliament, which had been fairly common in the 1680s, returned after 1715 for a new generation. As the Rump Parliament had killed a Stuart king in 1649, the cry Down With the Rump can be read as a call for a second Stuart restoration (see Monod, Jacobitism and the English People). I have seen a couple of Jacobite glasses with the words Down with the Rump, etched above the Stuart oak leaves and a budded rose.

And many historians talk of the Jacobite ritual involving passing the glass over a fingerbowl (full of water for diners to wash their fingers) before drinking. This was a reminder of the king over the water, in France. 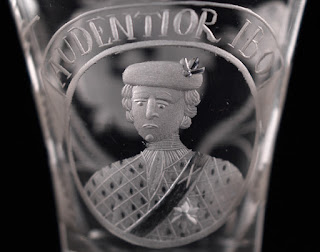 The National Museums of Scotland display subversive Amen glasses, called that because they were inscribed with verses from the Jacobite version of the National Anthem, which ended in the word Amen. The bowl of this 1750 example has a crown over the letters JR which are intertwined with the figure 8, a reference to King James VIII of Scotland.

Ian McKenzie and Geoffrey Seddon believe the most likely artist of the Amen glasses was the famous Scottish line engraver Sir Robert Strange. Most of the extant Amen glasses were engraved over the very short period in the 1740s, using a diamond point. Strange’s life (his marriage to an ardent Jacobite, his period of service in Prince Charles's army in the ’45 rebellion; his life in Edinburgh and his period in France) fitted the profile of the Amen glasses perfectly.

Some Jacobites were prepared to die for the cause while other families were prepared only to do the drinking part of the Jacobite ritual. Since the foot of the Amen glass in the photo is engraved with the words 'To the Prosperity of the Family of Lochiell', we know it belonged to the Fighting Camerons of Locheil, ardent Jacobites who definitely fought at Culloden. Nonetheless it has to be recognised that just having glasses with Bonnie Prince Charles images was, in and of itself, very dangerous.

The National Gallery of Victoria has a special exhibition of Jacobite glassware called Kings Over the Water, examining the practice of drinking toasts to their true king in France. The beautifully engraved glasses sometimes depicted a body of water, literally reflecting the English Channel, over which a raised drink saluted the old king and his dynasty. The NGV has put on the Kings Over The Water exhibition until June 2013, to explore the secret symbolism of these beautiful objects and to analyse a doomed political adventure whose history was seen as both romantic and tragic.

Since these glasses were passed around in secret societies devoted to the restoration of a Catholic monarch in all of Britain, we can expect they are now rare and expensive. Of the 37 glasses that are known to have survived, one fetched £43,000/Aus $68,000/USA $72,000 at Shrewsbury auction in Nov 2012.

I need to mention a 2005 exhibition called The Bonnie Prince Charlie and the Royal House of Stuart: works of Art from the Drambuie Collection in London. These Jacobite paintings and works of art consisted of 100+ works that included engraved glassware, grand court portraits, miniatures, silver and gold medals and ceramics. All of the works were, as you would expect, either small or easy to conceal, or featured symbolic designs and intentionally obscure inscriptions.

Mary Miers (Country Life, 15th Sept 2005) added one more consideration. The exiled Stuarts THEMSELVES patronised some of the finest court artists in Europe, creating portraits that were then copied by leading engravers and widely circulated among supporters. The exiled Stuart court actively became the centre of an elaborate cultural web from which emanated highly sophisticated works of art. The royals clearly wanted to keep hope alive among their passionately loyal supporters back in Britain. 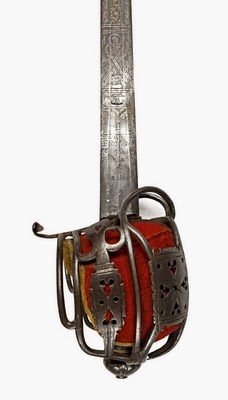 That makes sense with the basket-hilted sword, an early modern sword types characterised by a basket-shaped guard that protected the hand. The basket-hilted sword was a military sword, broad in contrast with the slimmer rapier, worn with civilian dress during the same period. It didn't come to be a symbol of Scotland and Jacobitism until the Jacobite Wars. The only surprise for me was that the blade was often made in Germany, with inscriptions proclaiming loyalty to King James. The enduring sense of Scottish nationhood that motivated supporters of the exiled Stuarts was clearly evident; the role played by German sword makers was not.

The exhibition How Glasgow Flourished is on at the Kelvingrove Art Gallery Glasgow until August 2014. The exhibition Imagining Power: the Visual Culture of the Jacobite Cause is on at the Scottish National Portrait Gallery in Edinburgh until the last day of 2015.

How interesting and the exhibition sounds like it is worth a quick look.

I saw your interest in Ungrateful Daughters: The Stuart Princesses Who Stole Their Father's Crown (Ci-Devant's blog). Well worth reading.

I am also looking forward to seeing the exhibition which opened to customers just this week. I am assuming there aren't going to be truckloads of glasses. But since the history, the conflict and the romance are the important issues, the exhibition might still be comprehensive.

I will definitely read the book, but even the title itself (Ungrateful Daughters: The Stuart Princesses Who Stole Their Father's Crown) is a bit of a worry. They loved their dad... they just didn't love his wanting to return Britain to Catholicism.

Hello Hels, What a great example of material culture reflecting political history. The story of Bonnie Prince Charlie and the Jacobites really comes to life when we can see (or even hold if we have an extra US$72,000 to spare) the actual glasses used to toast the exiled pretenders.

But it seems natural to me. People want to surround themselves with things they love and value.

*cough* the monetary value now may be a bit steep for us ordinary citizens.

Love the Stuart's...the Windsor family just don't intrigue me as much.

Oh agreed. The Stuarts were such a significant dynasty that we really have to treat pre-civil war and post-civil war eras separately.

I have added a reference to the 2005 exhibition called Bonnie Prince Charlie & The Royal House of Stuart. All the works came from the Drambuie Collection of
Jacobite Art, appropriate since Drambuie was first made by a Jacobite forbear, Capt Mackinnon of Skye.

"Imagining Power: The Visual Culture of the Jacobite Cause" is a dramatic exhibition that considers the Jacobites - those loyal to the deposed Stuart dynasty at home and abroad. The Scottish National Portrait Gallery has the most extensive and significant collection of Jacobite visual material in the world.

The exhibition will close on 31st December 2015

Examine the role of basket hilted swords in Scottish Jacobite symbology. Note the blades were made and engraved in Solingen in Germany.

Two great references, many thanks. I will add notes to the post straight away.

I appreciate the reference to Imagining Power: the Visual Culture of the Jacobite Cause. I had a really good look at the Jacobite artefacts on my recent trip to Scotland but why is the exhibition in Glasgow?

the 539 objects on display depict the endless battles between the Jacobites and the British people, from the 1689 uprising to the Battle of Culloden in 1746. The objects come from collections all over Scotland, public and private.

Glasgow was never a Jacobite stronghold; it was always strongly Hanoverian. But the Imagining Power exhibition is in Edinburgh.

See a Jacobite finger bowl engraved with a portrait of the Young Pretender. It was both functional and politically attuned to Jacobite sentiment.

Thank you. I never understood what "passing the glass over a bowl of water before drinking" meant. The bowl of water was of course a finger bowl, used by diners to clean fingers after a messy main course, before sweets were served!!