Lovely tea rooms emerged in Britain in the late C19th. Staffed by smart waitresses in black uniforms and serving tea and cakes, tea rooms were patronised by a new class of clientele. Classy enough to attract well dressed women, but not beyond the budget of the new working women who were being increasingly employed as office workers in the big cities. These were places women could comfortably visit, with their husband or women friends, or even alone; their presence was seen as perfectly respectable.

None was more successful than the Lyons Tea Rooms group. The Salmon and Gluckstein families, struggling Jewish families from the Netherlands and Germany respectively, had had a tough time in the East End of London. They weren't naturalised as citizens until 1861.

The two families worked extremely long hours in Aldgate High St; until 1887, their business interests united in the firm of Salmon & Gluckstein, tobacco manufacturers and tobacconists. So it would be interesting to know why the two families wanted to diversify into NEW business interests (catering). Initially the two men funded the food business, and eventually J. Lyons & Co. Ltd was registered as a limited public company. The first directors of the 1894 J. Lyons & Co Ltd were:

Isidore Gluckstein (1851-1920) was the accounting genius who took over the family tobacco interests of Salmon & Gluckstein when his father died in 1873. Isidore’s brother Montague Gluckstein (1854-1922) became the Chairman of J Lyons & Co in 1917. It was Montague's idea to branch out of cigarette and cigar manufacturing and to diversify into catering. He was a fine businessman and oversaw the firm’s growth to the largest food producer in Europe.

Sir Joseph Lyons (1847-1917) was a talented and successful water-colour artist. As a teenager Joseph Lyons wrote short plays and sold them to the theatre goers at the Pavilion Theatre (where he met his theatrical wife). But it was while he was running a stall at the Liverpool Exhibition in 1887 that he was first approached by his cousin Montague Gluckstein to join them in the new catering venture. Sir Joseph was made Chairman of J Lyons & Co in 1887.

Sir Joseph was only a cousin of the original and most hard working of the directors. So I have to assume that the tea rooms were named "Lyons" because it was more acceptable to English ears and less foreign sounding than "Salmon and Gluckstein".

Alfred Salmon (1894-1928) was the eldest son of Barnett Salmon and eventually became Managing Director. One of his grandchildren, Vanessa Salmon, married the Chancellor of the Exchequer in Margaret Thatcher's government, Nigel Lawson. Their daughter, Nigella Lawson, became very famous in her own right. 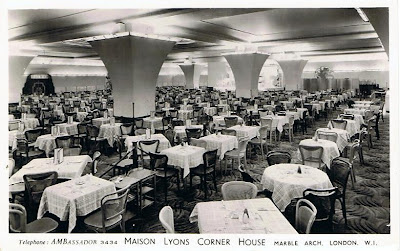 The first tea room opened in 1894 and was soon followed by 250 other modest tea houses. The first impressive Corner Houses first appeared in London in 1909 when Lyons opened huge restaurants on four or five levels, each staffed by some 400 workers. Each floor had its own restaurant style, and all had orchestras playing to the diners almost continuously throughout the day and evening.

The Corner Houses were particularly fond of modernist architecture and decoration, eventually specialising in an art deco style. The ground floor was usually taken up by a large food hall where many speciality products from the Corner House kitchens could be bought.

In 1938, Lyons purchased the Bee Bee Biscuit Company in Blackpool, and changed the name to Lyons Biscuits. But in my memory, it was the cakes and pastries that stood out.

There were three Corner Houses in London: Coventry St, Strand and Tottenham Court Rd. The two Maison Lyons were at Marble Arch and Shaftsbury Avenue. After WW2 a new type of restaurant opened called the Steak House, popular in the leafy, prosperous suburbs. Some were opened further afield in the prosperous towns like Tunbridge Wells, Brighton, Bristol, Norwich and Gloucester.

Lyons began to close some of its London tea shops and hotels in the early 1960s, caused by economic circumstances and changing eating habits. I have no doubt that the Edwardian Period, loosely defined as 1900-1914, was the actual peak of tea room culture. Nonetheless I was still besotted with these lovely old sites in the middle 1960s. 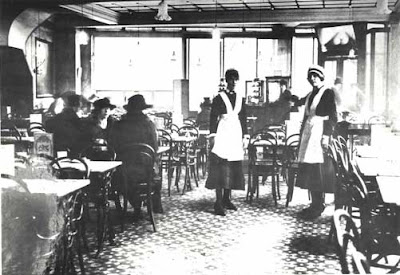 Hello Hels:
We are of an age to remember Lyons Tea Rooms and London Corner Houses clearly and with great clarity. The branch in Southampton lasted, if we recall correctly, well into the 1970s but by then was self service and generally considered to be a little on the seedy side.

Certainly in their heyday they were exceedingly popular with the waitresses universally [or at least nationally] known as 'Nippies'.

we had beautiful tea rooms here in Melbourne that were said to copy Lyons Tea Rooms.. down to the food, table linen and waitresses uniforms.

My first visit to London in 1966 was not a disappointment at all, but that era seemed to be the beginning of the end for the truly original Lyons, didn't it?

Hello Hels, In America during the same period, many small tea rooms were the salvation of old houses, because the tea rooms could insinuate themselves into the existing architecture, and could feature their old-fashioned charm in an age when many people drastically altered such buildings or simply obliterated them.

My Aunt loved these type of tea shops and old-fashioned restaurants, and she had an uncanny ability to seek out surviving examples. She knew of places that I didn't even suspect still existed, and which were like stepping back into the past.
--Road to Parnassus

Hels, you should have mentioned to Jane and Lance that we still have one surviving tea room. http://www.hopetountearooms.com.au/

Perhaps one day you could write a post about why Jewish people from Europe went to start new lives in London in 1800s?

In the 1950's, my mother, grandmother, and I went to a tea room regularly. There was great ceremony to being seated and in the serving of the tea - a four-year-old's delight!

thank goodness that tea rooms could feature their old-fashioned charm, if for no other reason than to save stunning old buildings.

There really was something very charming, traditional and the best of Edwardian in such places, long after their original era. I think sometimes we crave old fashioned charm.


that's a very cool place :) My personal favourite in the 1950s and early 60s was Georges in Collins St.

There are still old fashioned tea rooms in Australian cities and rural towns, but somehow they don't have the cachet that Lyons used to have. Or the customer base isn't there for them much, these days.

I remember that soooo well. My grandmother, mother, mum's two sisters and I loved the tea rooms. But the boys were never invited! Perhaps boys couldn't sit still long enough.... perhaps they smelled of sweat.

Did the women in your family wear gloves when they went into the city for shopping and afternoon tea?

I wrote a post on the Pale of Settlement that starts to explain why people would want to leave Russia, Ukraine, Lithuania, Latvia, Belarus etc. See http://melbourneblogger.blogspot.com.au/2009/10/jewish-pale-of-settlement-in-russia.html

Would you be interested in a guest writer in your blog about why those very same people went to the East End of London?

Sadly, I missed out on Lyons Tea Rooms. However, whenever I'm in York or Harrogate, I make sure to visit Bettys Tea Rooms which are famously lovely.

Yes, gloves, hats, stoles - it definitely was occasion for dressing up. My grandmother especially loved her hats!

you missed out on nothing :) The whole movement towards comfortable, respectable places for female office and shop workers, and for women doing shopping/afternoon tea, started in the late 19th century _everywhere_. Betty's tearooms in York (I don't know their others) is still a great pleasure.

I know thoughtful women wore hats and gloves when they went into town, at least until 1960 or so. But when I was writing about The Willow Tearooms in Glasgow, it occurred to me that the waitresses' uniforms were equally as important in setting the right ambience.

I just read the link. So there was discrimination in Russia too. I'd love you to write a guest post.

This is a lovely article, I just had to share it among all my tea loving friends! I agree with you, as I was reading about Salmon and Gluckstein, my immediate thought was that they chose Lyons as it was so much more acceptable to English ears. My husband is a big fan of Nigella Lawson (although possibly for not the reasons I'd prefer) so I was happy to tell him of her ancestry.

I know what you mean! My middle aged husband never watched cooking programmes on tv until Nigella Lawson started. Then he watched every single show she made! There is something so... so.... earthy about her :)

I knew about her connection to the Lyons Tea Rooms four years ago, from Who Do You Think You Are?