Portrait miniatures became very popular in the C17th so that men might carry an image of their wife and children while travelling away from home, or a young woman could give her fiance a very special gift at marriage. The first miniaturists used watercolour to paint on stretched vellum. During the second half of the C17th, vitreous enamel painted on copper became increasingly popular, as did watercolour on ivory in the C18th. Whatever the material, portrait miniatures remained tiny, perfectly painted and jewel-like. And expensive. 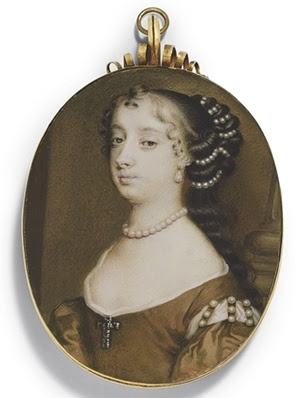 Christie’s Spencer House Sale (July 2010) included lots of items that caught my eye, but one in particular that I would love to have bought - a fine portrait miniature of Barbara Villiers, Duchess of Cleveland, painted by Richard Gibson in the mid 1660s. Alas I didn’t have the necessary USA $45,522 to win the bidding war.

The Duchess was wearing a gold dress with puffed sleeves, slashed to reveal white underdress and fastened at shoulder with three pearl-set bands. She had a diamond-set crucifix worn at corsage, pearl necklace and drop-pearl earrings and partly upswept dark hair dressed with further pearls. The background was non-specific, except for a pillar.

Like all beauties at court, the model was depicted as if she just got out of bed from a spot of mid afternoon delight – dressed in a house-dress with masses of auburn hair, slanting and heavy-lidded eyes, creamy skin and a sexy mouth.

The miniature was done in watercolours on vellum, inside an oval, gilt-metal frame with spiral cresting. According to a catalogue from a 1974 exhibition called Samuel Cooper and His Contemporaries (D Foskett, London, 1975), this miniature was by family descent from Robert, 2nd Earl of Sunderland, who was the grandson of William, 2nd Baron Spencer. It is only 9 cm at its longest.

Barbara (1640–1709) had come from ennobled families on both her mother's and father's side, but she didn't hit pay dirt until she became King Charles II's mistress in 1660. At that stage she still theoretically married to Roger Palmer, although they separated in 1662. As a reward for her services, the King made her husband "Baron Limerick" and "Earl of Castlemaine" in 1661. Palmer was certainly laying down his wife for his king and country.

The court of King Charles II must have been very busy indeed - Barbara was openly and famously one of his long term mistresses. Together they had (at least) five children, all of whom he acknowledged and gave titles and land to. In June 1670 Charles created her Baroness Nonsuch and owner of Nonsuch Palace. Then he showered her with titles, making her "Countess of Castlemaine" and "Duchess of Cleveland". 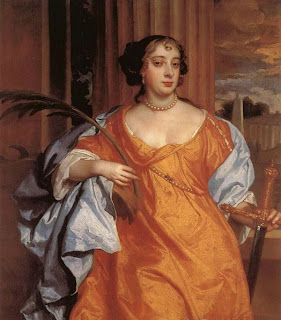 Barbara Villiers, Duchess of Cleveland,
painted by Peter Lely in 1666

King Charles' wife, Queen Catherine, became even less impressed when Barbara was appointed Lady of the Bedchamber in 1662, despite opposition from the Queen and her advisors. Queen Catherine was certainly aware of King Charles long line of mistresses and illegitimate children, so the last thing she needed was Barbara waking her up and dressing her every day. History does not record what the other royal mistresses thought - Louise de Keroualle, Nell Gwynne, Duchess of Mazarin and the others.

In Dec 1663, Barbara decided to convert to Catholicism, possibly in an attempt to consolidate her position with the King. Or perhaps to reconcile with her Catholic husband.

Other stunning portrait miniatures were painted in the C17th by the Hilliards, Peter Cross, John Hoskins, Samuel Cooper, Thomas Flatman, Cornelis Janssens van Ceulen-Johnson and the Olivers. Since the world of portrait miniatures was rather specialised, it did not surprise me in the least that several of the finest artists were closely related: Nicholas Hilliard was succeeded by his son Lawrence Hilliard (died 1640); his technique was similar to that of his father, but bolder and more colourful. Isaac Oliver and his son Peter Oliver (died 1648) succeeded Hilliard. John Hoskins (died 1664) was the uncle and art teacher of Samuel Cooper.

For some lovely examples of portrait miniatures, see the blog A Private Portrait Miniature Collection.
Posted by Hels at 10.11.12

Hello Hels:
Miniatures, such as the ones which you show and describe here, hold a particular fascination for us too most likely on account of the fact that those which are considered to be 'good' are so beautifully painted and with an eye to the smallest of details.

What happened to poor old Roger Palmer? I feel quite sorry for him.

I couldn't agree more. Of all the visual arts, miniature portraits were the most exquisite. It is said that the artist only used a few hairs in his paint brush, but that even then, you could still see every eye lash individually articulated.

For families with money, there could be no nicer way of having portaits of a loved one in pre-photography days. I leave my miniatures out on display, but they really should be kept in a closed draw, each one sitting in its own velvet-lined niche.

Roger was born into two noble families, so he didn't get his titles ONLY through his wife's long service to the king. And he became a parliamentarian through his own endeavours.

However he got into lots of trouble in life due to his devout Catholicism and his stance against the Protestant Glorious Revolution.

Wow, I read most of this article with my mouth open. I had no idea that King Charles II had so many mistresses! Then again, I'm thinking maybe I didn't pick up on the insinuations in some of the numerous tours I've taken. He was the Merrie Monarch, wasn't he?

I have a great appreciation for miniatures such as this. The level of detail is often quite incredible.

Hello Hels, Barbara Villers was a remarkable woman, and she shows quite a bit of attitude in these portraits.

Miniatures do have a special fascination. One was used as a symbolic plot device in Nathaniel Hawthorne's House of the Seven Gables, in which the particular qualities of portraits by the real miniaturist Malbone help to develop the character of Clifford Pyncheon.

Emm
I cannot tell if Charles II was the Merrie Monarch because he came after the dreary misery of the Puritan Commonwealth or because he couldn't keep his trousers zipped up.

He was democratic about his mistresses - many were courtiers from noble families, but equally he loved actresses with lovely faces and figures.

Some of Charles II's illegitimate children were born before his marriage, but they are harder to trace. The many children born after his marriage to the infertile Queen Catherine of Braganza were acknowledged, looked after and are easier to trace.

you are the most amazing source of literary references. Thank you so much.

Since a portrait miniature was used as symbolic plot device in a mid 19th century novel, it means the ordinary reading public would certainly have known about miniatures. Hawthorne would not have used a device that noone recognised.

True true. Intrigues at court happened in every generation. Noblemen tip-toeing around at night, looking for their mistresses chambers, is also not new.