I am not a scholar of colonial Australian history, so I did not necessarily expect to enjoy the book Duelling Surgeon, Colonial Patriot: The Remarkable Life of William Bland. However since many of the people in my immediate family are medicos, the topic became very relevant.. in a personal way. Would that be so for another book on Sydney’s colonial era, Southwark Luck (published in South Melbourne in 2012) by Louise Wilson? Yes!

Charles Homer Martin (1795-1886) was born in Southwark, South London. The family lived outside the centre of town, presumably to avoid the expensive licensing fees charged by the City on businesses in their territory. His father chose a busy road as the site for his business, selling food and alcoholic drinks to travellers and to the coaches’ staff.

Charles found plenty of work in the busy rope-making industries of Southwark, both for the navy and for the merchant ships. So why did a reasonably educated, well employed lad, just out of his teens, come to such grief with the Law? He was arr­ested for the highway robbery of Richard Coster, himself a criminal of some note, in March 1818. The book provides evidence from the court case and details of the (capital) punishment, but what we need to know at this point is that Charles Martin found himself on a hulk in June 1818. Justice was swift in those days!

Charles arrived in Australia when Governor Macquarie was making his mark on the colony (Jan 1810–Nov 1821) and was transported to Newcastle. Charles soon returned to Windsor in the Hawkesbury district, via the Hyde Park Barracks, and applied to be married in Feb 1822. When had he had time to make his teenage bride, Annie Forrester, pregnant? 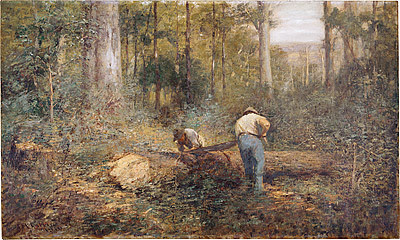 Delivering lots of babies might have been dangerous for young women, but Annie got stuck right into it. She stayed alive herself and she delivered 12 live babies, 11 of whom survived into adulthood. How did this working class family support and educate their huge, young family? Clearing forests and sawing timber, it would seem. It was a tough life, but they wanted a more educated, more secure life for the next generation.

Since arriving as a convict for life in Dec 1818, it remarkably took until 1834 be­f­ore Charles Martin was given his Ticket of Leave. This represented only partial freedom, presumably because he was involved in some sort of inability to run a business properly. He was back in court again, in 1838. Charles did not receive his Conditional Pardon until mid 1841! That did not protect him from additional insolvency cases, of course, but it did improve the quality of their lives in Wil­­berforce, one of the original settlements established as a town by Macquarie. 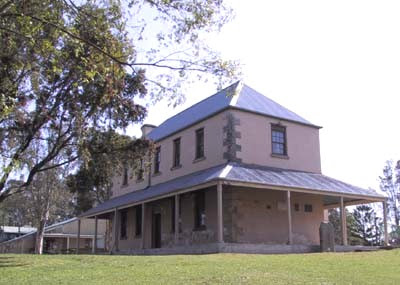 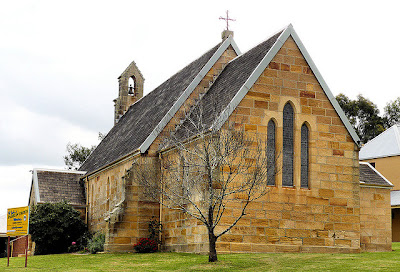 St John's Anglican Church and school, Wilberforce.
The school (top) was originally built in 1819. The church (bottom) was added in 1856

The chapters on the Forrester brothers-in-law, Charles’ children and their spouses, floods, voting and the Law are very interesting, but there is not enough space in this review. Clearly Charles Martin had a tough life, yet he reached the ripe old age of 91. Annie died just two years later, in 1888, and was buried next to her husband. She had been the grandmother of 94 grandchildren!

My interest was piqued in Charles and Annie’s story, and I will follow their experiences in whatever official records I can find. But Wilson’s book is also rich in information about their children and grandchildren. You can follow the careers of Jane and Frederick Nicholls, Elizabeth and Philip Devine, Isabella and William Dolley, Margaret and Alfred Bushell, Lucy and James Graham, Mary and John Daley, Charles Robert Martin and his wife Ann, William John Martin and his wife Mary, Susannah and William Norris, Martha Martin, Emma & George Greentree, and the bachelor brother Henry Martin.

The book’s cover notes this is the third in a series about important pioneers of the Hawkesbury. The three books together create a set, each featuring on their cover a scene of the farm where the families lived - Robert Forrester, Paul Bushell and Charles Homer Martin. In this book, I particularly valued the photos that added a rich commentary to the text. There is nothing quite like “seeing” Rose Cottage as it appeared when the family arrived or Wilberforce’s Church of England church and school house. Only the General Index was tricky to use.

Southwark Luck is an ironic title, very suitable since Australians love irony. Ear­ly Australian life, particularly during the colonial years, was not easy, and Charles may not have liked being sentenced to a convict’s life at the end of the known world. But he really was a fort­unate soul. The early years that he spent in Southwark were no walk in the park.

Your lectures on Francis Greenway and William Wenthworth were important for me because I hadn't heard any early Australian history since primary school. Most of your students agreed it was a shame Australian school children don't know their own history now.

I wonder how many primary school students in this country today know about Burke and Wills, Blaxland Wentworth and Lawson, Gov Lachlan Macquarie, the Eureka Rebellion etc etc. How pathetic :(