York-born Joseph Aloysius Hansom (1803–82) became apprenticed to a local architect as soon as he could. His younger brother, Charles Francis Hansom (1817–88) also became an architect.

I was very impressed with the prolific output of Joseph Hansom. Hansom and Welch were chosen as the architects for Birmingham Town Hall. Construction began in 1832 but sadly Hansom went bankrupt during construction, having tendered too low. It eventually didn’t matter since the building was completed in 1834 and still looks terrific now, especially after its very expensive 1996 refurbishment.

Hansom tended towards the favourite taste of Victorian Catholic designers, Gothic Revival. If I had to select just one of Hansom’s many religious buildings, I would chose Plymouth Cathedral. In 1850, under Catholic emancipation, Plymouth became the centre of the archbishopric covering Cornwall, Devon and Dorset. So land was bought in town for a new cathedral in February 1856, and Joseph Hansom and Charles Hansom were the architects chosen to design the building. This time the work proceeded smoothly and the Cathedral was opened with Mass in March 1858. It served the region well, until the building was bombed in 1941. 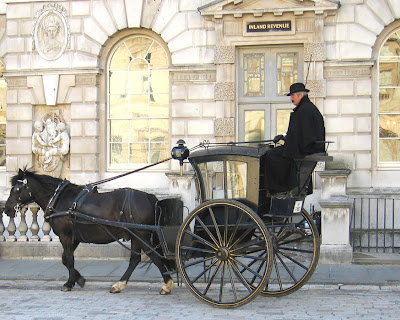 Hansom Cab
In all, this architect designed some 200 buildings. Hansom was particularly responsible for designing schools, churches, university buildings, theological centres and libraries.

But until I read Country Life magazine (25th July 2012), it did not occur to me that this was the architect whose name went down in history, not for churches but for taxis. In December 1834 Hansom registered the design of a Patent Safety Cab, soon called the Hansom Cab.

I understand that the Hansom Cab was specifically designed to combine speed with safety, with a low centre of gravity and large wheels, both for turning around city corners with ease. But what happened in 1834 that impelled a busy architect to leave his buildings for a year or so, to focus on a technological problem outside his normal area of expertise? 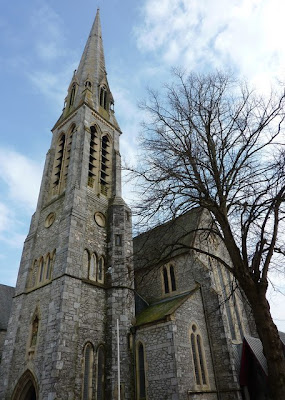 His cab replaced the hackney carriage as a hire car. And with the introduction of a mechanical meter to tot up the fares, the name became taxicab. Important safety features included a suspended axle, while the larger wheels and lower position of the cab made travel more comfortable. The Hansom cab was modified, adapted and soon much loved. Being dependent on a single horse was essential, since it made the cab both lighter and cheaper to run. The cab could carry 2-3 passengers, plus a driver who sat on a seat behind the vehicle. The passengers communicated with the driver via a hatch in the hood.

To summon up a cab was simple, as Conan Doyle explained. A shout or whistle would bring one trotting up, if there was not already one at the curb. A hansom was often necessary in Dr. Watson's profession; he liked the fashionable cab-whistle many Londoners carried. One blast from such a whistle would call a four-wheeler, two a hansom. A hansom was even more necessary in Sherlock Holmes' profession, but he favoured vocally hailing cabs, as can be seen in his books. The speed with which it delivered Holmes to the scene of the crime was of course vital. Of the sixty recorded cases of Sherlock Holmes available today, nineteen contain specific references to hansom cabs.

The first Hansom Cab was seen first in London in 1835, then in other British cities, and even cities outside Britain. I love the idea that in elegant cities like St Petersburg, a York-born invention was attracting the crowds and fitting into the local cityscape. But after WW1, horse drawn cabs had had their day. The city streets were instead being used by motor vehicles.

Although this blog post was written months ago, its publication coincides beautifully with the filming of The Mystery of a Hansom Cab, a mystery fiction novel by the English author Fergus Hume. The story was set in Melbourne in 1886, telling of a mysterious murder involving a body discovered in a hansom cab. If you consider the title of the novel, the image on the book's front cover and the fact that the author chose my city (Melbourne), this is definitely Life copying Art. 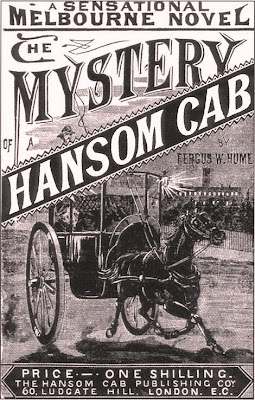 I knew nothing of Hansom Cabs, especially relevant with the forthcoming ABC tv show, Mystery of a Hansom Cab. It is a great book and I hope tv does it justice.

Bloody amazing timing, Andrew. I had never seen the ABC tv programme being advertised yet you are 100% correct - at 8:30pm Sunday, 28th October!!

The trailer says "Set in boom-time Melbourne, 1886, two gentlemen climb into a hansom cab late one murky night. One man climbs out, the other continues his journey. On arrival, the driver finds the second man dead; murdered. The high-society killing sends shockwaves through the young city, still flush from its gold-rush boom".

I love the idea that everyone in 19th century Melbourne was very familiar with hansom cabs. Plus I think goldrush Melbourne was the most interesting part of Australian history, before Federation.

Another fascinatingly diverse article - as always. Little wonder you have 438 followers!

Hello Hels, I found the safety aspects of Hansoms most interesting. Although in this high-speed age we may view as quaint the dangers of riding in carriages and horse-drawn vehicles, they were and are very real, what with overturned carriages, runaway horses, etc.

18th century novels were replete with hazardous carriage rides, and the one that perhaps best dramatizes the physical and social dangers to both serious and comic effect is Fanny Burney's 'Evelina', one of my top-favorite novels.
--Road to Parnassus

Thank you. There is almost no aspect of history, art and architecture that doesn't fascinate me. My only self imposed limits are geographical and temporal.

Diversity works well on the computer because it is simple to create links from one post to the others. But links disappear when the posts are published in hard copy, alas.

I love your references to 18th century Enlish literature (in this and a previous post). Novels are often more honest about the physical and social dangers faced by citizens than are governmental and council records.

While I have not read Fanny Burney, you can see a great reference to Sir Arthur Conan Doyle in the post.

I know Hansom's name because he was responsible for The Builder, a very broad and interesting weekly journal that started in the 1840s.

Hansom was one of those gifted Victorian polymaths who succeeded at whatever he turned his hand to, including his architectural journal. Except make money :(

I imagine that is why he turned to inventing (see Nick Jones in building.co.uk). In 1834 he submitted his cab design to the Patent Office. Soon the Safety Cabriolet & Two-Wheel Carriage Company was formed with capital of £100,000 (£4.5m today). At last! Financial success!

After Andrew's comment, I went back to examine the novel The Mystery of a Hansom Cab by Fergus Hume, 1888. The novel went gangbusters and apparently outsold the Sherlock Holmes book, A Study in Scarlet by Arthur Conan Doyle, published at almost the same time (1887).

The novel was very well reviewed by the bibliolathas blog in http://bookforgetter.blogspot.com.au/2012/06/review-mystery-of-hansom-cab.html

I love this post!!! I never even registered the name of the Hansom cabs, wondering instead f it was a play on the word "handsome". Of course it isn't, I should have known about the old tendency to name inventors to describe their inventions.

It sounds like a really well desgined mode of transport!! I loved your Sherlock Holmes references!

Emm
oops, my badly written sentence re Birmingham town hall's architectural style. I will change it immediately. And Manchester's town hall, which really was gothic revival, was not designed by Hansom.

Parnassus and Chris provide great links between historical evidence and literary references. I am beginning to love them too :)

Outstanding information, i must say this site is really cool.
USA Taxi Services

thank you. He was not a simple, straightforward man, was he? He did well being the architect for schools, churches, university buildings, theological centres and libraries, but perhaps he craved something new and exciting. Don't we all?

Wonderful Design Blogs, Such a great list. Thanks for sharing all these blogs all are very useful to every one.
Transportation from and to PHL airport

Brillant piece of information to know about the history of Hansome cab and the post is too impressive to read, thanks a lot for sharing!
Regards, cabs in hyderabad

Brilliant piece of information Thanks for sharing Keep it up.
Silver Service taxi in Melbourne

Such a great blog keep it up.

chauffeured cars
Hey i am for the first time here. I came across this board and
I find It really helpful & it helped me out much. I hope to offer something back and aid others like you aided me.