Evian Conference on refugees, July 1938. What a disgrace!

A Conference on German and Austrian Jewish refugees was held in Évian-les-Bains in July 1938. Parliamentary delegates from 32 countries and from relief organisations, met in the southern French spa-town for discussions.

Most countries sent a high level member of Parliament, usually the foreign minister. President Roosevelt announced before the conference that no country would be expected to alter its laws, so the USA was not represented by any minister. However Roosevelt DID ask a friend of his to pop in to the conference, if he was available. It wouldn’t have helped in any case. The Wagner-Rogers bill, presented to save the lives of 20,000 Jewish refugee children, was not supported by the American Senate in 1939 and 1940. 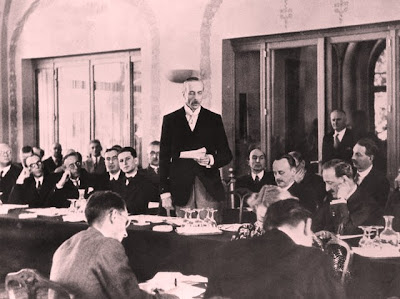 Speeches were made at Evian. Photo credit US Holocaust Museum

The Australian delegate to the Evian Conference was the Minister for Customs, Colonel Tom White, whose speech which has become notorious as representing the negative attitudes taken by most delegates at the conference. He said: “Under the circumstances Australia cannot do more. Undue privileges cannot be given to one particular class of non-British subjects without injustice to others. It will no doubt be appreciated also that, as we have no real racial problem, we are not desirous of importing one.”

New Zealand's delegate described Evian as "a modern wailing wall." The French, Belgian and Dutch representatives said that their countries had already reached "the extreme point of saturation as regards admission of refugees".  Canada's delegate, the foreign minister, insisted that Canada's high unemployment precluded the admission of great numbers of refugees. About the refugees, he said, "none is too many."

The nations of the world, especially the New World, could have saved lives at Évian, but they offered little more than token gestures. Australia set a quota of 8,000. Our practice was marginally more generous than our rhetoric, and eventually we took in a dismal 10,000. Compare this with other dismal quotas: Canada 8,000, Britain 65,000 and the USA 190,000.

Australia was a large and very thinly populated country which obviously could have accepted many more refugees, had the political will been there. By contrast, the only nations at Evian who set larger quotas were the poorer nations: Argentina took 50,000, Paraguay 20,000, Chile 14,000, Bolivia 12,000 and Cuba 4,500. Even then, not all these quotas were actually filled because emigration became impossible after September 1939 when war broke out. But the hero of the conference was a tiny country that was willing to open its doors and let Jewish settlers in - the Dominican Republic.

Australians DID criticise the Evian outcome. Sydney Morning Herald editorialised: “There cannot but be disappointment with the negative nature of the speech made by the Australian minister. It is a truism that the Commonwealth has no racial problem and no desire to import one. On the other hand it prides itself on being a democracy with a strong tradition of tolerance, and any undue suggestion of racial intolerance constitutes a betrayal of our cherished traditions.”

So what were the results of the Conference? Firstly the conference decided to establish an Inter-governmental Committee on Refugees, which was to continue to research the refugee problem. What research, one asks, was there yet to be done in late 1938?

Secondly there were half a million Jews in central European who could have been saved, if the international community had been prepared to act firmly, even as late as the beginning of 1939. The conference ensured that these families were locked into Nazi Germany and Austria, and would never escape alive.

Even after the ministers and their staff left Evian, there were still a couple of opportunities to save young families. Woolly Days blog tells of how The SS St Louis set sail from Hamburg in May 1939, with its cargo of 900 refugees for Havana. Cuba had already issued visas in advance, but by the time the boat landed in Havana, the government had changed its mind and refused to allow the refugees to land. The boat then drifted off Florida waters before it became obvious US authorities were not going to allow it to land either. The captain was forced to set sail back for Hamburg. 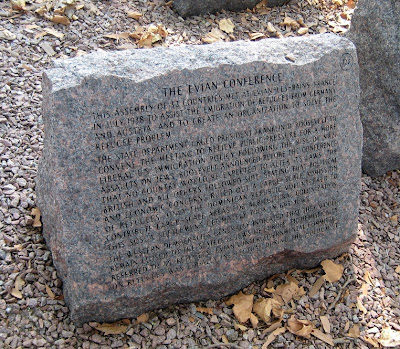 These deaths remain a dark stain on the collective conscience of the western democracies. Thankfully a  permanent Holocaust Memorial Park was officially completed and dedicated in 1997 by Mayor Rudolph Giulianni of New York. I don't think the engraved historical narrative is accurate but at least we can be proud that one of the granite markers memorialises the shocking events at Evian.

Even after nearly 70 years, Michael Danby MP (Federal Member for Melbourne Ports) reminded us to ask ourselves how was it that so few Jewish adults and children were able to escape while so many were left to die. Through a combination of good luck, desperation and the unpredictable generosity of others, only a small fragment of the doomed Jewish population of Europe was able to escape in time and find refuge in other countries, including Australia. Australians need to be honest about our past and we also need to be honest about the tragedy of refugees in the current era.

Hello Hels:
This is indeed a very shameful account of the failure of so many governments to act in any way substantially to assist in the plight of the vast number of Jewish people trapped in Europe in the years immediately preceding the outbreak of war. And, in July 1938, when there must have been more than an inkling of what was their likely fate, still little was done.

The story of the refugees bound for Cuba, and refused entry despite pre issued visas, is just another horrific tale to be added to those others of a similar nature.

How awful that the boat had gone so far and then had to return to Hamburg. I can imagine the distress of those on board.

The difference between the Jews of Europe back then and our refugees now is that the Jews would have happily settled in any vaguely civilised country where they were offered sanctuary and not risk their lives by pressing on to a rich western country.

I was surprised to read recently that Bulgaria, though a fascist dictatorship and part of the Axis, gave sanctuary to Jewish refugees, and refused to send its Jewish population to the death camps despite intense pressure from Nazi Germany. This fact was suppressed after the war because no one wanted to be seen to be giving credit to the Bulgarian regime, not that they deserved credit anyway, that should go to the Bulgarian people and some influential clerics in the Bulgarian Orthodox church. Apart from Denmark they were unique in having saved their Jews. Almost all of them pressed on to other countries as soon as possible nonetheless, and rightfully so.

There is something very smug and arrogant about well dressed, well fed middle class gentlemen who thought that "none is too many" about refugees. Even if Western nations didn't want to accept working families, they could have accepted academics, scientists, professionals and business families. To the advantage of the recipient nations!

You are so correct. Refugees were delighted to get visas into Siberia, Uzbekistan, Cuba, Columbia, Harbin, Shanghai, Dominican Republic or anywhere that wasn't part of the Nazi empire.

How amazing that western historians know everything about the effort in Denmark to save its own Jewish citizens (and took in Jews from other countries), but not about Bulgaria. I will pursue the topic myself, so many thanks.

My mother was in Poland and could not escape, but her younger, unmarried brother was in Germany. He sailed on the SS St Louis which was part of the Hamburg-America Line, so they all thought they would be safe in the Americas. Why oh why did Cuba and the USA sent them back to Germany.

Deb
In May 1939, Cuba's President Bru refused any refugees seeking political asylum unless there was a hefty bribe per person. But noone had any money.

The USA refused their entry because they were refugees and America would only accept tourists. The American navy kept the ship from landing in Florida with threatening gun fire.

So why didn't the captain sail to the Dominican Republic instead? The Evian Conference had just finished (in July 1938). Your uncle would have survived.

Hels, I was appalled to learn many of the facts presented in this article. Recently I read of a conference next October at Yale to study antisemitism in France. The link is:
http://news.yale.edu/2012/09/13/antisemitism-france-focus-yale-conference

I will be very interested to read the conference papers.. the topic is important and I am particularly interested in France.

But I am not sure that the countries' outrageous responses at the Evian Conference of July 1938 were specifically anti-Semitic. I believe that if a conference had been told that Pol Pot was about to annihilate 21% of the Cambodian population, Australia, USA, Canada, France, Belgium, Britain would still have refused to save the refugees' lives.