The rail journey offered by Coastal Pacific was the longest railway construction project in New Zealand, starting in 1875. Prior to its completion, there was no direct train service that ran between Picton and Christchurch. 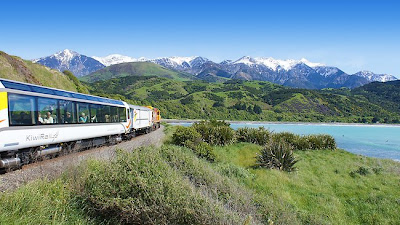 The Coastal Pacific train with coast on one side, snowy mountains on the other

I had been on a scenic railway tour in the south island of New Zealand before, but I had assumed that the massive death toll and destruction from the Christchurch earth quake in 2011 would have ended the Picton-Christchurch trip. As Anthony Dennis reported, however, the Coastal Pacific journey is up and running again, better than ever.

The Coastal Pacific train journey travels between the delightful port of Picton and Christchurch, the South Island’s largest city. This journey is a scenic feast of New Zealand, with the Kaikoura mountain ranges on one side of the train and the Pacific Ocean coast line on the other. The scenery along this rugged coastline is enjoyed via either the large panoramic windows in the normal carriages or an open air, breezy viewing carriage.

The Coastal Pacific train takes visitors through some of New Zealand’s finest horticultural and farmland areas, to see amazing wildlife such as dolphins, seals and penguins. 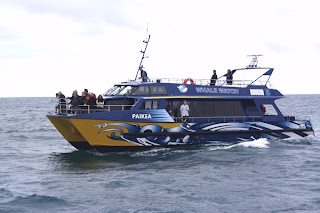 Whale watching in Kaikoura, on board the Tiki Touring boat

Along the way the train passes though Kaikoura. As far as I can see in the town’s web pages, Captain Robert Fyfe became Kaikoura's earliest European settler in 1843. He established Waiopuka, the first shore whaling station near where his house, built in 1860, can still be visited. Other whaling stations soon followed at South Bay, but after 1850, whale numbers steadily declined and the industry became uneconomic. Today all marine mammals are protected in New Zealand.

The town actively promotes itself a popular stop off for those passengers who choose to immerse themselves in the sheer drama and beauty of this place with its majestic alpine scenery, beautiful rugged coastline, Maori culture and amazing ocean wildlife. Visitors can and do break their journey to sail on the whale watching boats or to swim with the dolphins, literally. 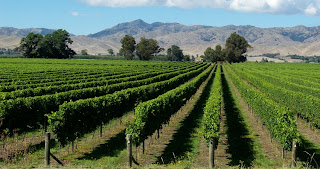 Or jump off at Blenheim to see the Omaka Aviation Heritage Centre. Built around one of the world’s largest collections of original and replica World War 1 aircraft, the collection includes rare, crafted trench art, personal items belonging to the Red Baron and realistic scenes created for the Knights of the Sky exhibition.

The service runs in both directions between Christchurch and Picton daily, stopping enroute for passengers at Rangiora, Waipara, Mina, Kaikoura, Seddon and Blenheim. The trip takes 5 hours 20 minutes, one way, with new café cars to sample the local food and wine. 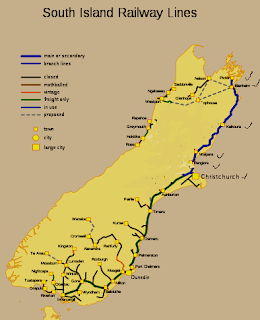 From May to September, KiwiRail’s Coastal Pacific train service between Christchurch and Picton will operate a reduced winter timetable i.e only on Fridays, Saturdays, Sundays and Mondays. So while winter scenery is more spectacular, summer is the most flexible time to travel.
Posted by Hels at 26.5.12

Nice one. Going through the wine growing country was beautiful. Drinking the local wine was even more beautiful.

I have been known to have the odd drop of New Zealand wines myself :) The weather and soil seem perfect for those beautiful vineyards along the Coastal Pacific route.

I hope you had a good time in out fair and pleasant land... David.

Hello Hels:
We are always excited by train travel which remains our preferred option over all other forms of transport. The journey which you describe here looks to have been magnificent and one which would appeal to us enormously.

Sadly, it is unlikely that we shall ever visit the Antipodes but your posts, always interesting and informative, bring it all that much closer.

It would be a great trip and now it has been reinvented since I last looked at it. Thanks for pointing out the update. http://highriser.blogspot.com.au/2009/11/great-railway-journeys-occasional.html

I have been to the northern island a few times, but only once to the south. It was a great holiday, with all the elements I love .. Great train trips, wine, open ocean and historical architecture.

I am with you on the trains.. And intend to cover all the major train tours in the world! Alas 5 hours is not enough.

You must come to Austalia and New Zealand! Retire from work, then allocate 3 months for a grand tour.

I am amazed that the south island has restored normal life as quickly as it did, given the Christchurch catastrophe. You, Jane and Lance should join me covering the greatest train trips :) There are at least five more I want to do.

Joan & Dave (USA)
We were recently there in Feb of this year and did do the ferry to picton, train to Kaikoura, stopped for 2 days and then down to Christchurch to get the westbound train to Greymouth before renting a car. It was some of the most beautiful scenary I have seen and we fell in love with NZ. We did alot of the south island and hope to come back one day and explore more but the train really gave us a great way to see such a diverse landscape. It is great to see a whole nation care so much about preserving thier homeland.

I probably would go for that open "viewing carriage". I wish you had included a picture of it.

In many respects, the Coastal Pacific reminds me of Henry Flagler's Florida East Coast Railway, especially the segment from Miami to Key West. While this section is abandoned, the highway that parallels this allows similarly spectacular views, especially when you can see isolated sections of the old tracks suspended above the water. The highway also passes though the Everglades, and if anyone goes to Southern Florida, I would not omit this car ride to the keys.
--Road to Parnassus

I am delighted to hear you did the Coastal Pacific route this year, and much more. It always had been a beautiful part of the world, but I was afraid the recent earthquake might have discouraged tourists.

I am too middle aged to enjoy the scenery in open viewing carriages :) But I do like the idea of spending a day in each of the stops, having a good look at the area on foot.

The Florida railway sounds like fun. I have travelled in luxury trains in all sorts of places (eg India, Canada, central Europe) but never Florida. So far!

Been to the South Island a few times and never thought of a train journey!

What a trip - that scenery.

I would mainly recommend seeing a region (in any country) by train if you can get on and off as often as you want, to explore thoroughly. And to sample the local foods and wines.

As far as I can tell in all of the south island, you pay the one price for the special train eg from Picton to Christchurch, but it can be broken up according to your tourist needs.

New Zealand is small and fairly remote, especially for Europeans. But some of the scenery is truly breathtaking. You must come and visit both countries.

New Zealand By Train --- just do it
The Coastal Pacific trip, I can highly recommend, it now has brand new carriages with large panoramic anti-glare windows.
These same carriages are about to appear in the North Island as the new Northern Explorer Service between Wellington and Auckland. Another great trip, they all are.
The North Island's scenery is ever changing from the coast to the volcanic central plateau. I'll be enjoying the view (and the new carriages) at the end of the year as I head home for Xmas
www.tranzscenic.co.nz

agreed 100%. The only thing I could add is in Canada, Scotland, India etc, the luxury train trips involved sleeping (on board the train or in hotels). Husband and I are working our way around the world on tourist trains :)

You should at least get a free rail pass for your lovely post promoting this trip, shouldn't you? It looks like an amazing tour - I would so love to come out there someday.

you must! Make it a good, long trip, to see everything in both countries. And summer (Dec-March) is much nicer than winter (June-Aug).

In Kaikoura you can swim with seals too. It is such fun to see seals underwater.

You are a travel person. I bet you find that city people, who see nothing more of nature than concrete walls and closed offices, are passionate about the slow pace of rural landscapes. Without exaggerating, I can imagine that swimming with seals might be the most liberating thing city tourists can do.

I am not sure about most liberating thing. I just like nature :)