This year I gave a conference paper called Captain Dreyfus, The Impressionists and the Politics of Anti Semitism, largely using the images from my blog article, Pissarro, Degas, Zola and Capt Dreyfus, France's ugliest moment. There were at least three heroes whose careers had been destroyed during the affair between 1894-1906, Alfred Dreyfus and Émile Zola of course, and also the heroic Major Georges Picquart who provided the evidence to the court about the real traitor. Major Picquart was later court-martialled for his revelations, proving once again that the French army was going to severely punish whistle blowers.

In both the blog post and the conference paper I left the story at the point where Captain Dreyfus was fully vindicated in 1906, three years after Pissarro was buried in Paris’ Père Lachaise cemetery. It was clear that the bitterness from this case remained in France for a very long time, on both sides of the affair.

One conference goer who heard my paper asked if I had ever seen a statue created by Louis Mitelberg called Hommage au capitaine Dreyfus. I had not. Apparently in the 1980s President François Mitterrand had ordered and paid for this statue of Dreyfus, planned to be located at the École Militaire in Paris. Even after almost 100 years, the French Minister of Defence was bitter about losing the Dreyfus treason case and refused to allow the statue in, or in front of their building. The reader should once again note that the courts had fully exonerated Capt Dreyfus in 1906 and returned him to his army rank with full honours and pay!! 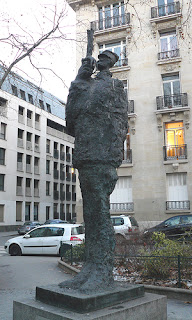 Today the statue can be found at the exit of the Notre-Dame-des-Champs metro station and a second version of the statue has been placed at the entrance of the Museum of Jewish Art and History in Paris. Quite separately, in 1999 the City of Paris agreed to name a square in the 15th Arrondissement after Alfred Dreyfus; it is at the corner of the Avenue Emile-Zola.

In 2006, President Jacques Chirac must have been sick and tired of Ministry of Defence’s attitudes and decided to mark the centenary of Dreyfus' return to the army, via a state ceremony. The great grandchildren of these three French heroes, Alfred Dreyfus, Émile Zola and Major Georges Picquart, were present at the 2006 ceremony; it was held, very appropriately, in the same cobblestone courtyard of Paris' École Militaire where Captain Dreyfus had been officially disgraced (see below). In his speech, President Chirac wisely noted that "the combat against the dark forces of intolerance and hate is never definitively won". 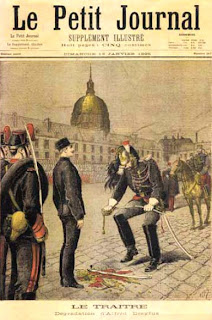 At the same conference, I was referred to the book The Hare with Amber Eyes: A Family's Century of Art and Loss, written by Edmund de Waal and published by Farrar Straus Giroux in 2010. de Waal, curator of ceramics at the Victoria & Albert Museum, described the experiences of his family over decades, as I analysed in a previous post. Now I want to return to the book and focus on the Dreyfus trial.

In 1870 the sons of the Ephrussi family were sent out of Odessa to establish the family banking business in Vienna and Paris. Charles Ephrussi became a serious connoisseur and art collector who flourished during France’s Belle Epoque. He was a collector of paintings in general, and a patron and friend of Impressionists in particular, including Degas, Renoir, Monet and Manet. He bought Une botte d’asperges from Manet and was included in Renoir’s Luncheon at the Boating Party as the out-of-place chap in the top hat and suit at the back of the party, talking to his secretary. 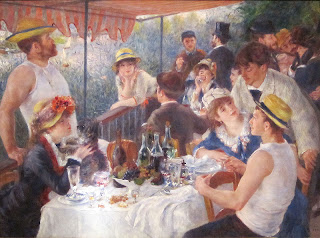 Important patron and friend of the arts though he was, Charles Ephrussi did not escape the anger of the anti-Semitic artists. Degas bitterly criticised Renoir for accepting too many commissions from so-called Jewish financiers.

Renoir was even nastier. He complained when Ephrussi began buying works of “Jew art” by (the non-Jew) Gustave Moreau: “It was clever of him to take in the Jews, to have thought of painting with gold colours… Even Ephrussi fell for it, who I really thought had some sense! I go and call on him one day, and I come face to face with a Gustave Moreau!” When the Dreyfus case broke, Charles Ephrussi found himself excluded from the company and friendship of the worst anti-Dreyfusards Renoir and Degas, the very artists he had so handsomely supported.

The blog called "preaching foolishness" has quite a lot to say about Avenue E Zola. Street naming is a big statement about a city's important citizens.

thanks for the reference. Naming streets in Paris is a very telling exercise, and Zola really was a huge figure in French literature. But the French naming committee took their time, didn't they?

Hello Helen:
Another most fascinating and very informative post through which, once again, we have learnt much which was previously unknown to us. The Renoir 'Luncheon at the Boating Party' is a painting with which we are very familiar and so it has been particularly interesting to have the man in the top hat identified.

I love that Renoir as well.

Ephrussi was essential to the Impressionists through the 1880s. Without their loyal patrons, the artists might have had a more difficult time.

The DICTIONARY OF ART HISTORIANS says the following:
In the 1880s, Ephrussi helped to organise a show of his friends in the Orangerie of the Tuileries, and was awarded the Croix de la Légion d’honneur. Ephrussi reviewed Impressionist exhibitions, eventually acquiring 40+ works by Morisot, Cassatt, Degas, Manet, Monet, Sisley, Pisarro and Renoir. From 1894 onwards Ephrussi fully devoted himself to the Gazette as its editor in chief during the time the magazine was becoming more scholarly. It was all going swimmingly, until the Dreyfus trial hit.

Great post. I was sure I'd seen a ref. to a new book on the case which came out recently:

There was an assassination attempt against Drefus as alate as 1908

Living in Paris, it comes as no surprise to read that it can take a century to get something done. Particularly involving the "affaire Dreyfus," which festers in certain quarters as palpably as the regicide of Louis XVI and Marie-Antoinette still does in others. Regarding the latter, a very old friend who has since passed away, and who was a baronness, once remarked in all seriousness, "That was the most terrible event of my generation."

All to say the past is still very present in France and the links very palpable through class, family relations, etc. People do not forget.

And as Debbie noted, it is telling that avenue Emile Zola and place Dreyfus are in the 15th arr., hardly the center of Paris.

Hermes
I haven't heard about the Ruth Harris book till now, but I liked what the review said about the never-ending nature of the affair.

It brought riots, resignations of national officials, imprisonment of an officer who discovered the fraud, a National Assembly fistfight, suicide of the army’s forger, an attempted coup, two assassination attempts, Jews and Jewish businesses attacked and Zola's possible murder.

Clearly the past IS still very present in France and the links are very palpable through class, Church and the military.

Esterhazy was a prick, but he was short of money and needed to earn ready cash from the Germans. He did not assassinate the king, for goodness sake. And in any case, Esterhazy eventually confessed publicly at least twice to his illegal actions.

If the French army would not admit then and won't admit now to getting it totally wrong, then I think you are spot on. The affair was/is more about nationalist symbolism than it was about fear of aiding another army.

made me remember my days with Emile Zola's "Nana" in my hand. What a wonder I remember thinking, completely enthralled!
Have a wonderful day!

Of course you loved Nana :) Emile Zola was a much loved writer and a proud hero of French literature, but politics intervened. Because of his open letter to the President on the front page of a major Paris newspaper in Jan 1898, the right wing moved against him with ferocious speed.

Zola was brought to trial for criminal libel on 7th Feb 1898, he was convicted on 23th February and removed from the Legion of Honour. Rather than go to gaol, Zola fled to Britain.

Back in France, this gentle man of letters was killed by carbon monoxide poisoning in 1902 and vilified by right wingers across France.

I wanted to thank you for this excellent read!! I definitely enjoying every small bit of it I've you bookmarked to have a look at new stuff you posted