Established by Royal Charter in 1917, the Imperial (now Commonwealth) War Graves Commission was established in tribute to the 1,700,000 men and women of the British Empire forces who died in the two world wars. It is a non-profit-making organisation founded by Sir Fabian Ware.

The Menin Gate site in Belgium was chosen as a memorial site by the Commission because of the hundreds of thousands of men, from all British Empire nations, who passed through it on their way to the WW1 battlefields. The Ypres Menin Gate Memorial now bears the names of more than 54,000 officers and men whose graves are not known. The memorial, designed by Sir Reginald Blomfield with sculpture by Sir William Reid-Dick, was unveiled in July 1927.

Soon after the Great War ended, British families also wanted an Anglican church in Ypres. Parents and widows had not received their sons and husbands’ bodies back for a proper burial, so it was important to have a safe, peaceful and Christian place for mourners to visit. It took some time, but in 1924 a fund was finally launched, with the intention of building a church possibly next to the old Menin Gate. The choice of architect (Sir Reginald Blomfield) was a good one since he was already involved with a number of the British and Commonwealth military cemeteries in the Ypres area. 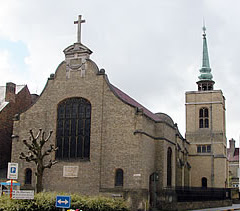 The foundation stone of St George's Memorial Church was laid in 1927 and building started on the simple brick church. The interior, which was to serve as a memorial to the young men who lay in the soil near Ypres, had enough room only for 200 people. Families, schools and military units donated pews, plaques, windows, the font and the altar. The Bishop of Fulham dedicated the completed church in 1929 and soon there were regular services and a Sunday school.

What I hadn’t realised, until I saw the BBC4 film The Children Who Fought Hitler, was that it was decided to open a school in Ypres as part of the same project. It was to be funded from donations by Old Etonians who needed to build a memorial to the 300+ old-Etonians who had lost their lives in the Ypres area from 1914 on.

The tiny school opened in April 1929. There were 62 pupils learning at the school at the beginning, most of whom were the children of British workers who had moved to Ypres with the Imperial War Graves Commission. The Commission's bus brought the children to school each day, from their homes in the villages all around Ypres. 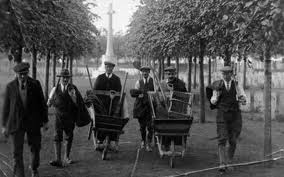 Imperial War Graves Commission workers who lived in Ypres in the inter-war years.

Eventually more teachers and a headmaster arrived from Britain until, by 1933, 130 pupils were enrolled. The original principal was delighted to introduce a full curriculum, along the lines taught in schools in Britain. In 1934 the new principal changed the name from Eton Memorial School to the British Memorial School and also introduced a British school uniform.

It was appropriate that the Belgian King Leopold III visited, given that he had himself studied at Eton college during the Great War. But eventually, during WW2, the school had to close. In May 1940 all the British students returned home and the Germans took over the church buildings; they used them as their officers' club.

So from 1929 on, the school had served a special community of ex-servicemen and their families who cared for the WW1 graves in Ypres. Steeped in ideals of patriotic service and sacrifice, many pupils and ex-pupils refused to surrender to the invading Nazi forces and went on to make names for themselves in missions across Europe. As that is another, huge story in its own right, I recommend the book by James Fox and Sue Elliott called The Children Who Fought Hitler: A British Outpost in Europe, published by John Murray in 2009. 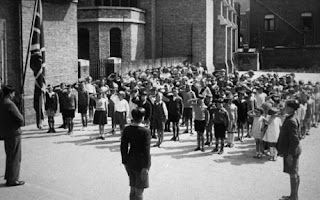 Post-WW2, the church's chaplain was paid for by the Imperial War Graves Commission. The British community of Ypres had so shrunk that there was a much smaller number of people to attend the church on a regular basis. Furthermore there were hardly any British children based in Ypres who would attend the school, even if it ever tried to open again.

In recent years there has been a renewed interest by British families tracing a relative who fought in the First World War. Many visitors to Ypres now visit St George's church, specifically to look at the special memorials and to locate the graves. And to add memorials to their relatives who died in the Second World War. Services are still held at the church by the chaplain. But these days, the most special annual services are held for Armistice Day (11/11). 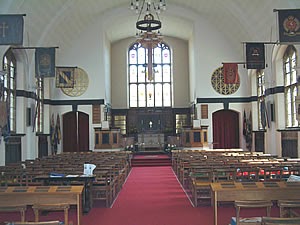 Just amazing, these stories from history that most of us never hear about.
This and your linked earlier post bring tears.
Thank you for the telling.

Hello Helen:
What a fascinating and insightful piece of history. This is somewhere we really should visit particularly as, not infrequently, we are passing through Belgium.

I have been long interested in memorialising wars' victims, through churches, gardens, sculpture, monuments, triumphal arches etc etc. And I certainly knew about Ypres, Menin Gate and the Imperial War Graves Commission's cemeteries.

But I also had never heard of this important part of history, as written in the book "The Children Who Fought Hitler: A British Outpost in Europe". We cannot read everything of course, but Ypres was so important to British Commonwealth families, you would think we might have heard it mentioned.

Joe and I have travelled around Gallipoli, Beersheba, Ypres, Passchendaele, Fromelles etc etc. Well worth seeing the memorials now, almost 100 years later. Kipling wrote the words inscribed on the memorials, presumably with his own young lad, tragically killed, in mind.

I saw The Children Who Fought Hitler on tv and couldn't help being impressed with their heroism and their patriotism. It would be good to blog on the role of the British Memorial School in creating these exceptional young people.

Student
what an amazing story...
I can see history blogs being thought out, as we type!

My son went to the museum a few years ago - wonderful

I am so envious!!

All unis and TAFE colleges here close for four weeks holiday every winter (end of June to end of July). If every year I fly out on the day classes end and fly back home the day before we start, I still don't have enough time to see everything I want to see.

What a stylish church building! Although there is some decorative detailing, the emphasis is on the form and the proportions. It is the type of architecture that could be built today and just as appealing -- a true classic.

agreed! By the time the church was dedicated in 1929, the parents and wives of the dead soldiers were still in active grieving. It would have been really inappropriate to have built a large, fussy, ornate building.

Considering the location and function of this particular church, Sir Reginald Blomfield was a very thoughtful architect.

I received a letter from Garry Willmott, headed Rest In Peace. He wanted to encourage the Australian Government to establish an MIA Institute to ensure that soldiers, killed horrifically during the wars, could rest in peace in French and Belgian soil.

I wonder if the Commonwealth War Graves Commission have a position on Garry's suggestions.

Read the article at:
http://www.themercury.com.au/article/2011/06/20/239205_tasmania-news.html or contact Garry directly, if you want to support his cause.

Hels, as usual a very interesting and informative post which is well illustrated. I love that church building, as it is so much influenced by the Flemish architecture and looking like part of the Belgian landscape. Its presence though, a wonderful memorial to so much self-sacrifice.

As I young person I never thought I would be interested in memorials, battle field churches, war cemeteries, shrines etc.

But as we age, we become more and more aware of the sacrifice by the young men (boys really) and the sense of loss by their parents and wives. And an entire generation of young women, born in the mid-late 1890s, didn't ever find husbands.

Whenever I read about war and war memorials, but especially about the actions of the people, I wonder how well we, in the 21st C, would fare under the same conditions.

not well, I suspect. My grandfather, a true ideologue, lived through the Russian Revolution. He and his siblings lived in dire poverty anyhow, so perhaps they had less to lose, but they truly threw themselves into the socialist cause.

Now people are more informed about the certain failure of war for both sides and more cynical about the governments' true purposes. So who gets sent off to bomb distant nations? The young, the poor, the unemployed, the marginal.

The appreciate an update from current users about their experiences with the particular solution they choose.Thanks for sharing the informative post.

my pleasure. If you would like an update on the topic, I recommend the book by James Fox and Sue Elliott called The Children Who Fought Hitler: A British Outpost in Europe.

I seem to have picked up the article connected to me and the former British Memorial School in Ypres in the 1930’s and the book I researched of my experience of May 1940 with the rest of the British Community from the advancing Germans, called THE CHILDREN WHO FOUGHT HITLER. Since the publication of the book, also in sound form 15 discs for special libraries, I got a long telephone call from a woman who was living in Neuve Eglise near Ypres and her sister came to the school and all of the family escaped with us by walking all the way from Ypres to the port of Calais. Her name is Mrs NUGENT who lives in Queensland. I managed to later trace her coordinates through the local newspaper, she still has a photo of the ship that saved our lives THE CITY OF CHRISTCHURCH hanging in her home.

Perhaps you are aware that the present Chaplain of St George’s Memorial Church in Ypres is an Australian and he has kindly written several articles I had sent him related to the lives of the pupils. When I returned with my Parents to Belgium in early 1946 as my mother was Belgian and my father had since 1919 worked for the Imperial War Graves Commission in Ypres which you read about in my book. Although I am now 76 years old and a retired journalist, I have the impression that I still have a lot of catching up to do with my whole life in “photojournalism” and the various world conflicts.

James
what a delight. Thank you for reading this blog article and taking the time to reply in detail. For me, the most exciting connection was that your father had worked for the Imperial War Graves Commission in Ypres since 1919.

As you can see from this blog, I am fascinated by the notion of memorialising WW1, in Britain, France, Jerusalem, Australia and the entire British Empire.