Tulip cultivation in the United Dutch Provinces was rare. It probably started in 1593 when tulip bulbs were sent from Turkey by the Dutch ambassador there. Those beautifully coloured and variegated tulips, newly arrived, cost a fortune. Only the wealthiest aristocrats and merchants could afford them. But by the early 1630s, flower growers successfully raised crops of more simply-coloured tulips in Holland. So tulips became one of the few luxury goods that could be purchased by a wider portion of the community.

When I wrote a post last January called Tulip mania: Netherlands in the 1620s and 30s, I thought I would probably come back to the topic of 17th century Holland again. But not to a novel. The Tulip Virus by Dutch writer Danielle Hermans (Minotaur 2010) changed all that. 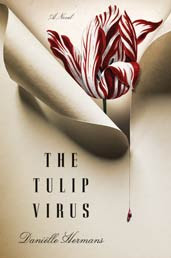 The novel, published 2010
The publishers wrote that “it is a gripping debut mystery set in contemporary London with roots in 17th century Holland and the mysterious tulip trade. In 1636 Alkmaar, Wouter Winckel’s brutally slaughtered body is found in the barroom of his inn, an anti-religious pamphlet stuffed in his mouth. Winckel was a tulip-trader and owned the most beautiful collection of tulips in the United Republic of the Low Countries, including the most coveted and expensive bulb of them all, the Semper Augustus. But why did he have to die and who wanted him dead?

In 2007 London, history seems to be repeating itself. Dutchman Frank Schoeller is found in his home by his nephew. Severely wounded, he is holding a 17th-century book about tulips, seemingly a clue to his death moments later. With the help of his friend, an antique dealer from Amsterdam, the nephew tries to solve the mystery, but soon comes to realise that he and his friend’s own lives are now in danger.

The Tulip Virus is a fast-paced, fascinating mystery. It is based on the real-life events surrounding the collapse of the tulip bubble in 17th century Holland, the first such occurrence in history, a story that plunges readers deeply into questions of free will, science and religion, while showing the dark fruits of greed, pride and arrogance”.

By now the publishers had my attention, since I am passionate about 17th century Netherlands. But publishers always promise fast-paced, fascinating mysteries; it is like a 19 year old boy promising his young girlfriend a lifetime of total honesty and tenderness.

What IS true is that by 1636, tulips were traded on the stock exchanges of many Dutch towns; the prosperous trading cities of the Netherlands were turned upsidedown by a tulip frenzy. Serious Calvinist Dutch citizens from every walk of life, if they had some spare money to invest, really did get involved in buying and selling tulip bulbs. Speculators, who wouldn't have known a tulip from a begonia, began to enter the market. 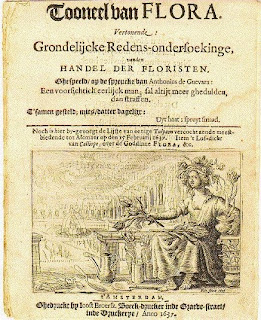 Warning pamphlet from the Dutch government, printed in 1637
The bubble didn’t last for long, but while it did, rare bulbs changed hands for ever-increasing amounts of money. Contemporary reports noted that a rare bulb might have been worth more than the cost of a family’s home.  It was not until Feb 1637 that tulip traders could no longer find new buyers willing to pay increasingly inflated prices for the precious bulbs. As this realisation set in, the demand for tulips suddenly collapsed and prices plummeted. The excitement came to a shuddering, crashing halt.

Both the government and the church had published pamphlets, warning about the foolishness of investing all of the family’s assets on tulips. But the character in The Tulip Virus, Wouter Winkel, didn’t listen. He and his wife seemed to have been the owners of an average tavern who died before their bulbs had been sold. It seems likely that during this bit of Dutch history, their seven children ended up in an orphanage and the bulbs were auctioned off to defray the orphanage’s costs. The auction price was so hysterically high, the children became rich overnight.

I loved The Tulip Virus but what did other reviewers think of  Danielle Hermans' novel? Mandythebookworm's Blog said she did not want to put this book down and whenever she had to, she was always thinking about how to wangle the next reading opportunity. She was hooked right from the first page. The Mystery Gazette believed the tulip connection to 17th century Holland added a very fresh spin to a secret that must be concealed at any cost. To be completely honest, I must let you know that not everyone loved the book. The Greenman Review didn’t enjoy the two intertwined, parallel stories at all. 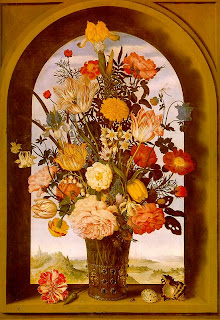 Ambrosius Bosschaert, Flower Vase in Window Niche, 1620
My favourite reference for this period is The Embarrassment of Riches: An interpretation of Dutch Culture in the Golden Age, written by Simon Schama and published by Alfred A. Knopf in 1987.
Posted by Hels at 21.11.10

My favorite flowers are Parrot tulips

andrew
you have a lovely blog. I have created a link between my post on tulip vases: http://melbourneblogger.blogspot.com/2010/01/tulip-mania-netherlands-in-1620s-and.html

I am mad for those Rembrandt tulips with the startling red stripes... they are so dramatic, you can see why they became a rage. Lovely post and thanks for the tip about the book!

lostpastremembered
you are a woman of fine taste :)

The big bouquets of flowers seen in 17th century Dutch still-life paintings were filled with gorgeous colours, shapes and textures. No wonder they made people feel cheerful and optimistic.

The only surprise was that 17th century Calvinists were expected to be rather dour people who had to wear simple clothing and avoid inappropriate behaviour. Rembrandt tulips seem so... full of passion!!

I love 17th century Holland, and I love good historical novels, or novels set in contemporary times with an historical twist. So, I must read this book - much thanks Hels for the tip. I just googled the author and saw that her next book will appear in January (in Dutch) and is a thriller about the murder of a Dutch historian in Amsterdam who had been researching 17th century Manhatten - sounds like an interesting read too.

Mr Doolan,
agreed. There is something more meaningful about a historical novel.. it feels more valuable, somehow.

But I get very territorial about the areas of history to which I claim some expertise. If a novelist makes a "mistake" about the Boxer Rebellion, a subject about which I know nothing, I certainly would not fuss over it. But "mistakes" in novels about 17th century Amsterdam or Belle Epoque Paris are very annoying.

Fortunately (for my blood pressure) both Danielle Hermans and Deborah Moggach seem to have done their historical homework thoroughly :)

Wow, evidently, I never knew a thing about tulips before reading this post! This is all so fascinating!

Emm,
I did 17th century Dutch art at uni and saw every floral still-life ever painted, and every silver and ceramic flower/bulb holder ever made. But I knew nothing about Tulip Fever until seeing the book launch advertised on the London Underground!

My husband says that it only goes to show: people in every generation will speculate on a boom product or service - nothing changes.