As I wrote in Selfridge’s, Suffragettes and Fashion, the innovative shopping experience promised by Selfridge’s in London (1909) could give middle class women a pleasurable day out of shopping, fashion, socialising with friends in the first in-house coffee shop or in the roof top restaurant and use of beautifully presented ladies bathrooms. The women were surrounded by neo-classical columns, impressive entrance and rich decoration. Of course Gordon Selfridge was a canny business man. He founded his store just as the women's suffrage movement was becoming successful and the London Underground was bringing respectable ladies into town. 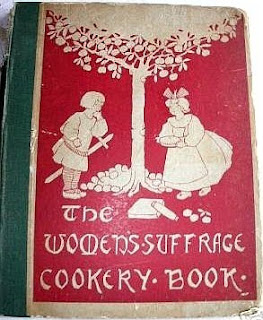 Suffragette Cookery Book, A Dowson ed, 1913
But to suffragettes, the department stores were both attractive AND ideologically unsound at the same time. Many women loved the financial emancipation involved in buying their own goods, but some of the more radical women disapproved of the trivial pleasures the shops offered. They feared that middle class women were going to be seen as merely a new market to exploit! When hordes of suffragettes ran through the West End shattering shop windows in March 1912, it was evidence of this ambivalence. 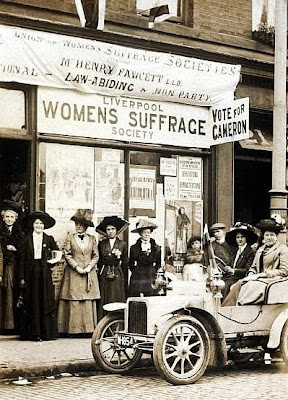 WSPU shop in Liverpool
*
The emergence of shops arose from the profitable nature of the WSPU’s campaign, and from the expansion in retailing. Shop-keeping was a common female activity, so it became a respectable foray for women to move gently into business and the public sphere. And, as expected from a women’s organisation campaigning for female suffrage, the shops became feminine spaces, with an emphasis on colourful decoration, attractive items for women and domestic products. 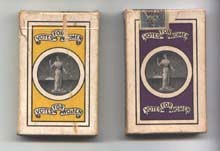 Playing cards with suffragette images
And they were not radical. The shop encouraged new members who could give talents, time and money to the campaign. Many of the shops saw the necessity of drawing in women who would not have ventured into a branch office; they wanted to create environments that were attractive to everyone, even ambivalent women. Identifying their outlets with the private business community rather than with political activism helped de-radicalise the branches’ image.

The organisation developed into a formidable propaganda machine. It successful raised funds and this allowed the purchase of property inside London and elsewhere. In London, the WSPU established its headquarters at Clement’s Inn and in May 1910, opened a shop in Charing Cross Road, the Women’s Press. As well as earning money for the WSPU, the shop publicised the cause. John Mercer, University of Portsmouth  noted that the opening of the first Votes for Women shops began in 1907. The trend for occupying retail space grew, with the emergence of shops in large cities like Liverpool, Edinburgh and Bristol in 1909. The general election of Jan 1910 saw the WSPU campaign for a protest vote against the Liberal government. As part of this campaign, most major WSPU branches took temporary shops and committee rooms, to assist in their work.

But for many branches, the appeal of a suffrage shop led them to take permanent premises. By the end of the election, people were in and out of the shop all day long. The sale of badges and the crowd that collected round the windows showed how much could be done, if kind friends helped to retain the premises permanently. By 1914 there were 19 WSPU shops in London alone. More remote towns like Plymouth were expanding their offices into retail outlets. 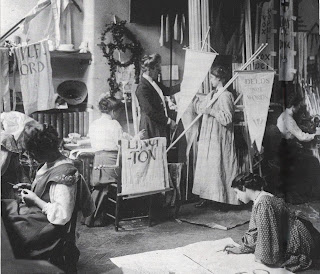 The range of objects for sale in the suffragette shops seemed to have been based on ideas of middle-class domesticity and personal adornment. Even for non-suffragettes, these ideas complied nicely with conventional gender identities. The emphasis on visual appeal, comfort and luxury presented these shops as places of shopping pleasure, so I suppose that the militant women were no happier with the movement’s shops than they were with Selfridge’s. 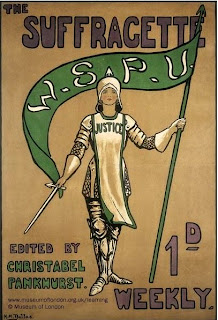 One Penny Weekly, on sale at suffrage shops, 1912
*
Not that the main department shops had to worry. Suffragette shops could only hold a small range of products. And in any case, advertising campaigns targeted the Modern Woman, trying to attract her patronage – in hats, corsets, suits. Swan and Edgar, or Selfridge’s could provide whatever she needed for the next parade.
An appropriate symbol would be on the suffrage teasets 1908 eg an angel, standing tiptoe and blowing on a curved trumpet. This symbol was designed by Sylvia Pankhurst and placed on china that mostly came from Williamsons of Longston Pottery in Staffordshire. For enthusiastic shopkeepers, the Christmas week was the busiest and nothing sold more popularly than the Suffragette Cookbook. But it wasn’t all politics. Women's magazines, like Queen, were stimulating a taste for consumer goods as well. 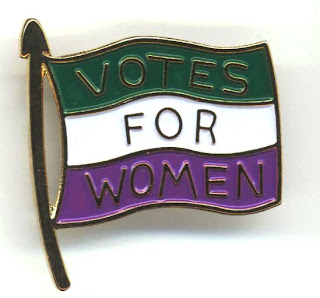 Badges, stickers and inexpensive jewellery were popular
A Walk in History blog located Clements Inn. The London School of Economics now stands in the headquarters of the WSPU, from 1906-12. A plaque notes that in 1908 the Women’s Press was also situated in this building. The blog concludes that like other shops, The Women’s Press sold items like books and pamphlets, of course, but also badges and scarves. The suffragette newspaper Votes for Women was written and produced at Clement’s Inn and sold by volunteers and via horse-drawn press carts, as well as in newsagents.

Sashes for sale, in movement colours
*
Suffragette shops were really the first place for women to effectively market themselves. But clearly the shops were not merely retail outlets. Krista Cowman  said shops helped with recruiting work and helped to develop a sense of team work. I believe the popularity of women shops with the WSPU’s constituent branches also showed the need for their own space. Lectures used to be held in public buildings eg a town hall or they were held as open-air meetings.

From an organisational point of view, the use of their own shop made the planning of meetings easier to organise and control. Workshops were opened. And one more critical issue - facing increasing hostility over its militant activities, the organisation’s own space offered protection. 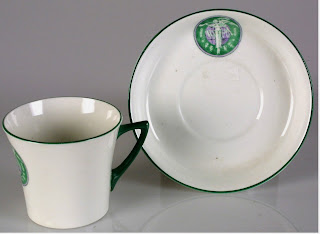 China teaset, with angel symbol designed by S Pankhurst
Sylvia Pankhurst and her American colleague, Zelie Emerson, took over a baker's shop opposite Bow Church in Bow Rd, and in October 1912 set up the first East London branch of the Women's Social and Political Union. Friends build a wooden platform outside the shop and from which Sylvia would address the passing crowds. 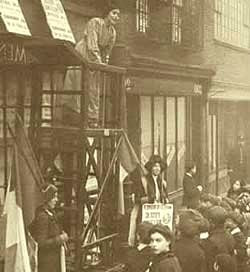 Sylvia's Suffragette Shop, Bow Rd, East End of London
Yet the suffragette shops themselves suffered from men’s physical violence! There was a major window-smashing campaign leading to damage in suffragette shops in Oxford and Regent Sts, and Piccadilly. There was an attack on the Bristol WSPU shop in 1913 by university students, in which windows were smashed, signs painted-over and furniture burnt. Meanwhile in Newcastle, the WPSU shop’s windows were smashed three times. With male violence and the decline in merchandise due to WW1, the shops’ retail identity never recovered, even after the war. The years from 1906-1916 were the magical years.
*
John Mercer, my favourite writer on this subject, published another article which I recommend: “Shopping for Suffrage: the campaign shops of the Women's Social and Political Union”, in Women's History Review, 18, 2, April 2009.
Posted by Hels at 12.12.09

Hels,
What a wonderful post! You've reminded me of many things here (not that I remember those times!!!). The idea of owning or working in a shop reminds me again of Pygmalion and ELiza Doolittle's desire to work in a flower shop and be respectable.

You've also reminded me of lunches out in a department store with my mother and grandmother when I was very young - the tea, the fancy cakes, the restaurant on the upper floor. I will be writing a post on this - thank you for the association.

I think I would definitely have been a suffragette, don't you? Great post as always!

Thank you for a fascinating post, Hels! I first went to London when I was 11 ( a fair while ago) and loved to eat at Selfridges with Mum. I think that I started to read about the Suffragette movement at about that time as well.

The history of the Suffragette movement and the history of shops are such interesting topics. It's good to see them combined!

Your article made me think of the heroine of the film, 'The Winslow Boy', and her work for the Suffragettes.

Chris,
have a look at the ladies who lunch at Selfridge's, at http://melbourneblogger.blogspot.com/2009/04/selfridges-suffragettes-and-fashion.html

I too remember being taken by my mother and grandmother to lunch or to afternoon tea. All the women and girls were dressed rather nicely and even the waitresses wore black and white.

Thanks for the nice Joan of Arc on the Magazine cover. A good example for the use of Joan as a modern political symbol and the use of women as allegories.

i have gone through this blog. i found it really interesting fot my job and my future career

i have gone through this blog. nowadays im working from my home as a online businessman. and the above blog is really helpful.

Xenophon, thanks for mentioning Joan of Arc.

It is very interesting that newly independent women would chose an image that represented "female heroism" on one hand and "female piety and obedience" on the other. And they went back 550 years in French history to find their model.

I have added a link to The Edwardians blog. There you will see a great photo of a volunteer, selling copies of Votes For Women newspaper.

Opening your own business is an exciting venture. One of the first things you should do to ensure your success is write a business plan. Anyway,you have a very informative blog.

I really appreciate your post and you explain each and every point very well.Thanks for sharing this information.And I’ll love to read your next post too.

I like your blog post. Keep on writing this type of great stuff. I'll make sure to follow up on your blog in the future.
Sash Windows Edinburgh

you might like to read "Kate Frye’s Suffrage Diary: The Suffrage Shop in Hythe High Street" in the blog called Woman and her Sphere. An interesting analysis of one suffragette shop from 1912.

Examine a suffragette banner bought by The People’s History Museum, which has the largest collection of trade union and political banners in the world; plus a good textile conservation studio. Created by premiere Manchester banner maker Thomas Brown & Sons, the banner celebrates the founding of the Women’s Social and Political Union (WSPU) by Emmeline Pankhurst in her home in Manchester, in 1903.