Like historian Garrie Hutchinson, who we will meet in a moment, I had a very powerful moral and political objection to the Vietnam war. My grandfather had been a soldier-translator in the 1914-18 war and my father was an engineer in the 1939-45 war. But I did whatever was open to a civilian to bring about the end of conscription for Vietnam. And I still grieve for the parents who lost their sons in all wars.

Those of you who follow this blog will know that I am very interested in the community memorials created to mourn those appalling losses. You can find my earlier posts on war memorials in:
Mildura: a rural city full of Art Deco gems,
Charles Sargeant Jagger II: low reliefs,
Charles Sargeant Jagger I: war and sex,
Australian Bandstands in the Federation Era and
Melbourne's Shrine and the Great Depression.

Within a few years after the end of World War One, there would have been very few towns throughout Australia that did not have their own war memorial. Steve Gower of the Australian War Memorial noted that quite a few were simple stone figures of a classless soldier without rank, of sombre expression, resting on his arms, reversed on a plinth. Usually a roll of honour provided a list of locals who had enlisted, with the names of those who died indicated by a asterisk.

Or there was no individual soldier statue at all. Instead communities may have chosen a cenotaph, a vertical slab of granite that resembled a large headstone, a memorial arch, a ceremonial gate into the local park, a Cross of Sacrifice or a statue of a grieving mother. Internet Curtains blog, in examining the Triumphal Arch at Victoria Embankment in Nottingham, believed the choice of memorial needed to be sensitive to the real politics of the war being memorialised. Nottingham’s triumphal arch in portland stone with intricate iron detailing may have been over-the-top, Chris believed, but at least the patron showed enough good taste not to commission a corpse, a Portland stone artillery gun or a lion trampling a snake.

Garrie Hutchinson’s latest book is called Remember Them: A Guide to Victoria's Wartime Heritage. The publishers wrote: Victoria's wartime and military heritage encompasses a vast range of memorials, from the majestic Shrine of Remembrance to local war monuments, honour boards, cemeteries, Avenues of Honour, sculptures, museums and memorabilia. Each memorial commemorates the lives, courage and sacrifice of the local soldiers who served in the various theatres of war around the world, from WW1 and WW2, Korea, Vietnam and more recent battles. This detailed guidebook shares the personal stories of the individuals honoured in 250 of Victoria's key war memorials, both metropolitan and rural. Arranged geographically, with accompanying maps and photographs, the book provides a unique insight into the nation’s wartime history and the local heroes who fought. 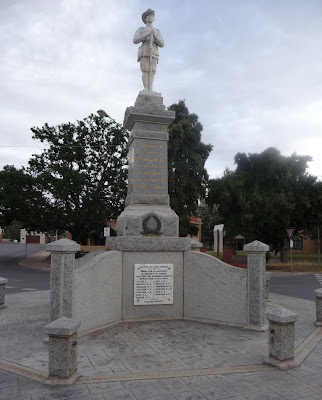 I will select just one Victorian town as an example. The Charlton memorial was designed as a white marble Digger statue on granite obelisk that has four wings at the base. A series of granite posts surrounds the memorial, the first saying In Memory Of The Soldiers Of Charlton and Didstrict Who Gave Their Lives For The Empire During The Great War 1914-1919. The second says Erected By The Citizens Of Charlton And District In Memory Of Those Who Paid The Supreme Sacrifice World War 2, 1939-1945. The name of every local lad who served, was wounded or died in battle is listed individually on the marble plaques.

The Age (8/11/09)  said that it was Hutchinson's sixth book on military history and pilgrimage. Yet as an enemy of Vietnam War conscription, he felt hounded out from a State Government job as a project officer in veterans’ heritage, where his work involved military commemoration and education. Hutchinson found tragic and heroic stories all over Victoria, carved into granite or marble; built in bronze; on monuments in main streets, parks or cemeteries; on honour boards in community halls, Mechanics' Institutes and clubs in every community. They mark sacrifice, devotion to duty and family loss in the state's wartime heritage, from colonial times on. In many ways our monuments and war memorials speak to that unique national character, he claims. “If you look at the statues that are all about the place, they're all about mateship, helping each other, compassion and volunteering.

Small and large communities in other states, devastated by the loss of their young men, also built special memorials. Your Brisbane Past and Present blog has 3 posts that include an equine Boer War statue, once in Edward St Brisbane and moved to Anzac Square instead. The Second Boer War (1899-1902) started just prior to federation in this country, but Australians still flocked to the defence of the empire on horseback. And simple memorials in small Queensland country towns.

The Sydney City and Suburbs blog located many such sites eg1 Enfield War Memorial in the south western suburbs of Sydney. Built to remember World War I servicemen, it was unveiled in 1924. The Howitzer gun on the sandstone pedestal was donated by the French government in recognition of Australia’s heroic wartime support. Eg2 Cronulla War Memorial is an obelisk with a paved sandstone base, a sandstone block mid-section and a polished granite top section. The main inscription says “1914-1919 Honour Roll Cronulla War Memorial. Their bodies are buried in peace, but their name liveth for evermore.” .

But I wonder. Only the parents, siblings, widows and school friends would have remembered the soldiers by name. Once these people stopped visiting, would subsequent generations ever visit the memorials? For the men involved in the 1914-8 war, I am guessing that the names would have ceased being meaningful to the general community within 30 years. Now citizens pay their communal respect only on Anzac Day (25/4), as shown so sensitively by aussie_time_traveller and many other bloggers.
* 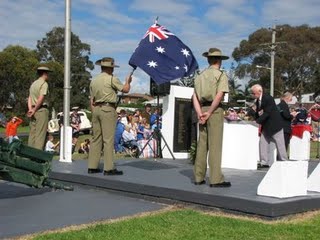 I was in pharmacy school on a college deferment or I most surely would have died in a rice paddy.
I'm following your blog now and hope you will follow mine.