Huguenots and the South African Cape

With the 1685 Revocation of the Edict of Nantes, French Protestants were stripped of any protect-ion they may have had in Louis XIV’s France. I thought I knew everything there was to know about the exiles' large communities in England, Ireland, Germany, Netherlands and Switzerland, but then people started talking about the small Hug­ue­n­ot diaspora in South Africa. I searched the other blogs and found a little eg The du Preez Family blog.

Cape of Good Hope and the Western Cape region

In fact the Dutch East India Co./VOC, under Jan van Riebeeck, had already made a permanent Calvin­ist settlement on the Cape of Good Hope. He arrived with five ships in Cape Town bay in 1652. Cape Town’s settlement was a predominantly as an interim port for VOC ships, en route from Europe to Asia. In order to fully stock Cape Town’s port, the VOC admitted good Protestant citizens who could settle as farmers and provide the food and drinks. As early as 1671 the first Huguenot refugee, Francois Villion/Viljoen, arrived at the Cape.

Clearly the Dutch East India Co. encouraged the Huguenots to emigrate to the Cape because they shared Calvinist beliefs. But they also recognised that most of the Huguenots were exper­ien­ced farmers from parts of France that specialised in wine growing. After their arrival at the Cape, the immigrants were expected to make a living from agric­ulture, business or by practicing a trade. If they decided to farm, they were allotted farm land without cost. As soon as a few families settled, they laid the first stone of the Cape’s Dutch Reformed chur­ch 1678, built and later renovated in the typical Cape Dutch style.

An agent was sent out from the Cape Colony in 1685 to attract more settlers and new immigrants began to arrive eg in 1686 the brothers Guill­aume and Francois du Toit reached South Africa. Timing was everything! With the Revocation of the Edict of Nantes, many a French Protestant was looking around for a home. By 1688-9 the 201 Hug­uenot families who arrived were just large enough to leave an impression on the young settlement at the Cape, only 70 km outside Cape Town. 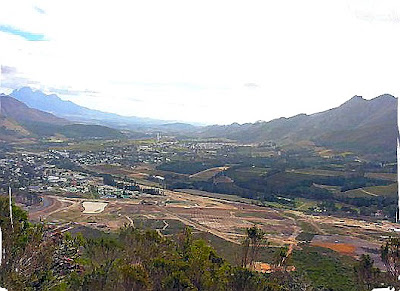 
In 1688, French Huguenot refugees were given land by the Dutch government in a valley called Olifantshoek/Elephant's Corner. The name of the area soon changed to Le Quartier Francais and then to Fransch­hoek Valley. That year a group of c200 French Huguenots arrived from La Motte d'Aigues in Provence and other areas. Examine A Post-Modern Protestant in Paris; his post South African Wine a French Protestant Heritage noted how they specialised in vineyards.

When the de Villiers brothers arrived at the Cape with a reputation for viticulture, and in time, the brothers planted many thousands of vines at the Cape. They moved from the original farm that they had been granted, La Rochelle, to finally settle on individual land grants near Fransch­hoek in places they named Bourgogne, Champagne and La Brie. Lucky were the passing ships that stopped in Cape Town. 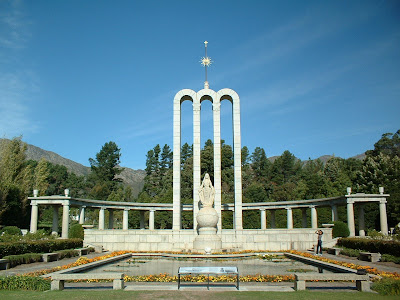 Individual arrivals contin­ued on and off until the end of Company-supported emig­rat­ion in 1707. Undoubtedly these French Huguenot exiles created fertile valleys out of the tough land they had been given in the Cape. But the white pop­ulation in the Cape was small, so they soon married their children and grandchildren into the fam­ilies of other colon­ists. And it didn’t help that the Dutch East India Co. insisted that schools taught exclusively in Dutch. By the mid C18th the Huguenots ceased to maint­ain a distinct ident­ity. Within two generations even their home language largely disappeared.

What is left now? Some important surnames, today mostly Afrik­aans speaking, remain in families who had French-speaking great great grandparents eg Cronje-Cronier, de Klerk-Le Clercq, de Villiers, Terre-blanche and Viljoen-Villion. Plus a number of wine farms in the Western Cape still have French names, as do their products. 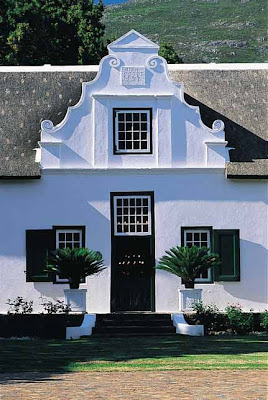 Then there is a large monu­ment, Huguenot Monument in Franschoek 1945, commemorating the arr­iv­al of the Huguenots in South Africa, that wasn’t inaug­urated by Dr AJ van der Merwe until 1948. The cen­tral fe­m­ale figure stood for religious free­dom, denied the Huguenots in their beloved France but offered by Dutch South Africa. A useful analysis of the Huguenot Monument can be found in the Franschhoek blog. Finally the Memorial Museum of Franschhoek next to the monument celebrates the his­tory of the French Huguenots who settled in the Cape.

The Huguenots certainly settled in many places. I am interested in them because some of my ancestors were Huguenots. I've found it quite difficult to research my family tree that far back even though they went to England!

Viola, The Huguenot Society of Great Britain and Ireland has been excellent for any research questions I have had. For family genealogy research in particular, go to http://www.huguenotsociety.org.uk/family.html

Of course you will find all the normal problems facing genealogical researchers: women lose their surnames, on marriage; records aren't always complete etc.

You are fortunate your ancestors went to Britain where the parish and civil records are excellent. My family came from Russia where there were no civil records and parish records were only for Christians.

Hels,
Thank you very much for referring me to the Huguenot Society. I will certainly look it up.

I have been a bit lazy as far as blogging is concerned lately for various reasons. When things settle down a bit I hope to get back to it!

Hullo Hels... I am curious about a section of our du Fresne forebears that went to Russia from Germany and thence, my direct descendants at least, to Denmark. I am pretty tied up with Russia, even as a child, lived there engaged to a Jewish writer in 1974, returned 1988, have an MA in the language... would love to know what you know of the Huguenots in Russia. This is my first foray into it... I live in Wellington NZ to where my grandpa Abraham Heinrich du Fresne came at end of 19th century. Jacqueline

Good to hear from you, Jacqueline.

When I was doing all my reading on Huguenot history in the early 1990s, I was concentrating on Britain, Ireland, Holland, Germany, Switzerland and the countries very close to France. I didn't even think of Huguenots going to Russia or the Baltic States, much less to countries outside Europe. Now we have to be a bit more sophisticated in history writing.

I knew about Peter Carl Fabergé being of French origin of course, but his family arrived in Russia in the early 19th century.

One book that you might find interesting, at least in part, is "War, Religion and Service: Huguenot Soldiering, 1685-1713" by Matthew Glozier and David Onnekink. Matthew Glozier, who wrote the Russian chapter, is at Sydney University.

I can absolutely understand why Czar Peter the Great would have been well pleased in having skilled Frenchmen arriving in his nation - skilled in language, professions, trades, goldsmithing and military life.