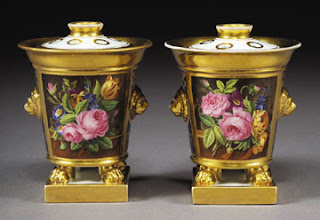 So which is my favourite porcelain manufacturer? From the French porcelain makers, I particularly like Darte Freres who made truly lovely objects. Founded in 1801 and active throughout the following thirty years, Darte Freres objects combined high technical quality with colouring and decoration typical of the Empire and Restoration styles. This pair of footed bulb pots displays the high quality of the painting: beautifully painted flowers.

I also love Royal Berlin, Coalport, RS Prussia and Rudolstadt, but a good piece of Royal Vienna is hard to go past.

The Imperial State Manufactory Vienna was founded in 1719 by a Dutch businessman, Claude Innocentius du Paquier, who was awarded exclus­ive rights to produce porcelain in Austria by Emperor Karl VI. Royal Vienna was only the second European factory, after Meissen, to produce hard-paste porcel­ain. The factory was best known for neo-classical figures.

When his imperial privileges expired in 1744, du Paquier sold the fac­tory to the state. The factory continued to pro­duce quality porc­e­l­ain, with scrolls, fol­iage and swags of drap­ery. Figures were made in an appealing style; dining ware was elegant and class­ical. It only ceased production in 1865, largely due to comp­et­ition from mass production factories. 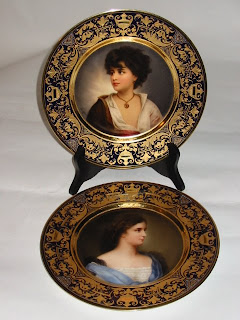 I am not expert enough to detect an original Royal Vienna from a later version. This is because after 1864 many other small factories in Austria could use both the name Royal Vienna and the famous beehive mark under the glaze. And trickier still, several factories from other countries bought the old moulds and made reproductions.

The original Royal Vienna factory never made portrait por­c­elain and certainly could not have done so after 1865 (when most of this type of porcelain was produced) since it no longer existed. So most of the portraiture produced came from smaller, mainly Aus­trian fac­­t­ories, which rep­licated the Royal Vienna beehive mark and sold pieces as true Royal Vienna. I find some of these pieces utterly beautiful. 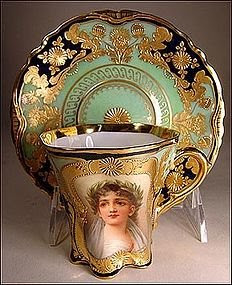 Other companies opened up for some time, then closed or amalgamated eg Oscar and Edgar Gutherz in Altrohlau which opened in 1898 and closed in 1918. But the world had changed after WW1 ended. And so did porcelain-making
Posted by Hels at 11.1.09

4 CommentsClose this window Jump to comment form
Hels said...
Hi Margaret,
many thanks for your post. I have referred to your information in my own discussion on C19th porcelain, carefully citing your blog. And I will continue to watch what happens to these old and venerable companies.


acornmoon said...
It's strange but when I heard first heard of this news I thought of you! It seems that there may be a buyer but will they save the jobs at the Barlaston site?

I went to visit the design studio called "The round house" last year. The journey took me through the beautiful, rural parkland of the Wedgwood estate.

Time will tell I suppose.


Margaret said...
--Thank you for citing my blog, Hels!

--I certainly hope that they will figure out a way to save people's jobs, Acornmoon. I guess we'll just have to wait and see!