Who was responsible for the tragic Wall St New York bombing of 1920? 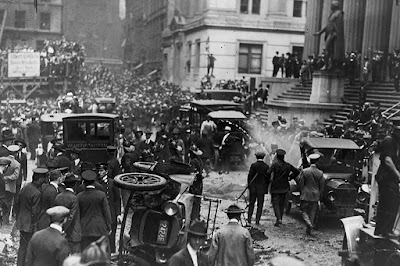 Wall St, immediately after the explosion

Wall St in New York was a global financial centre. In 1920 the stock market thrived and smart business lunches called. At noon on 16th Sept 1920 an ordinary man driving a horse-and-cart drove in, and stopped the animal with its heavy load of dynam­ite and iron weights. He was in front of the U.S Assay Off­ice, across from the JP Morgan and Co Bank headquarters, the stock exchange building and Federal Hall.

At first it wasn’t clear if the explosion was an intentional act of terrorism. After all no wealthy Wall St bankers were kill­ed and the victims were all ordinary workers, vendors and clerks en route to lunch. JP Morgan himself was holidaying in Scotland. And NO money was stolen from any of the banks during or after the bombing.

But scattered through the streets, mixed in with the explosion’s debris, were c500 pounds of metal window-sash weights. Most casual­ties had been hit by the metal shards packed in with the dynamite, indicating that this was a deliberate bomb­ing. And it was spec­ific­ally set off in front of JP Morgan, the heart of U.S capitalism.

Even so, forensics were not well developed then. Crews cleaned the damage overnight, removing phys­ical evidence that would have been crucial in identifying the criminals. There was a pow­erful sen­se that the market needed to reopen and by the next morn­ing, Wall St was resurrected. Broken windows and workers were plastered, streets were washed down, and the bomb-material was buried.
Anger over capitalism and wealth inequality had been growing in the U.S for decades. In 1916 ten people were killed and 40 injured by an explosion at a San Francisco parade. Authorities initially focused their attention on well-known radicals and anarchists in the city. In fact 2 radical labour leaders, Warren Billings and Thomas Mooney, were convicted and sentenced to hang, but with little evidence of their guilt both sentences were commuted to life in prison. They were both eventually pardoned, and the real bombers were never identified.
Anarchists were in any case thought to be re­sponsible for bombings & assassinations from the late C19th until the early C20th i.e an­­archism was seen to have become the defined political ideol­­ogy in Rus­s­ia. So U.S investigations started with an immediate focus on rad­ical leftist polit­ical groups. Even before the Wall St bomb, th­ere'd been nation-wide raids on communist centres, given that Bolsheviks were plotting to overthrow the U.S gov­ern­ment. Violent anarch­ists, social­ists and communists were thought to be at the core of a movement to unsettle capitalist institutions.

It was a already time of social upheaval, with 25% of workers on strike in 1919 in search of higher pay and decent working condit­ions. It was said that even prior to the 1920 attack, bombs had been sent through the mail to Morgan, John Rockefeller and Wood­row Wilson. But as the packages never reached their targets, where was the evidence of these bombs? 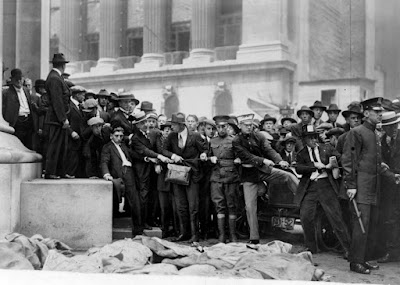 The bodies were covered then taken away by ambulance
New York Police and Fire Depts, Bureau of Investigation, and the U.S Secret Service were also pursuing leads by searching Italians. Based on earlier bomb attacks, the Bureau initially suspected followers of the Italian Anarchist Luigi Galleani. But the case couldn’t be prov­ed, and Galleani had fled the country. Another dead end!

A let­ter carrier had found earlier printed flyers from the American Anarchist Fight­ers Group, demanding the release of political pris­on­ers. Disc­overed AFTER the bomb, these flyers seemed similar to ones used in 1919 in two bombing campaigns run by Italian Anarchists. The Bureau tried to trace the printing of these flyers, but failed.

Nonetheless Italian anarchists were now primary suspects, partially from their assumed frustration about the treatment of Italian immig­rant an­archists Nicola Sacco and Bart­ol­omeo Vanzetti. They’d been arrested for murd­er­ing a guard and pay­master near Boston early that very year, 1920!
Investigators’ focus soon shifted to Mario Buda, long­ time It­alian activist and Sacco & Van­zetti associate. Did he do the bombing in revenge for the indict­ment of Sacco and Van­zet­ti? No-one knew. Buda was never brought in for quest­ioning, and he returned to Italy soon after the Wall St bomb.

The NYPD, FBI and private detective firms began investig­ations. An early suspect was Edward Fischer, an investment-world employee of a well-regarded brokerage firm. Just before the bombing, he sent notes to two former bosses, telling them to get out of Wall St at exactly 3 o’clock Wed. But Fischer, described as the victim of a nervous break­down and mental damage, was in Toronto at the time of the bombing. Authorities briefly questioned and released him.

In 1919 young J. Edgar Hoover got a job running the so-called Rad­ical Division at the Justice Department; it was designed to gather information on radical groups & political organisations. He made an early surveillance system by creating a data­base of all the radicals in America. After the bomb, known anarchists and comm­un­ists were located and questioned via Hoover’s system, then tips rolled in and eye­witnesses gave evidence. Hoover thought that the bombing was directed by forces in Russia, but again no arrests were ever made. 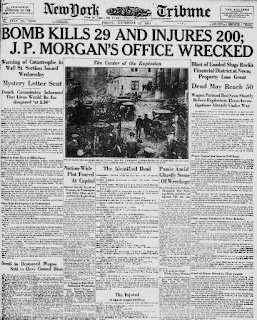 How did the relentless fear of Russian and Italian workers lead to them being pursued for every violent crime, yet no evidence was found in any single case? Even when the Italian anarchists Sacco & Vanzetti were found guilty of murder and later executed, it was still without evidence. In the same anxiety-provoking atmosphere of the Wall St bomb, oppression of migrant anarchists continued unabated - without any charges ever being laid.
Posted by Hels at 12.1.21

Dozens of people killed in San Francisco in 1916, the murders blamed on Sacco and Vanzetti in 1920, and dozens more killed in the New York bombs in late 1920...yet no guilty party was ever found. No wonder J Edgar Hoover's unpleasant career got off to such a flying start.

Hello Hels, By 1920, this was an almost unbelievable dismantling of a crime scene, but as has been pointed out, part of this was a message to the bombers that they did not succeed in their mission, and that business was going on as usual.

Crimes should be solved based on physical and legal evidence, but police and administrations try to avoid panic (or cover their own skins) by showing that they are making progress and arrests, which often lead to the railroading of victims. Groups or individuals that publicly oppose and protest the government are setting themselves for suspicion, but there is a big difference between groups that want to deny a portion of the population their rights, and those that want to unseat the entire government.
--Jim

and there were more crises during and after WW1 that I didn't mention. Huge bombs exploded in New York Harbour in July 1916, killing five people, jostling the Brooklyn Bridge and shaking building foundations in surrounding states. Was it a terrorist attack by Germans?

I would not have thought that police and intelligence authorities making absurd decisions were either a] avoiding panic in the general population or b] covering their own bums to protect against future court cases. But events of the last two months have changed my mind totally. I suppose that groups that publicly oppose and protest the government are indeed setting themselves for suspicion, but recently the groups who created the chaos believed they firmly SUPPORTED the real government.

Do you know if there were any claims, credible or not, made about who did this? It seems strange that someone would create that much carnage and not want it to be known why they did it.
The evidence around Buda seems to be circumstantial and probably would not stand up in a modern court of law.
CLICK HERE for Bazza’s enormously escapist Blog ‘To Discover Ice’

I too find the entire story totally unbelievable .. it was a massacre that killed (40) and seriously wounded more civilians (150) than in most WW1 skirmishes. The physical evidence was cleaned off the streets on the night of the bombing, and all the witnesses knew nothing. Every anarchist in the country was closely investigated and some were deported, but none was arrested or tried.

Note that the police, Bureau of Investigation and the US Secret Service investigations continued unsuccessfully from 1920 to 1940, and only then was the file closed.

At least I know about this case. I suppose it suited political purposes to steer blame towards the aforesaid. Whoever did bomb the innocent ordinary workers in Wall Street has so many deaths on his, and no doubt it was a he, conscience.

Mostly we understand unionists and anarchists attacking banks, insurance companies and investment institutions. And we are familiar with the wealthy and powerful attacking labour unions, opposition political parties, migrants and peace organisations. So why didn't the Wall St bombing play out how we would have expected i.e the migrants and anarchists being charged, tried and executed? Especially since soo many innocents died.

I am pleased you enjoyed the post, but no advertising please.