Benjamin and Pearl Wonsal lived in a tiny Jewish village in central-east Poland. Their first son was born in 1881 and eight other children followed. Benjamin emig­rat­ed to Can­ada in search of a better life, and in 1889 Pearl and the child­ren ar­r­ived by steamship. They changed their name to Warner, then made several moves around North America. In 1896, Ohio became the first site of their businesses.

Only 4 Warner children became active in the film busin­ess: Harry (1881–1958), Albert (1883–1967), Sam (1884–1927) and American-born Jack (1892–1978). The brothers began as travelling exhib­itors, mov­ing across Ohio & Pennsylvania with their portable project­or. Re­c­ognis­ing the pot­ential of films, the Warn­ers con­vert­ed a vacant shop in New Castle Pennsylvania into a cinema. They be­g­an buying cin­em­as and soon owned a film distrib­ution company as well. 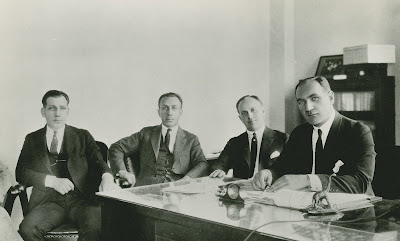 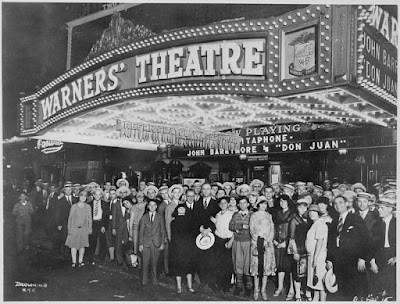 People wait to see the opening of Don Juan in Warners' Theatre, NY, 1926

As their enterprise pros­pered, they opened more theatres. Due to st­rict patent laws and the high cost of securing films, they start­ed producing their own films. By 1912, Sam be­came the studio's tech­nic­al chief, Albert did distribution, Harry was business head, and Jack was the showman in charge of production. Just for historical context, Paramount and Universal Studios were both founded in 1912.

Warner Bros was originally found­ed on Sunset Boulevard. In 1918 War­ner Brothers scored a coup with My Four Years in Ger­m­any, from the book by the US Ambassador who’d been ordered home from Berlin. It was an important picture.

The brothers gave Rin Tin Tin his very successful debut in a short film, Where the North Begins. The dog dominated the silent screen in the 1920s, almost won an Oscar for Best Actor and helped make Warner Bros financially successful.

Al Jolson always worked, doing a tour of his own show, then vaude­ville and a Sunday theatre series. Finally he went to Hollywood to make films. But it took till 1927 before the Warners produced their first talk­­­­­ie, The Jazz Singer. It only had 2 min­utes of talking, but it earned a very special Oscar at the Academy Awards! Sadly Sam Warner died in 1927.

The remaining brothers built a studio on farmland in Burbank and this new facility enabled Warner Bros to produce movies rapidly; 86 feature films in 1929 alone! The Studio’s contract players  became some of the greatest stars ever, including Bette Davis, James Cagney, Humphrey Bogart, Edward G Robinson and Errol Flynn.

The times were good, following the financial and critical success of The Jazz Singer. They now had the money to buy two of the most popular backlot sets shortly after: New York St and Brownstone St.

During the 1930s the Warners acquired the Stanley Co. which had con­trolled 250 cinemas, guaranteeing them outlets for all their films. They set the standard for film musicals with the lavish Gold Dig­gers series (1933); real news films like G-Men (1935) and China Clipper (1936); and big films like A Mid­summer Night's Dream (1935) and Ad­ventures of Robin Hood (1938). They also pres­ented social is­sues such as The Life of Emile Zola (1937) and The Black Leg­ion (1937), which involved racial or religious bigotry.

Read Lara Jacobson for a discussion about film-making once the 1939 war started. It was a contentious topic in a terrible era. The Brothers were not advocates for violence, nor was Confession of a Nazi Spy (1939) made to elicit declaration of war against Germany, but they wanted to inform their audiences of the threats over­seas. Clearly Confession made an impact; it was unlike any other film being produced and set the stage for change in the film industry. In 1939, they also released Wings of the Navy and Espionage Agent, continuing to focus on American patriotism and depictions of Germ­any as the enemy. Then Harry Warner declared the company’s goal of aiding the European war in 1940.

In 1951 the Co was forced to divest itself of its theatres after the film industry lost a 13-year suit brought by the US Government on anti-trust charges. And later, during the McCarthy witch hunts sweeping Hollywood, the brothers fiercely defended their actors. 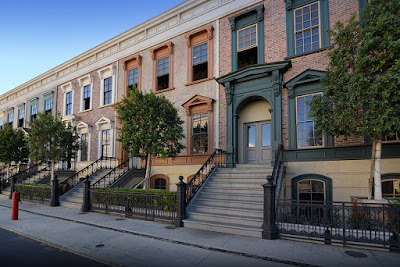 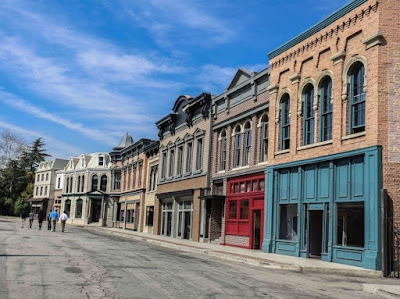 A falling out within the brothers in the 1950s led to an on-going family div­is­ion. In May 1956, the three brothers ann­oun­ced they were putting Warner Bros. on the market and sold their stock. How­ever in a tricky deal, Jack bought back all the stock and became the new company president. In 1958, aged 76, Harry died.

Great successes in the 50s included A Streetcar Named Desire (1951) and A Star Is Born (1954) and Rebel Without A Cause (1955). The exterior residential set next to Midwest St was built for the Ronald Reagan film King’s Row. With its store fronts, grass lawns, church and central gazebo, the set also served as home to laun­ch the career of James Dean in East of Eden (1953), Robert Preston in The Music Man (1962) and John Wayne in The Shootist (1976).

But the boldest move was into tele­vis­ion which most Americans had in their homes by the middle 1950s. War­ner Bros quickly pro­duced a wide var­iety of sitcoms and action series, debuting with the western ad­ventures Cheyenne (1955) and Sugarfoot (1957). Also launched that decade with now-classic series Maverick (1957), 77 Sunset Strip (1958) and Hawaiian Eye (1959) many of which were filmed on the Studios’ former Western backlot. Like many Austral­ians of my age, my parents had tv by 1960 and these western adventures by Warner Bros. were our favourites. 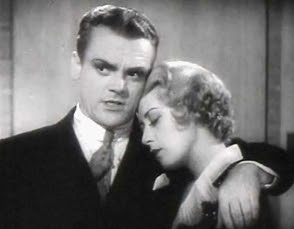 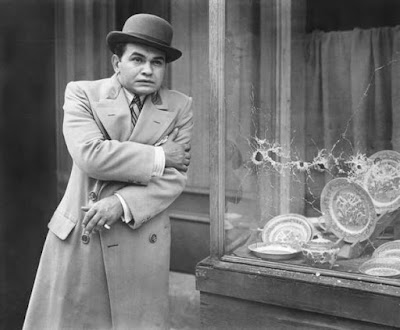 The Jungle Lot was to resemble any wooded area and lagoon that War­ner films or tv programmes would need. And adjac­ent to the Main Lot, a circle of residential houses was built, hosting television sitcoms like Dennis the Menace (1959), Bewitched (1964), I Dream of Jeannie (1965) and The Partridge Family (1970). Unlike the action series, this Australian teen thought these 1960s sitcoms were awful.


Warner Brothers Company was one of Hollywood’s entertainment giants.

Lots of families have in-fighting but that does not mean that the crisis cannot be repaired. Except for the Warners, it would seem.

Hello Hels, The Warners arrived at the perfect time to take advantage of the new picture industry. Of course, every era has its opportunities, such as the recent computer-silicon valley-internet phenomenon, but the Warners (and other moviemakers) greatly contributed to the world's cultural capital. We still watch old movies on the late show, and discuss how great they were, but how many people crank up an old 1990 computer, or do their work with Lotus-123?

Your mention of the movie-set lots reminds me of how often when watching movies and tv shows we recognize the same sets and props being reused. They might change a roofline a bit, but we still get that feeling of deja-vu.
--Jim

I have heard that many times, too. Jack and Harry seemed to have had a very cool fraternal relationship for years, but it became terrible when Harry found out about Jack's decision to sell the Warner Bros. And it became even worse when Jack secretly planned a syndicate that grabbed control of the company. Jack, who was always seen as a toughie, made himself a total crud when he declared himself President.

Would I work with my brothers every day? NEVER

I had never heard the expression "back lot sets", back in the day. I assumed that camera men went to another city or country to find exactly the type of location they wanted to film. Then in the late 1970s my son and I went on an organised tour around Hollywood, and found it very cleverly done.

Hi Hels - fascinating history ... which I didn't know about. Jack was a clever chap to buy the whole lot back ... and I'd love to do the tour you had to find out more about them ... just so interesting - thank you - all the best Hilary

Agreed. Everyone knows the films, music and books from their era, but who knows the background stories from before (or after) their era. So I know everything there is to know about The Beatles, Mamas and Papas, Simon and Garfunkel. But I wouldn't recognise Rihanna or Pink if I tripped over them in my kitchen.

How much more so for film makers.

What an interesting history. They slowly built an empire. Unlike you I loved American sitcoms, but I don't watch American tv or films now. My Four Years in Germany sounds enthralling, as does Where North Begins. The rest I know and are good. Oh, so sad to learn about the circle of housing for all those tv shows.

I don't think I have ever seen a silent film. Not a 90 second clip of Charlie Chaplin being a tramp, but a full film. What would our generation make of the Warners' brilliant early successes?

Hello again, I can't believe you have never seen a silent film! Think of all you are missing--the Gish sisters, director Ladislaw Starewicz, Wings, early W.C. Fields, Clara Bow, Bessie Love, Fatty Arbuckle, Mabel Normand, Richard Barthelmess, early horror films, foreign silents, etc. etc. When I was young there was a PBS series of silent films that I loved, I think it was on Saturdays.

There are lots of classic film buffs who can spout every minute detail about old pictures. I didn't realize I was such an old movie fan myself until I typed this comment!
--Jim

The brothers were smart to go for vertical integration by buying outlets cinemas. I think it's interesting that their decision to begin producing their own films was due to being asked to pay too much. Often a seeming set-back can lead to great success. Serendipity!
CLICK HERE for Bazza’s famously fascinating Blog ‘To Discover Ice’

In many cases, the interests our parents encouraged and supported during the years we lived at home are the bases for our adult interests. In my case the parents were very keen on literature and ballet, but not very interested in cinema.

Every time citizens argue that taking in migrants weakens our countries, I feel like pointing to the Warners and others. These people were: well motivated to move to a new country, enthusiastic about learning English, hard working, family oriented and full of new ideas.